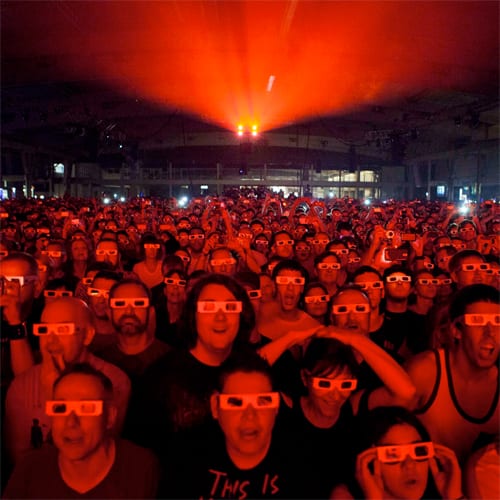 While there was quite a lot on show, for the most part it felt alternately like somewhat gimmicky product placement and some kind of introductory session for lay festival-goers. I don’t refer to the latter necessarily in the pejorative; explaining the comparative ease, tactility and potential of modern music technology is a sign of progression in itself, dispelling the smoke and mirrors surrounding electronic artists that draw praise and criticism in equal measure. However I was hard pushed to find anything that felt as groundbreaking as the platform had been described. The ‘Market Lab’, which showcased and sold a variety of musical services, controllers, etc., featured very little in terms of ‘new’ technology, as far as could be seen. The most exciting item I came across was the ‘Palm Top Theater’, a device that turns an iPhone into a small 3D viewing device.

Innovation, while not strikingly apparent in its complete form, was certainly supported and encouraged via the App Circus and Music Hack Day. The former showcased a unique platform for supporting burgeoning App makers, connecting them with industry leaders and financial backing; the latter challenged hackers to build a music app from scratch in 24 hours. Admittedly, I didn’t see Friday’s awards ceremony, but I am interested to see what was accomplished.

Sonar+D also included ‘Panels’ – debates, presentations and round tables – which explored various aspects of the music industry and its members, notably Matthew Herbert and Patrick Bergel’s presentation of The New Radiophonic Workshop, the BBC branch dedicated to creating new sounds, now under the artistic direction of Herbert himself. There were installations, too, although Robert Sakrowski’s ‘Skrillex Variations’ was a bit of a miss – not necessarily due to the controversial stature of its subject, rather because its artistic point seemed to be ‘the paradigm shift in consumption using YouTube, where fans of an artist…no longer behave as mere viewers or consumers, but instead become actively involved’, a paradigm shift that was explored with perhaps more artistic intrigue in 1977.

Skrillex’s appearance in the line-up itself came as a shock, indeed an outrage to many ‘connoisseurs’ of electronic music, but it’s difficult to blame the event’s organizers: Sonar’s development has in many ways followed the level and direction of international attention on electronic music since its 1994 inception, and drafting at least a couple of ubiquitous names (Diplo featured in two guises in one night) seems to reflect it well, with this year’s installment garnering an approximate 120,000 people (compared to roughly 3000 at Sonar’s outset). What harm can it be, to draw fans of EDM deeper into the realm and joy of electronic music, and Skrillex’s (generally non-consenting) forbears, if only by tempting them with a tattooed carrot-on-a-stick into an outright rave?

And what a raving good night Friday was. Of the many people I chatted to at the festival, lots of them Catalonians and longstanding Sonar fans, a large number were pleased that this year, a year of a sneered-upon line-up and scandalous venue change, was the year techno had a big voice. Now whether or not you or I agree with that analysis is another question, but Friday night had some snarling techno lungs: Objekt, in his pristine thunder, coolly warmed a huge crowd in SonarLab towards the all-live hardware onslaught of Karenn, before the innovator himself, Derrick May, dragged a still-respectable number of people (considering the height of the sun in the morning sky) into Saturday. And that was all after the smooth low-BPM of Nico Jaar, and the ever-impressive house and techno stylings of Oneman.

Elsewhere throughout the night, Dusseldorf’s electronic progenitors were casting ‘Kraftwerk’ in 3D (with comparative logistical ease, considering the task of giving out several thousand pairs of 3D glasses) to the reverberant chorus of ‘OWWWW-TOHHHHH-BAAAHHHN’ – what more can be said about these jumpsuit-clad pre-retirees other than their profound influence and our delight at their continued reluctance to retire?; Maya Jane Coles was initiating Richie Hawtin’s ENTER show, with a smooth, enveloping, albeit pretty straightforward set; Matthias Zimmerman was boogying on down; Bat For Lashes was banging wide the doors of SonarPub (and simultaneously looking downright spectacular in what could easily have been the most garish dress ever worn, if one can make such a physical comment without initiating ‘Bathgate’ Pt.II); and Two Door Cinema Club, if you’ll allow me to move further again from electronica, were as tight as a lamb’s arse. I even had the pleasure of chasing Jackmaster around in a bumper car.

Saturday brought the camp, supremely choreographed extravaganza of the Pet Shop Boys. The closing night of an affair such as Sonar tends to push you to the limit, or in my case, the back, but even from my comfortable vantage point, people were losing it. The man in front of me, hailing in the beginning of ‘Always On My Mind’, stretched out his arms with such cathartic enthusiasm that he was genuinely in danger of hurting himself. Next door, in SonarPub, the Ed Banger crew were marking their 10th birthday. They haven’t aged as well as The Pet Shop Boys. While Busy P, in his infinite self-celebration, was matched by Justice, Breakbot was rising far above his Ed Banger cohorts with his brand of French-compressed funk (which included a live interlude with a band whose name I missed; they unfortunately drew quite negatively from the momentum). If partygoers still hadn’t had their fill after DJ sets from the likes of George Fitzgerald, Maceo Plex, and Bambounou; or live shows from Delorean, Anstam, Phon.o, and Benjamin Damage; Laurent Garnier returned, following last year’s closing set, to bring up the light of Sunday.

Sonar20, looking at other sites’ reviews, as well as the first-hand reports of veteran Sonarites, seemed to fare as well critically as the pre-festival prophecies insisted it would. The venue change was, oh, fine, we suppose, and Skrillex didn’t ruin the party to the full extent that was pictured (some reports even suggested him to be a HIGHLIGHT). People don’t like change, especially to something so sacrosanct as a music festival (I confess to a note of sarcasm there). Once a past image of an event has been established, however serendipitous and necessarily unrepeatable, paying customers seem to consider it their customer-paid right to elevate that captured moment, and the organisers’ responsibility to preserve it irrevocably.

This, it should be resoundingly obvious to announce, is impossible. Sonar20 recognised its past efforts and successes, and took a milestone gamble with their format. Electronic music is growing internationally, spilling in many regards into the mainstream, and whether the self-perceived ‘inner circle’ likes it or not, big establishments (such as Sonar) are likely to celebrate and accommodate that. The fact that this year has been Sonar’s most successful to date is a huge achievement, considering the current state of the music festival industry (not to mention the electronic festival industry). If it has become more mainstream, it’s a far sight better than most ‘mainstream’ festivals, in that it at least attempts to push its own borders. Sonar has never had a reputation for sentimentality, and if anything, Sonar20 celebrated that.