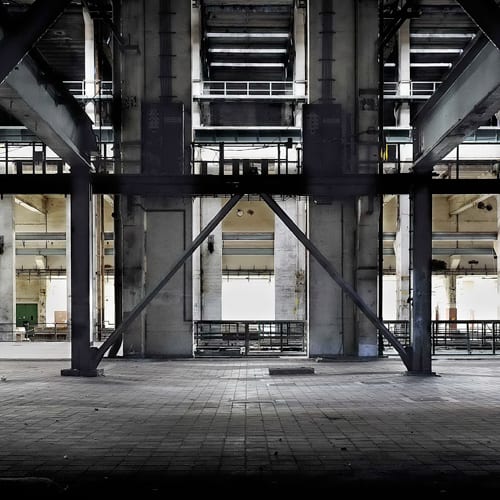 After a twenty three year hiatus the legendary Berlin Atonal festival returns to the capital of innovative music. It’s new home – Kraftwerk Berlin – is a long-abandoned heating plant in Berlin Mitte, a mazy industrial complex that will host 6 days of world-class musical events and large scale audio-visual installations as well as streetfood and a full catalogue of seminars, lectures, master-classes and screenings.

The theme for the first edition of the relaunched festival is ‘Forming Space’, paying homage not only to the darkly majestic architecture of Atonal’s singular new home and its public re-emergence after years of abandonment, but also to that basic and vital impulse of all art, namely, the desire to give form to the void.

The return of Berlin Atonal after 23 years is simultaneously the public premiere of our brand new home on Köpenicker Strasse – an abandoned powerplant turned industrial cathedral which will host a very special opening night for Atonal 2013.

The second night of Berlin Atonal 2013 sees a feature concert by a seventy-six year old legend of the experimental music tradition, a European premiere, and two specially devised audio-visual shows, all at our exclusive new home on Köpenicker Strasse.

On Sunday, Berlin Atonal changes things up. Starting early in the afternoon, Atonal brings in renowned Berlin night CONTORT to curate a special extended live show which acts as a tour through terrain mapped out by some of Europe’s most innovative live performers including Ancient Methods, Russell Haswell, Rashad Becker, Samuel Kerridge and many more.

For a special Tuesday show Berlin Atonal 2013 turns its attention toward the dancefloor. This unique club-oriented night preserves Atonal’s insistence on the innovative, the unusual and the audacious, but brings these characteristics to the party. Four very talented producers will present four exclusive live shows dedicated to the adventurous side of dance music.

For its closing night concert Berlin Atonal 2013 bids farewell with a show based around live instrumentation and experimentation.