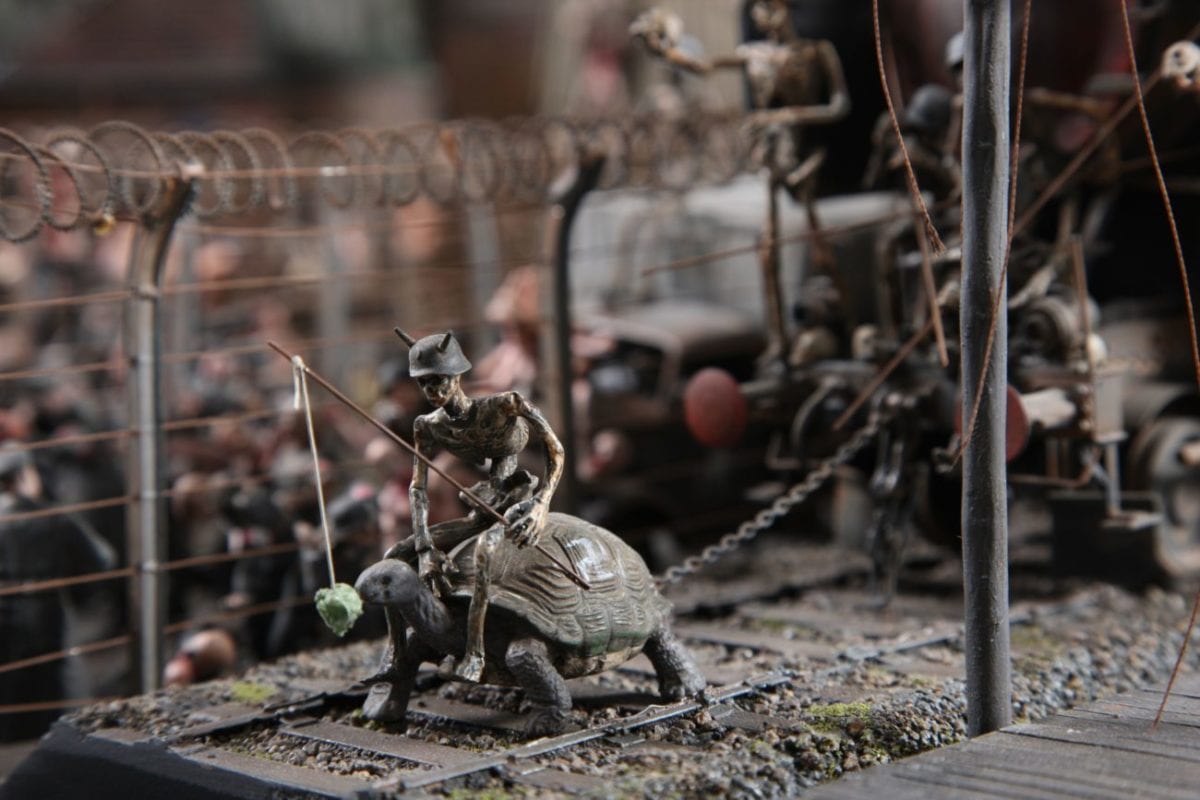 These two English brothers have worked as a creative unit since 1992. Their works, often of gruesome content came to public attention in their two shows “Sensation” (1997) and “Apocalypse” (1999) at the Royal Academy.

Their works range from childlike paintings on paper, installations, sculpture, painting and of course video art. Their provocative and transgressive pieces depict disturbing images amended with phallic attributes and iconoclastic connotations. It is difficult to describe their work in one word, but these words usually come to my mind, violent, disturbing, funny, ironic, dirty, horrific, transgressive, surreal, absorbing and terrifying.

Despite this I find the Chapman brothers extremely interesting, mostly because of the time they put into their works, quite literally “Fucking Hell”, i guess the guys at Airfix co. must be pretty happy in some kind of way.

Originally “Fucking Hell” (1999) was on show at the White Cube gallery in central London, it consisted of 9 glass cabinets arranged in a swastika formation. Inside the cabinets were tens of thousands of 2-inch high figures. Most figures were dressed in Nazi uniforms, performing the most egregious acts of cruelty.

“Fucking Hell” (1999) presented the viewer with a combination of historical, religious and mythical narratives. The effect of miniaturizing these subjects, is truly amazing, the detail and the time spent on creating each box is a feat of engineering in itself. But what truly engages me are the truly harrowing simulations that are happening before my eyes. It makes me look closer and examine each figure, their look in their eyes, their contorted bodies surrounded in chaos and frenzy.

The original installation was lost in an east London fire, which destroyed much of Charles Saatchi’s stored art collection. Who knows maybe this was an act of God ridding the world of these sadistic models….I doubt it though! Fortunantly here is a film of “Fucking Hell”, played to Samuel Barbers, “Adagio For Strings” (1936).