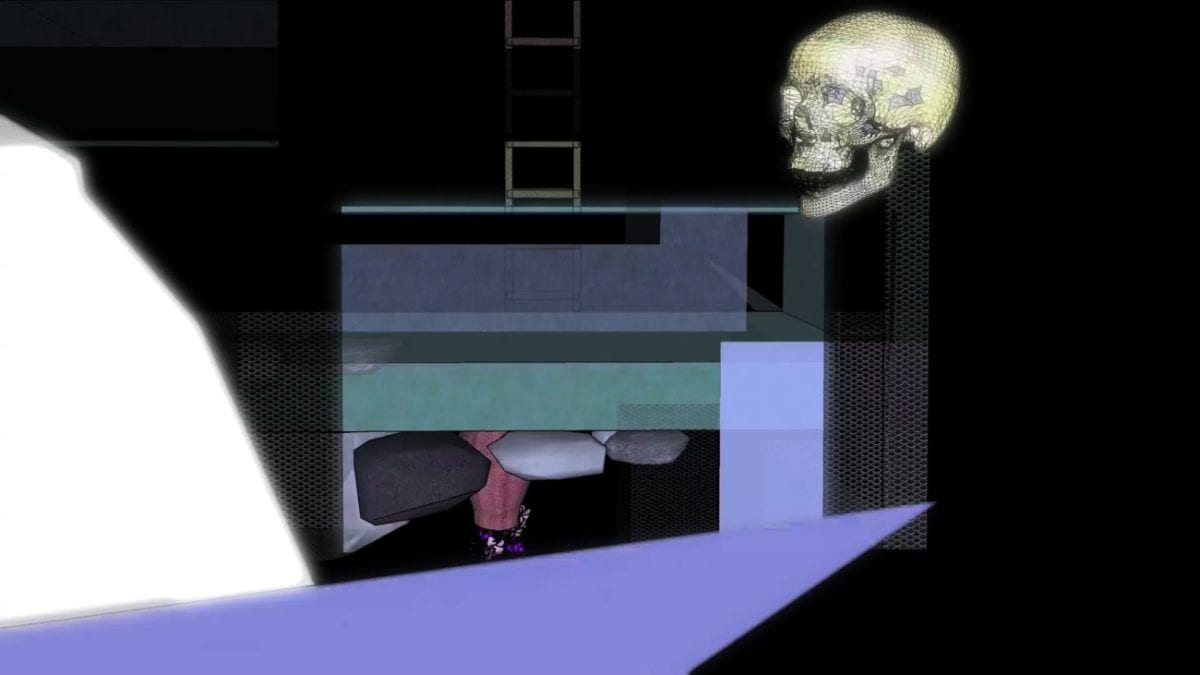 Oliver Jennings is an audio-visual artist based in London. Since graduating from Camberwell College of Art in 2013 Jennings has produced an array of work that includes music videos for Akkord and Synkro, live visuals for Craig Richards at Mixmag Lab and site specific field recordings of man made structures. Following his visual performance at Make Me’s 6th Birthday party with Ron Morelli we caught up with Oliver to learn about his approach to creating visuals and how he is developing his career with audio / visual agency Derelicht.

For those that don’t know, what exactly is it that you do?

I’m an audio-visual artist. I love creating moving image and sound in unconventional ways, whether it be generating club visuals by using architectural illustration software to create animation or collecting frequencies running through suspension bridges with contact mics to use as a soundtrack to a film, I’m always looking for new approaches to generating moving image and sound.

Since graduating from Camberwell College Of Art what have you been up to?

After travelling around Morocco with my girlfriend I got straight into some new projects. I made a video for Akkord, which was an interesting project as we used cymatics to allow the viewer to physically see the structure of the music, like an ancient, natural visualiser.

We are currently working on transferring this process into a live experience, which is very exciting. I’ve also been working on a commission for the Chelsea Flower Show in which I plan to create an orchestra of plants using a very interesting device, which translates biofeedback into MIDI sound. I am currently in Italy working with the device and on a plant-activity visualizer system.

You recently signed to Derelicht A/V Agency. Did you envisage that you’d become a professional visual artist at this capacity? What do you hope to achieve with the agency?

Yeah Derelicht is a very forward thinking label, which I really wanted to be a part of. The label’s ethos of developing their artist’s practices and balancing music with art and architecture is very inspiring. The live manipulation of visuals is a very exciting realm for me as it’s like an extension of the music video but with a performative element, which allows elements of chance and further experimentation with your media.

Your degree show “Every Object Has A Spirit” investigated the ‘sonic spirits’ of living plants and man made objects. Can you explain how this project came about and what you discovered from your experiments?

The idea that ‘every object has a spirit’ was the conclusion I made from this set of investigations into hidden sound that made up the film and installation. I used contact microphones to pick up and reveal minute vibrational soundscapes running through every day objects.

These frequencies for me became like a sonic spirit, every object having its own unique spirit. The contact microphones allow the vibrations to be isolated from everyday background noise and amplified to reveal sounds that are usually inaudible. Some of them were very striking; in particular the terrifying orchestral humming that runs through some of London’s big bridges.

Was there a particular ready-made object or living plant that permeated a particular note or resonance that you might continue to use?

The Millenium Bridge in London is a suspension bridge that hundreds of people cross at a time, I attached the contact mic to the wires and put my headphones on, immediately I was within the sonic world of the bridge, the tones were deep, orchestral and vast, it’s quite an unnerving soundscape to tap into so suddenly, and we are usually completely oblivious to it.

You’ve crafted a unique balance between the art world and the underground music world, how do you think you have achieved this?

I think it’s because I have fallen into the music world accidentally from an art background rather than consciously approaching it with the idea to make visuals that accompany music.

Also I think that electronic music at the moment is at a place where many are trying to break out of the formulas of the music world and move into new unexplored areas and contexts outside of the norm so I think it’s a good time to be working.

Have you always been interested in creating short films and manipulating visual images? Where did this interest stem from?

Yes I have always been someone who likes to put objects together and arrange things in ways which create new meaning although the interest in film has only come about relatively recently at university. I found that it allowed a much more dynamic representation of the things I was exploring on my graphic design course and I started to love the process, particularly editing.

Do you have a particular aesthetic or is it constantly evolving?

It’s constantly evolving according to what project I’m working. I think I do have an aesthetic but it’s hard to describe. I think that people’s aesthetic comes from millions of little observations, ideas, experiences and notions they’ve picked up and it’s hard to sum up what that is in one.

To date you’ve made a video for Akkord, visuals for Mixmag In the Lab and visuals for Ron Morelli. Which of these projects have you enjoyed most?

I’d say the Akkord project, as it’s developing into something so much more than a music video. They are both very inspiring to work with and have similar ideas to me so I’d say that and the Synkro ‘Recognition’ video, which consisted of filming flowers and liquids under powerful microscopes in a lab, was my first major commission, so is my favorite.

Do you have a pre-determined formula for making visuals, a template of some sort? Is the viewer expected to go on some type of visual journey?

I love unexpected narrative emerging from the way you place objects together. This is why this architectural illustration software I have been using lately for the visuals is a really exciting new area for me. It allows you to put objects in infinite black space and allows you to move through them, around them and into them with perfect perspective. You can create some epic and strange journeys and the way it turns out usually comes down to chance.

Do you think visuals enhance audio or that audio enhances visuals?

The fascinating thing for me with this subject is that you can put almost any visual with any sound and there will be a third added conceptual value or meaning that will emerge as a result.

It’s an infinite realm of possibility. They both enhance each other, when audio meets a visual it becomes one thing. I have found personally however that sound has the dominance; it seems to make you see new things in a visual.

For instance there was a psychological experiment, which found that if you pair one plain black dot with two ‘beeps’ you would see the dot twice. This in a nutshell I think sums up the effect that sound has on visuals in film.

Lets talk hardware and software. Can you take us through your production set-up?

It’s different for each job, I’ve used some unusual stuff before to make things work, such as USB microscopes, bio-feedback readers, contact mics, hydrophones, spectrum analyzers, anything that creates visuals or sounds. I generally edit on FCP, and use any camera I can get my hands on, usually 5d’s or 7d’s. Pretty standard set up really.

I’m not sure if you agree but there is an evident crossover with visuals between the arts arena i.e. installations exhibitions and the dance floor orientated world of electronica, do you ever feel like you have to make a choice or can both careers sit alongside each other in a complimentary fashion?

You can do both and create an interesting result out of uniting the two worlds I think. Having said that it takes a load of thought because in my experience nights out and art don’t mix very naturally. At the moment I’m trying to establish this balance, because I don’t want to be seen as a particular thing I just want to work on interesting projects with no label of what world it sits in.

Do you have any major gigs or installations lined up? Where could we see Oliver Jennings in the coming months?

I’ve only just signed to Derelicht so its early days but judging by how quick I got the Ron Morrelli gig, I’m sure I’ll be putting a lot of work out. I have an art installation at Chelsea Flower Show in May along with a tour with Akkord later on in the summer.

Discover more about Oliver Jennings and Derelicht on Inverted Audio.