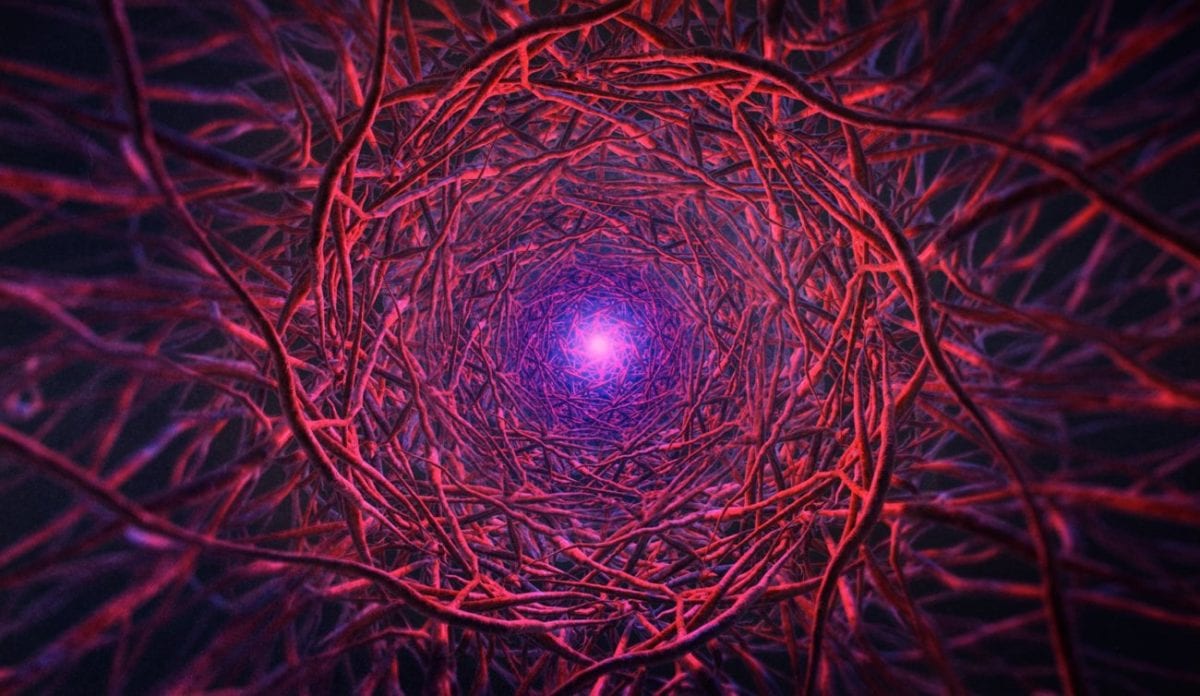 “‘FIELDS‘ is not such much an EP as it is an evolving Audio Visual experience, an environment, that leans more in the direction of a Steve Reich inspired minimalist piece than the beat-heavy territory of earlier Strangeloop releases.”

The Internet has become an integral part to our everyday lives. The majority of us spend our days online working, emailing, networking, sharing and listening to music, watching films and a doing a whole host of other activities, its uses are endless. For years there’s been a mixed opinion about the Internet and music, illegal downloads plummeting sales as the ‘dumbing down’ of society for relying on software and algorithms to help them discover new music as opposed to venturing into an actual record shop.

Let’s face it, the internet has opened up a colossal pandoras box for the music industry, exponential marketing and retail capabilities as well as meticulous feedback on what people like and don’t like as well as the rapid distribution of leaked promos that can of course ruin an artists career. Sure the Internet we have today is rich in content, tools and capabilities, but our experience of it is linear. We’re cemented into the formalities that browsers offer and what web sites display. That was until I switched onto Strangeloop’s fields.tv audio visual web site.

Strangeloop AKA David Wexler is known mostly for his live-visual executions accompanying an unending list of artists: Amon Tobin, Flying Lotus, 12th Planet, and most of the Brainfeeder roster to name a few. Strangeloops new record ‘Fields’ is a 3 track EP released on Brainfeeder, which can be bought and experienced as part of an interactive audio visual website. Fields.tv was inspired directly by an experience while in an altered state of consciousness, Strangeloop heard a composition which he tried to create directly after, the result being a fluctuating subliminal epic in three sprawling and unique movements.

The track names correspond to three movements within a psychedelic trip; of initial birth and constellation, through to death / dissolution, and then finally a transcendental union of both.

Of course Strangeloop was not the only person behind this monumental audio-visual project. A man named JP Cutter is the person behind the architecture of the website, whilst Gavin Gamboa developed and designed the site layout, structuring and interface. We took the opportunity to get in touch with Gavin to find out the finer intricacies of fields.tv

How did this collaboration begin?

I initially came into contact with David Wexler’s work at a Video Art Festival we were both featured in here in Los Angeles that was organized by the artist/impresario Marci Pinna, a mutual friend of ours. She is very skilled at culling all sorts of talent and creating situations where new and exciting work gets showcased.

At this particular festival I can remember finding those early Strangeloop shorts rather compelling. Over the subsequent months David and I became more acquainted with one another, particularly via So Simple Records and their (now defunct) internet-radio programs, which we would both play music at from time to time. Actually, the whole reason I got started working with live video-performance was so that I could VJ at these incredibly energetic So Simple events. It’s where I really started cutting my teeth and refining a visual language that I would one day hope to call my own. I was intrigued with live video because it combined the sensibilities of a (musical) performer with the non-live technical precision I had come to appreciate previously while making videos and shorts.

Dave and I started getting together more often and not for any particular reason as far as I can recall. As VJs, I suppose we got along because we were able to exchange ideas, criteria and our own respective experiences associated with the craft. Indeed, the more I got to know David the more inspired I became; there is so much impressive animation and video work that he’s experimented with — it’s astounding. So you can imagine my astonishment when he approached me, I being primarily a musician and not a web-developer, to help conceive of a design for a web space that would function as the net component for his upcoming Brainfeeder ‘debut’.

He was very excited about expanding the notion of what an album can be — yes an album is built upon its inherently sonic foundations, and yes the boundaries of what makes an album have been explored and the ambit of those boundaries have certainly been extended by many other brilliant artists in the past, but the degree to which Dave’s visual topographies influence his music (and vice versa), along with the potentialities involved in combining into an online presence these differing but related aspects of his artistic production just made the whole thing seem really fitting for Fields’ multi-directional impetus: extending its tentacles into the virtual depths, if you will. Creating a completely ambiguous, user-driven experience based on people’s relationship to the net and on the net’s relationship to the self is something I really felt in accordance with, passionate about even, and it allowed us to continue this grand exploration that we by no means initiated, but which we hoped to re-engage with and to re-consider.

What is the ideology behind the web site experience? Is there a specific journey direction or is it arbitrary?

The ideology surrounding the site . . . what a tangled web of influences you’re attempting to extricate from me! Well, for one, I was very much influenced by David Foster Wallace’s description of the Samizdat in Infinite Jest, believe it or not. Obviously fields-tv is a lot less ominous and threatening (or is it?), but the idea that a particular piece of media could have the power to captivate you beyond your own control and seize upon your own cognitive capacities for self-preservation was, literally, the most frightening and fantastic idea I have come across in modern fiction. The samizdat is akin to the Medusa myth, so by no means is this a novel idea. But the way it was encapsulated into holographic media in DFW’s version and then catapulted into my imagination via highly descriptive written language was unforgettable, and particularly salient, I believe, for all of us living in this Second Modernity — the information society.

Another ideological thread that informed the creation of fields-tv was the inference of a psychedelic visual language as extolled and pondered by Terrence McKenna, among others. Furthermore, I for one am a proponent of this notion of bildwissenschaft — the only English approximation of the term being ‘image science’. The paradoxical nature of the image, which is so potent that it can replace memory in order to become an image of memory itself will become highly crucial for our global society to study, to harness and to describe; its methods and application will need to become widespread if we are to survive as a species. The educational potential alone in utilizing a language of images in order to disseminate concepts and ideas is severely undervalued in the current educational paradigm, unfortunately. But it seems to be the direction we are slowly moving in. I am intensely interested in this line of inquiry and research.

As for the site itself, to get back to your question: the experience is ‘guided’ to the extent that the user opens channels for their own meaning to take shape in and to manifest from. It is by no means completely arbitrary. The sequence has an arch, but it is nuanced and certainly not explicit. Form follows function in the labyrinthine sense; an ancient, mystical maze-like entity emanating from an alternate universe the likes of which Jorge Luis Borges was fond of.

How close was your working relationship with Strangeloop during the project?

I worked closely with Dave in the initial preparatory period. We discussed what the site should embody and what the experience should be like: what kinds of functions we wanted, etc. After that point, he made it quite clear to me that he didn’t want to micromanage everything that I was working on, and was very encouraging and supportive of the idea that I make it something unique and that I have fun with the project. This gave me the freedom to try out and expand upon our initial approaches. So I was given a certain license to experiment, and from time to time I would show Dave the progress of the site, at which point he would give further input and direction. I think the amount of trust that was mutually involved made the collaboration flow very smoothly. Towards the time of the launch, we began working more closely again, fleshing out everything and verifying what we had come up with.

Where did you spend the majority of your time working on the project and how long did it take?

I spent most of my time developing this site at my grandparent’s home near Los Angeles. At certain points I also worked with an extraordinarily talented programmer, JP Cutter, who helped assemble some of the more abstract architectural elements of the site. Needless to say I was in solitary confinement for many, many months. We began discussing fields-tv around March of 2011. Shortly after I began writing code.

How did you build the website? HTML 5 or some other web wizardry?

Initially we talked about using HTML5, but decided to use ActionScript 3.0, the scripting-language built into Adobe Flash, because at the time HTML5 was (is?) still in the early stages of being widely adopted and standardized.

Was Bjork’s Biophillia campaign an inspiration / case study for you both whilst working on the site?

I am unfamiliar with Björk‘s Biophillia in particular but really admire and respect everything her and her team are able to put together. She is and continues to be an exciting and innovative figure, for me at least. I think researchers like Peter Weibel and the work of Nam June Paik, Alexej Shulgin, Ray Johnson, Stelarc, Hélio Oiticica and Jeffrey Shaw have held more sway over me, particularly during this project. Although some of their methods are perhaps more recalcitrant and theoretical/conceptual, I still believe that fields-tv in one way or another addresses the equivocal stance that is championed in their artistic gestures and philosophies.

Fields.tv is a truly immersive experience and it’s certainly harnessing attention. What other projects do you have lined up for the future?

I’m happy to hear that you have delved into the mysterious realm that is fields-tv. What I am excited about are some upcoming musical projects of mine, like a large scale oratorio and various chamber music compositions, but two website-projects in particular stand out for me at the moment: first is a site dedicated to the 16mm film archive that I co-manage with Monty Cantsin called 3TON Cinema, aptly named since all of the hundreds of film canisters collectively weigh about that amount! We have acquired many vintage films: educational, political, scientific and other obscure curiosities and are currently touring the United States with a small selection from our archive. The second project is a redesign for the naboamusic net-label — champions of all things experimental and obfuscating! They put out some really challenging stuff but it’s exciting to be a part of it all. In particular, I think Eddie B. Rock’s Fist Album changed the game.