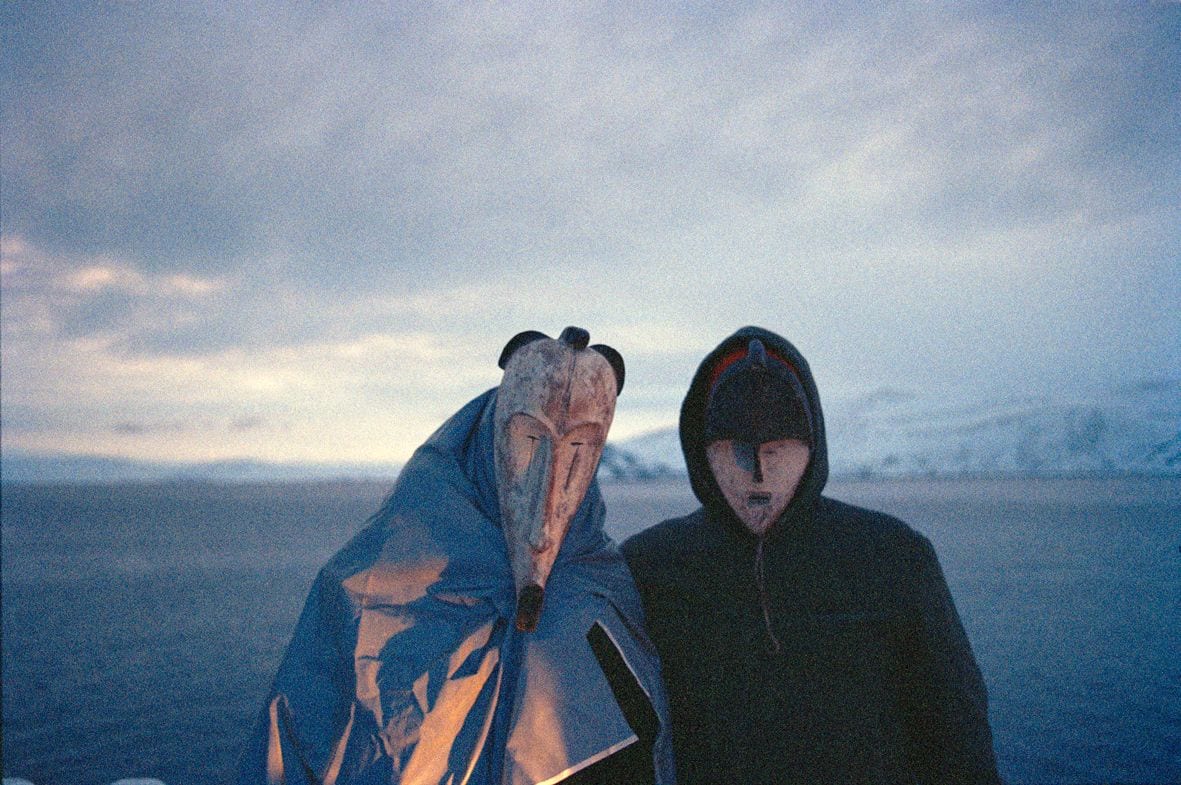 Earlier this year, an eponymous debut LP entitled ‘Ursprung‘ exhibited the collaborative efforts of Henrik Weber, perhaps better known as Pantha du Prince, and the producer Stephan Abry, formerly of the experimental band Workshop. Ursprung, which translates as ‘origin,’ borrows from many of the influences of each party’s earlier work. Weber’s ringing, processed bells and chimes are present at several points, with the duo focussing much of the album on the guitar.

In the interview we focus on the music video ‘Exodus Now’ questioning Hendrik and Stephan on the making of the video, its visual aesthetic as well as the reasoning behind their masked journey through the barren ice-capped Norwegian landscape.

How did the two of you meet and begin working together?

Hendrik: We met around 2000 in Hamburg, we started making music together at the recording session in Switzerland for “Black Noise,” after we used various places in Hamburg, Berlin and at the north sea to meet and play together and also record and produce.

When did the ‘Ursprung’ project arise?

Stephan: It took 3 years, it was not planned as an album, more a concept we had in our minds, to check if our interaction works. In the end it was easy, we liked the music so much that we continued with it.

On what premise did you decide to name the project “Ursprung”?

It just appeared to be the right name for a musical open approach. With influences of a wide range…

In what environments did you produce the album? Is the music contained within some reflection of  working environment?

Stephan: Most of the songs have been recorded “on location” near to nature….the last song “Am Buachaille” was recorded during the mixing sessions but relates to some field recordings from Scotland.

Hendrik: A lot of the titles give hints to places where we found a good moment. But we produced in my studio in Berlin as well as in Stephan’s atelier in Hamburg, also an atelier house close to the north sea in St.Peter Ording was the place for finalising the album. So a lot of the music probably reverberates in the places and the time they were made.

What were your initial concepts for the Exodus Now video?

Stephan: It had to be darker and angrier than the music, we also wanted to capture nature, so the ice-landscapes in Norway was perfect.

Hendrik: The masks came to me from a flea market in Berlin and they were immediately telling a story, so I was planning to use them for a video installation. The exodus now idea was close to both of us.

Tell us about the reasoning behind the location and environment portrayed in the video?

It is the far north combined with the far south, so there is a certain friction and weirdness within the landscape and the masks, I think it is opening up a lot of questions and at the same time working very well, a combination of diametric atmospheres – warm and cold, north and south, white and black – so a displacement that we had to combine with our music and that exists within the tracks.

How would you describe the overall visual aesthetic?

Stephan: I love the scenes outside with only artificial light, mostly one light from a streetlamp, mixed with the white surrounding – it’s so artificial. The rough digital quality makes the rest, especially when the light hits the lenses directly….

Hendrik: It is a kind of landscape film noir, maybe working as a contemplative installation.

The video features two masked figures – where did you source the masks from and what do they each symbolize, in general and in the video?

Stephan: It is like the music, the clash of  different themes.

Hendrik: The masks are from Gabun in Africa, they are good ghosts.

The video begins permeated with darkness. A chained dog, flickering torch and desolate coastal port serve as the backdrop, as it progresses the masked subjects end up on a voyage amidst snow-capped fjords – Tell us more about the journey portrayed in the video and its relationship to the track and the Ursprung project?

Get out there, leave yourselves. Leave the chained imprisonment. And find a new morning, if you want.

The overall atmosphere of the video gives an underlying impression that there is something much darker going on. How do you think the video works with the track?

There is nothing more dark, then only sunshine. The video reflects upon the title of the track, it is a metaphorical story about leaving. And going on a cruise ride, where you don’t know what will come. Leave everything behind, get out.

Despite the sub zero temperatures, what other challenges did you face in the production of the video?

It was pure fun, and of course the light needed to be perfect… because it was all filmed with a small digital pocket camera.

Who else was involved in the production of the music video, from concept to final editing? Can you explain what each person was responsible for and your relationship with one another?

Stephan: No further explanations necessary, we enjoy to produce everything as a team together, also for the visuals.
For the cover for example  we thought it should look like it was done by an advertising agency some time ago, and a lot of people hate it, which we appreciate a lot.

Hendrik: We just started, I brought the masks and the camera…and the ship was there already, as well as the landscape.

How long did the video itself take to produce from the initial concept to final editing? – What equipment was employed to shoot the video?

A momentary idea took us to do the video so it was a natural process, no start no end.

What does the future hold for you both in regards to continuing the Ursprung project?

Stephan: We are both very busy, but I hope we are able to go on with Ursprung, it will be very interesting to see where we end
up then…