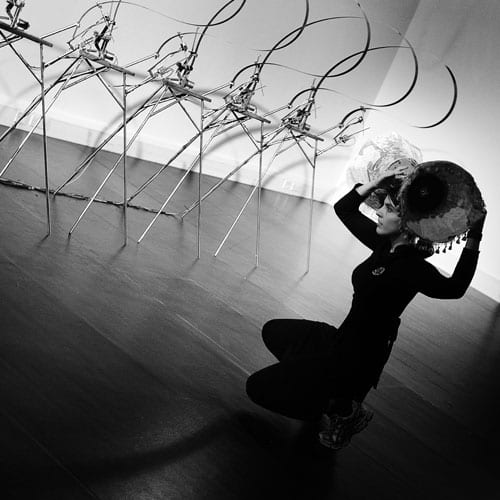 Brunel’s Electronic & Analogue Music Festival AKA BEAM was a welcome change from the foray of chemically induced, overly commercialized music festivals that splatter our summer months between May & August each year. This was an event for those willing to think well beyond the limitations of technologies and consider the past and future of sound design and live performance. With an array of workshops, installations, performances and debates, there was plenty to embrace.

As we entered the festival on Saturday morning, we were thrown head first into a debate between performers and attendees, discussing whether technology, and in hand, music technologies are developing along linear pragmatic lines, or exponential pockets of growth when someone has a bright spark. I boldly sat on the fence at this point, but believing in myself in possessing a reasonably artistic mind, the next discussion intrigued me as something I could personally relate to.

When trying to express yourself musically, especially when technology is involved, it’s possible to have too many choices and possibilities at your disposal, clouding your vision and surprisingly limiting your creative flare. There was a strong feeling within the room that by creating parameters within which you can work, pushing them as far as you can, and overcoming loggerheads, it will produce the best results.

This developed into discussing the performance itself and how to engage people’s senses in a more for-filling manner. Sarah Angliss was an obvious candidate to take the lead here. Trained in electro-acoustics, music and robotics, Sarah’s live shows integrate robots playing percussive and synthetic sounds to support her masterful Theremin playing. We then considered the idea of taking algorithmic / midi data from the performer to a third party, who in turn can use this to generate a visual aesthetic.

Soon after I found myself knee deep in ‘Dirty Electronics’ with John Richards . This involved building a two oscillator synth with filters from scratch [Yes, I did, yes… It works] which occupied us for a number of hours and provided us with something to take home and play with. Then, a trip round the rooms to check out the installations.

Louis McCallum’s Toy Music Machine used robotic arms to operate toy instruments, snares and drums all triggered by a touchscreen pad usable by anyone [I watched a wheelchair bound, elderly gentleman get his groove on…]. While upstairs Aleks Kolkowski: A Noise Of Stroviols gave an ethereal and ghostly atmosphere via a hanging string quartet brought to life through a matrix of tubes and wiring.

I had a long chat and demonstration from Tom Bugs, a self-made modular synth expert that has built his own brand of high end analogue electronics from scratch and now receives orders worldwide for his costly, but ultimately amazing patch-bay machines. Further highlights included performances from the likes of Leafcutter John & Tim Exile, as well an abstract offering from Atau & Alex, who re-appropriate I-pod technology [using the tilt and touchscreen interface] to create an expressive musical instrument. The festival drew to a close on Sunday afternoon with the ‘Mass Orchestra’ put together using all the weird and wonderful synths, sound boxes and circuit boards assembled over the weekend.