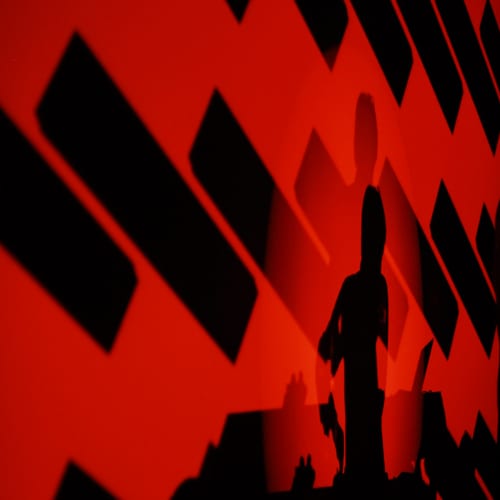 Deep within the underbelly of Shoreditch lies a club know to those who revel in this area as XOYO. On Thursday 7th July 2011 Alpha Pup‘s hip-hop crunching thoroughbred Nosaj Thing AKA Jason Chung graced the stage in this basement club for a unique audio visual live show.

Nosaj Thing is well known for his dense, filtered out electronic hip hop. His debut long player ‘Drift’ in 2009 escalated him to the forefront of the LA beat scene. So far in his career he’s produced remixes for Flying Lotus and the XX. His recent experiments of combining performance with live visuals have demonstrated a depth to his work that other artists have yet to achieve.

Despite turning up late and the stifling heat within the club, Nosaj Thing began his show with a languid beat that gently filtered into a more crunking beat. He seamlessly mashed together his usual classics as well as some other hip hop classics. Although the visuals were good, I personally thought the scale of which they were presented was not fitting for the experience. As the video attached shows the bigger the screen the visuals are projected onto the better the experience. Unfortunately the screen in XOYO was too small to achieve such an immersive experience.

The visuals were good but as a reveler told me afterwards, it was the same visual show that he had seen before. I was expecting more of an interactive performance, employing motion sensitive visuals that behave and interacted with the performers body movements on stage. I wouldn’t say that I was overwhelmed by the visuals, but I was definitely left satisfied by them.