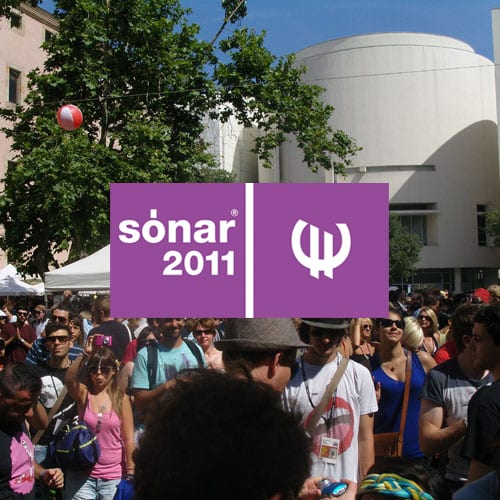 This year Inverted Audio were invited to attend and review the most reputable music festival in the world, Sonar. Whether you’re involved in the music industry or not Sonar is the one festival that anyone inclined to advanced electronic music must go to at least once in their life.

Since its inception in 1994 the city of Barcelona has welcomed Sonar to host and curate this spectacular festival. Over three days Sonar takes over the very heart of the cities cultural district, where the Center of Contemporary Culture and the Museu D’Art de Contemporari de Barcelona and its surrounding vicinity open up their doors to Sonar by Day, welcoming hundreds of performances and thousands of festival goers to replenish their musical appetites.

As a brand Sonar has expanded its presence across the globe to an array of urban locations including Buenos Aires, Sao Paulo, Chicago, Tokyo, London and many more. Sonar is without doubt ‘the’ most ambitious and well-organised music festival there is on the festival circuit. It’s simple, artists want to perform there and people want to enjoy themselves whilst soaking up the rays within the Catalan capital.

After three days of gently immersing myself into Barcelona’s languid lifestyle Thursday was upon me. After a swift pick up of my press accreditation and associated freebies I immediately entered Sonar by Day to scout out the venue and listen to a predominantly Spanish collection of performances from DJ Ragul, Nino and the Barcelona Laptop Orchestra, which if you’re a devout fan of experimental music AKA noise this would have been right up your street, I however couldn’t quite get past the fact that this was just a bunch of guys geeking out over their Apple Mac’s.

Musically the highlights for Thursday included Toro Y Moi, Floating Points, Little Dragon, Nicolas Jaar, San Soda and the Brandt Brauer Frick Ensemble, although the latter did experience a severe lack of volume on the SonarDome AKA Red Bull Music Academy stage as well as San Soda suffering a severe case of needle jogging on pretty much every piece of wax he played.

On Friday afternoon, whilst others enjoyed a refreshing siesta, Agoria took to the stage at SonarVillage and ruled it. The Infiné label boss played the most immaculately conceived DJ performance of the day. Bringing with him an ambient selection of sounds from either Murcof or Rone and gently injected a firm deep house beat on-top. His record selection was hard to fault with tunes from the likes of Tiger & Woods, Julio Bashmore, Lone and Vakula he truly mixed it up. A random downpour of beach balls further enticed the crowd into a groove by frantically hitting beach balls to one another.

Later that afternoon Katy B took to the Red Bull stage in which she sang her heart out. Even the most straight laced and heterosexual guys in SonarDome were getting their groove on, swinging their arms furiously to her sonic delights. Teebs followed with his shoe-gazed lo-fi Brainfeeder beats, allowing those guys who lost it to Katy B to re form, re-track and get their head nodding in sync.

Set deep within the minimal interior of SonarComplex, Tri-Angle Records showcased their finest musicians to an eager crowd. Beginning with a debut live performance from oOoOO followed by a superb performance by How To Dress Well and Holy Other, their showcase cemented Tri-Angle’s reputation as one of the most pioneering fusions of experimental R&B / Hip-Hop tinged imprints of the moment. Tri-Angle is without doubt one imprint I’m going to keep my ears firmly pressed upon.

For anyone who even briefly looked at the line-up for Friday’s Sonar by Night couldn’t help but quiver with delight from seeing Scuba prior to Aphex Twin‘s performance at SonarClub. These two entities are deservedly at the top of their game, the latter being so paramount that nothing comes close to comparing him to. Think of the biggest club you’ve ever been to and it doesn’t come close Sonar by Night, this complex is quite literally a hyper club, in sound, in quantities its simply awe inspiring and overwhelming.

Admittedly the Hotflush label boss Scuba AKA Paul Rose had a tough job on his hands. For anyone playing before Aphex Twin it’s a daunting task, especially in a 1500 capacity room focused entirely on you. With screens hanging from the ceiling displaying every detail to what you’re doing behind the decks it heightens the pressure to the extremities, one fuck up and people know in an instance. Scuba however didn’t let any of this interfere with his performance as he delivered track upon track of flawlessly pounding gut-wrenching techno. The perfect anecdote and prelude to Aphex Twin.

With his twisted backdrop of sexualised graphics and perverted riddles Aphex Twin began his performance with some eerie ambient soundscapes. This ambiance didn’t last long as he upped the tempo of his performance with an acid refix of ‘Windowlicker’ whilst embellishing the many twisted faces within the audience into his dot matrix visuals. I know it’s a given but this performance was quite simply a spectacle both for the music, visuals and crowd reactions to whatever they’d popped into their mouths.

For me the final day and night of Sonar promised to be a big one. DJ David Rodigan took everyone in SonarDome on a musical journey of reggae, dub, riddim and bass, whilst spurting knowledge over the microphone, reloads and pelvic thrusts, Rodigan selected a choice selection of tracks from King Tubby, Shy FX, Breakage, Caspa, Riva Starr and Major Lazer to the crowd. One of the most entertaining and encapsulating performances I’ve ever witnessed. For those who could put up with the sweltering temperatures within SonarComplex, Apparat treated us to a magically intimate live performance of new tracks, the highlight of which was the final tune ‘Black Water‘.

Unfortunately I missed Cosmin TRG‘s flawlessly executed performance before Tiger & Woods closed SonarDome with an energetic DJ set of sublime cliff-hangers and killer drops. The awesome duo played record upon record of uplifting house and disco to one of the most packed out and dynamic crowds at SonarDome. Sadly their final performance marked the end of Sonar by Day but also marked the beginning of Sonar by Night’s relentless session of techno from Stroboscopic Artefacts and the UK’s most talked about bass label of the moment, Numbers.

The final night consisted of sinister sounds from Surgeon and Silent Servant in SonarClub and relentless heart crunching techno from Lucy and Dadub at SonarCar. In my opinion the Stroboscopic Artefacts showcase absolutely killed it with their punishing set of industrial techno. Deadboy, Jackmaster and Lory D served up an enjoyable selection of riddim and bass at SonarLab allowing everyone to go gun finga crazy. For the grand finale the Night Slugs duo L-Vis 1990 and BokBok performed a tight back 2 back session at SonarCar and James Holden performed a mind expanding closing at SonarPub.

Overall Sonar was an amazing experience of cutting edge music, which I won’t be forgetting for a very long time. I’m already anticipating next years Sonar and I can’t wait to see which labels are chosen to showcase their talent. For me Sonar signified a celebration of UK bass music and techno. My top five performances go to Scuba, Aphex Twin, Lucy, Agoria and Tiger & Woods. Lastly I’d like to thank everyone who helped make Sonar such an overwhelming experience of electronic music, a truly well done job!