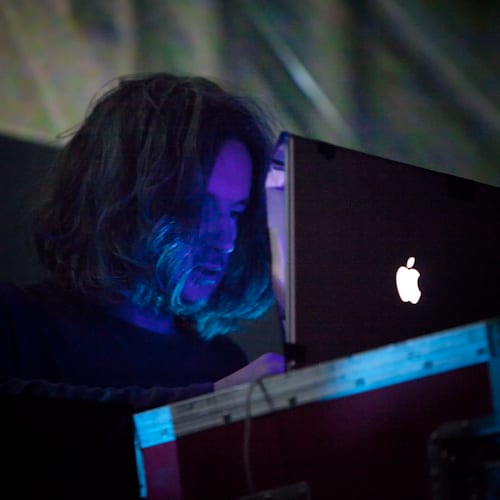 As with every Chris Cunningham show it was no surprise that this evening was a visual spectacle of twisted subjects, dark matter and ferociously loud abstract sounds. This is what ultimately the sole reason why people come to his live shows and of course to punish their eardrums.

Cunningham began his 1 hour performance with a hauntingly dark vision of New York’s metro system, pulling you into the dark tunnels and industrial stations alongside the legendary chants of Gill Scott-Heron. This introduction focused everyone’s attention almost immediately. Cunningham then cued up his most disturbing video of a little girl reclining in her room. A beam of light bolts through the window immaculately illuminating her. As if by magic indentations start appearing on her body, her eyelids are pulled back, her mouth pulled apart. This mysterious electrical current from the light above her is essentially controlling her as if she is a robot.

The one defining element that I enjoyed the most in Cunningham’s performances are the parts in-between the videos. In order to cue one video into another Cunningham blends each video into deep space. It’s as if you’ve been sucked into a black hole where the only thing you can hear is this menacingly dark drone noise encapsulating you. It’s a great piece of sound design, whch I would imagine Richard D. James is behind. It’s monumentally vast and epic, I cannot think who else on this planet could generate such a skin prickling sound.

Ultimately this live show was no different to his other performances. All that had changed was the order in which he played his videos. Overall I was disappointed with the lack of new material and older material in his show, what’s happened to the epic battle between Luke Skywalker and Darth Vader as well as his controversial video ‘The Triumph of the Will’? I believe these two video are his best, why can’t we see them, does he think we’re too soft?