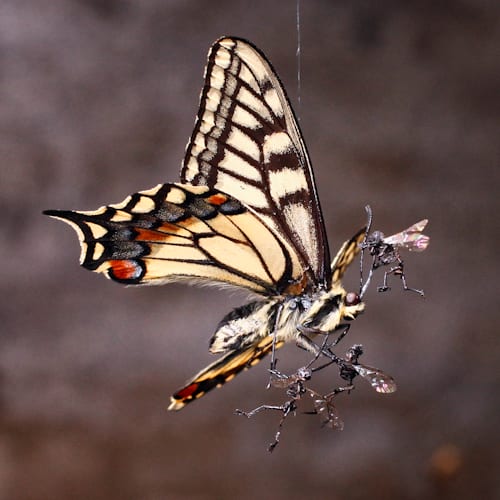 On Wednesday the 25th May 2011, Ninja Tune invited Inverted Audio to the launch party of Amon Tobin’s highly acclaimed album ‘ISAM’ at the Crypt Gallery in St Pancras Church, London.

Set within the dark, morbid underbelly of St Pancras church Amon Tobin and Tessa Farmer created an intricate dystopian fairy like art installation created to blur the boundaries between reality and fantasy, music and art to create a unique environment to experience the album and it’s artwork.

Illuminated throughout the atrium and hidden within the vestibules of the crypt was a vast array of insects, beetles, butterflies, bees and hornets suspended as if frozen in time, spinning and hanging whilst viewers brushed past them examining the next meticulously crafted creation.

Tessa Farmer is a highly renowned visual artist and sculptor, she specialises in creating miniature sculptures by using real life bugs and insects as well as decaying corpses. Having graduated from Ruskin at Oxford University with an MA, Tessa Farmer has since been hand picked up by Charles Saatchi and awarded a Royal British Society of Sculptors Bursary Award and the Vivien Leigh Prize, a sculpture residency in King’s Wood, Challock, Kent.

Being a Jake and Dinos Chapman fan I immediately started comparing Tessa Farmer’s dystopian sculptures to their miniature, model like creations, such as ‘Fucking Hell’ and their ‘If Hitler Had Been a Hippy How Happy Would We Be‘ exhibition at the White Cube in London, 2008.

In Farmer’s case her creations are significantly smaller and site specific, rather than Jake and Dinos Chapman’s method of containing their artworks within a glass box and adding more context and visual depth to them, Farmer on the other hand placed her sculptures within the crypt, utlising the space around her and and creating a totally different environment for her pieces and for the viewer to experience the space. Let us not forget that this installation has been created to celebrate the album launch, so what about the music?

Hidden behind the darker corners of the crypt were speakers strategically placed and synchorised with the album, on loop, to play specific parts and sections from Amon Tobin’s tracks from the album, giving the impression that whilst you moved through the installation you got to hear something different from the previous point of interest.

Overall this was a very ambitious album launch campaign for Ninja Tune to pull off, however it was refreshing to see the imprint commissioning Tessa Farmer to create the visual artwork for Amon Tobin. I feel that their collaborations worked exceptionally well together and that both artists benefited from each other as their creations complimented each other in so many levels, both visually and sonically.

‘Control Over Nature‘ is open to the public from the 26th May to the 5th June from 11am – 5pm. It’s free and is well worth a visit.