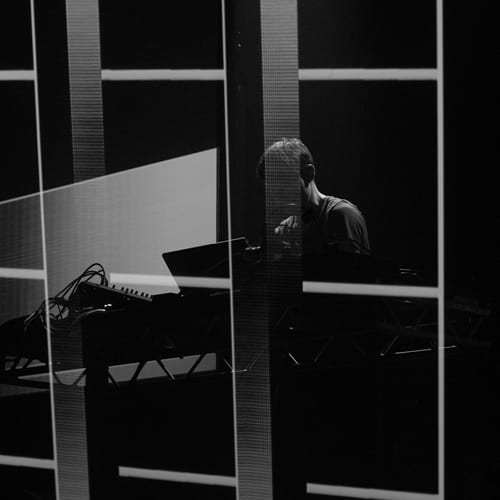 On Thursday the 12th May, Short Circuit, a festival celebrating electronica, hosted a very special evening of contemporary electronic music from key members of the Raster-Noton collective at the Roundhouse in Camden.

Since its inception in 1996 Raster-Noton has become ‘the’ most advanced platform for music that lies far afield from the norm. To date the label consists of about 100 releases made up of artists such as Ryuichi Sakamoto, Alva Noto, Byetone, Pixel and William Basinski. The collective’s aesthetic focuses on rhythmic, minimal electronic music alternating between playful pop and introspection, partnered with unconventional and equally minimal packaging design.

When Carsten Nicolai AKA Alva Noto and Ryuichi Sakamoto got together to record 2003’s highly acclaimed “Vrioon” album it probably hadn’t occurred to them that they were single-handedly re-positioning minimal piano music at the head of the electronic food chain. Alva Noto is now ranked as one of the most recognised representatives of contemporary music, whilst Ryuichi Sakamoto is regarded as one of the most pioneering composers in the world.

Once seated, all eyes turned to Ryuichi Sakamoto and Alva Noto as they entered the dimly lit and minimally composed stage. The stage itself consisted of what I believe to be one of the grandest piano’s there is, and from what I have read Ryuichi Sakamoto uses one of sixteen in the world. Alva Noto stood behind a white modular table upon which he had his mac. Stretching across the backdrop of the stage was a vast LED screen upon which Carston simulated intricate and beautiful visuals. As soon as they began their rendition of the first track it was instantly clear to me that this evening would consist of spatial swathes of electronica, white noise, piano stabs and a spectrum of Raster-Noton inclined visuals.

The duo performed compositions from their fifth body of work ‘Summvs’. Watching them perform live within such a vast environment and sound system it was hard not to be truly absorbed by the two artists on stage. Both Sakamoto’s evocative piano-based compositions melted effortlessly into Nicolai’s skillfully digital rhythms and cautious manipulations.

Atom TM was second in line to perform his take on electronica. Sandwiched between two screens of digitized green on black analogue computer text juxtaposed to the home recorded cinema footage he had previously made, he stood motionless head to toe in a quintessential Germanic get up consisting of slicked back hair, manicured moustache and a grey flannel suit. Despite the cold appearance the music he played was excellent and his groove to the beat was perfectly in sync.

Lastly Byetone AKA Olaf Bender performed a relentless hard industrial techno set, which considering everyone was still sitting at their tables was pretty strange. His music was very much more inclined to people who have a lot of energy to burn off. However mid set his mac decided to shut down, which kind of ruined the intensity of his performance. Nonetheless the symbiosis of his music with the intense red, white and black visuals were mesmerising.

For me this evening of live music was a real eye opener to the Raster-Noton collective and I am extremely glad that I got to see the legends that are Ryuichi Sakamoto and Alva Noto perform an absolutely stunning performance. If you get the chance to see them play I strongly recommend you do.