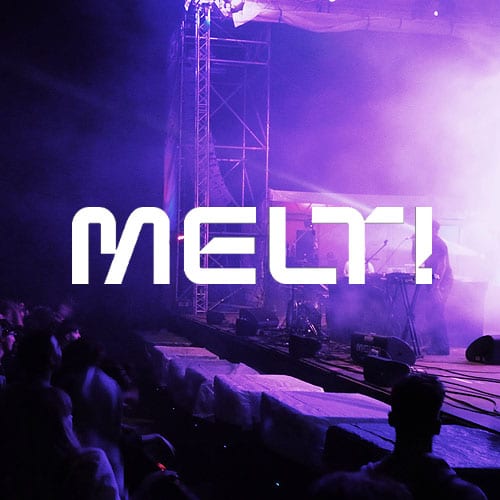 Melt! Festival celebrated its 14th edition this year on the now renowned site of Ferropolis (City Of Iron), two hours from Berlin. Melt! has built up a reputation as a growing mega power in the sea of European festivals that straddle the line between electronic music and more band focused programming.

Across 3 days and 5 stages with more DJs, acts and bands than you could hope for and the forever shifting ‘Sleepless Floor’, playing host to great DJs, live acts and label showcases, such as Live At The Robert Johnson and BPitch Control from Saturday 7.00am right through to Monday at 10.00am! It makes you feel like your ticket should cost more.

The hilly beach was packed early on to see Jamie Woon take to the stage with his three-piece funk band. Nicolas Jaar drew one of the biggest crowds of the weekend on this stage. It’s always great to see an act or band just when they are on the cusp of something great and this was definitely his time to shine. Although due to a fussy monitor situation his performance had to be shortened, however it didn’t dampen the crowd’s spirit and when those almost religious North African styled whaling brass notes sounded out the crowd went wild. Jaar’s unique brand of ‘Hotel House’ came across better than ever with his fully live band adding another dimension into the mix.

Sets from Gold Panda and Apparat Band were as solid as you would expect and fitted the lakeside setting perfectly. Friday’s main stage line up included highlights from The Drums, Robyn, Paul Kalkbrenner and Boys Noize. The Drums stole the show on the band side of things and Boys Noize’s 4.00 till 5.30 am set turned up the whole of Ferropolis to another level. Pulsating saw tooth riffs and basslines held the younger crowd on their toes.

The Big Wheel Stage had a solid line up from 3.00pm through to 7.00am with main sets from DJ T, Fritz Kalkbrenner, Loco Dice, Miss Kittin, Carl Craig Vs Radio Slave & to close Gui Boratto. Carl Craig and Radio Slave’s performance was very much as if two quite different DJs were playing back to back and that is essentially what was happening. That said Carl’s shorter to point attitude and mixing fitted Radio Slave’s drawn out approach pretty well. And as the sun came up Gui Boratto’s trance like sounds sat perfectly with the mood and scene.

Saturday bought some seriously sunny heat so the restless campers were eager to get to the festival site early. And good thing too as Pawel & RNDM, Lawrence, John Roberts, Redshape, Doc Daneeka and Damage were all playing before 9.00pm. That’s not to mention These New Puritains, The Hundred In The Hands, Patrick Wolf and Beady Eye.

For me one of the festival highlights was a lesser-known name Anstam who has recently released the awesome ‘Baldwin’ on Modeselektor’s 50 Weapons imprint. His set early on the Saturday was fairly minimal in his presence. A figure moved only occasionally; taking a swig of beer or lighting another cigarette. But it didn’t matter hearing his music on a sound system of this stature fitted his sound perfectly. He played mostly his own stuff, which was great and his unique fusion of fragmented jungle amens with glitch overtones reached almost Tayo styled cool & deadly bass levels!

Other performances of note were Bolton/Berlin based and DFA signed Planningtorock who’s set although clashing slightly with other must sees drew a strong and loyal fan base in the Intro Zelt Tent and came across a whole lot more upbeat then her latest album suggests. Later on after The Streets had played their last ever-German show- Dj Koze, Cosmin TRG, Siriusmo and SBTRKT wowed crowds.

Special note goes to SBTRKT who is now way more than a producer with vocalists. Sampha had until this point just been a vocalist for SBTRKT, but he proudly introduced ‘Hello! We Are SBTRKT’! He even gets his own voodoo mask! Live drums played to a high jazz standard along with electronic wizardry and yet more percussion from Sampha meant this was one of the best shows I’ve seen all year. SBTRKT’ although not qualifying for Mercury nominations this year due to the album being released too late, they are a shoes in for next years.

Sunday, the final day, and one I was really looking forward too, welcomed Ostgut Ton to the Big Wheel Stage. Ben Klock’s set was marred by the start of the heaviest of rainstorms but still held strong through to Marcel Dettmann. At this stage the mud had appeared and the stomping had well and truly started. They showed why they can sell out shows across Europe before a line up or venue has been announced. Brandt Brauer Frick played a 10 o’clock set on the sleepless floor, to the annoyance of many as they deemed them too important for such a small stage, although it was just a DJ set and not the full orchestra that made their name.

Pulp headlined the final night and drew a more than capacity crowd. I was drawn to the outrageous Les Savy Fav whose live YouTube videos have more than whetted my appetite, they did not disappoint!  Semi clad, sweaty and totally bonkers- perfect.

I went back to the Big Wheel Stage for Richie Hawtin. He played a slightly less banging set than you would think, probably a reaction to the Ostgut Ton performance. It made a nice change to the weekend; his set was almost played inside itself with loops and echo played out like a Jamaican with one deck and a echo box. The rain eased off for the last half resulting in a great finish to his set.

Overall another solid Melt! experience. It wouldn’t be complete without high winds; rain, driving rain and bleaching sun and heat. The line-ups were chosen carefully and created two festivals in one. Something that only the foolish takes total advantage of. If you plan carefully you can have the best of both worlds and as it is only two hours from Berlin, Melt! is one festival that should be high on your to do list.