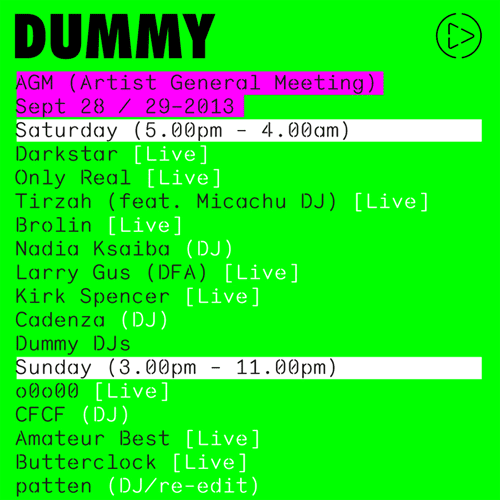 Dummy Magazine are throwing a two-day party at London Fields Brewery in Hackney on Saturday 28th and Sunday 29th September and we’re offering you the chance to win a pair of tickets to both nights.

So far Dummy have invited 17 acts to their AGM (Artist General Meeting) and most of them are playing live. Saturday acts include Warp / Hyperdub wonder boys Darkstar, which if you haven’t listened to their album ‘News From Nowhere‘ released earlier this year, we strongly recommend you do.

On Saturday expect a live set from free-wheeling West Londoner Only Real, who will be bringing his hazy guitar anthems and half-raps to the party (see his latest single Get It On for a fine example), while NTS DJ Nadia Ksaiba brings her faultless selection skills.

Food on both days will be provided by Tommi’s Burger Joint and Thank Cluck. Plus – in case this is a deciding factor for you – there will be beer.