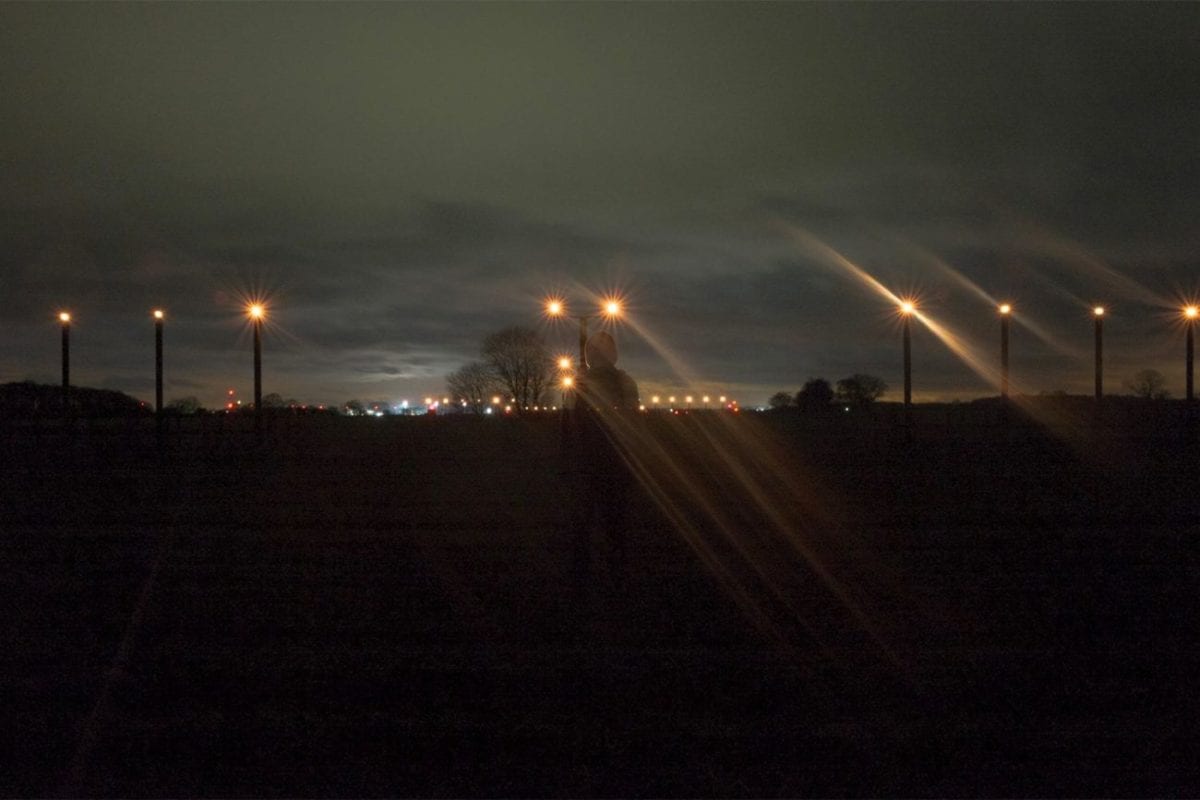 Back in October, London-based producer Klaus announced the launch of Tanum Sound System, a audio structure built gradually over the last few years with his friend Sean. Still reeling from the closure of Plastic People in 2015, Tanum was built out of frustration with the lack of decent sound systems available in the capital and a desire for alternative musical spaces to clubs. We caught up with Klaus to find out the finer details behind the system and the raison d’être of this long-haul project. 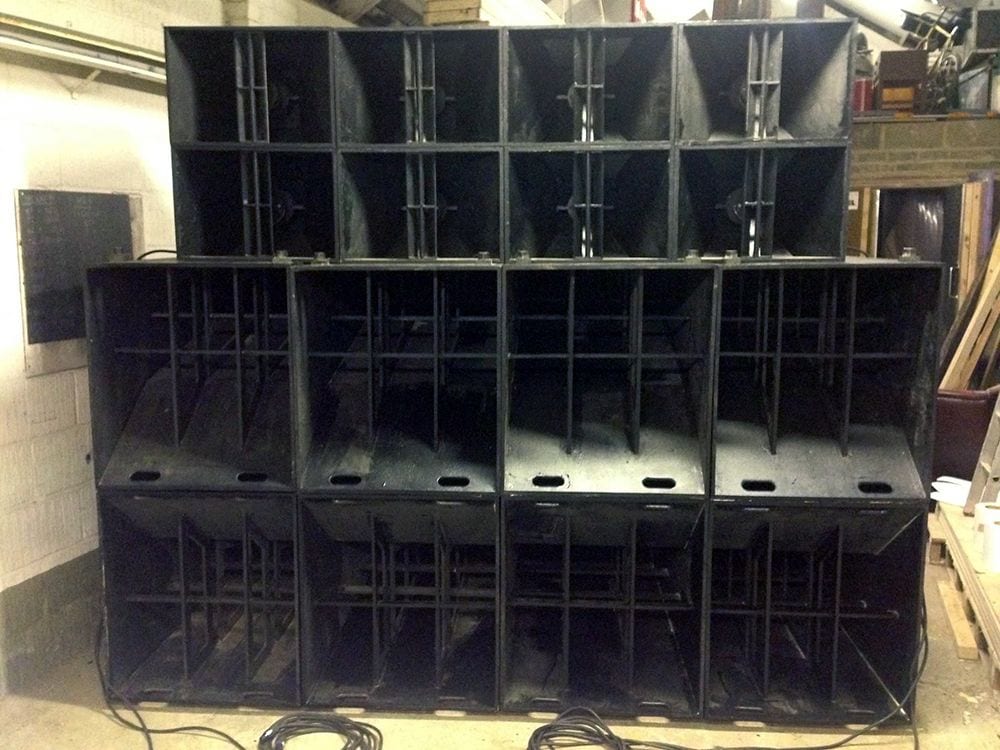 What spurred you to build Tanum Sound System?

Obviously we will never recreate Plastic People… the best sound will always come from a system installed in a room that has been designed and treated around it … but that’s an incredibly difficult thing to attempt in London at the moment. So the next best thing was building a system we can move around and doing the best we can in whatever spaces we can.

What are the determining factors for a quality sound system?

We’re no professional sound engineers, there are people much better placed to give advice on this, but just from our experiences so far, the main determining factor is probably the one you have the least control over, the room. Related to this, speaker placement in the room can make a huge difference, especially with bass response.

Then every single stage from source to ear matters… your cartridges, preamps, processing, amps, cables, drivers, boxes… if you lose anything from the source at any point you won’t get it back. But we would never try and tell someone how to do it, it’s a taste thing and all the possible variations at each stage contribute to each sound’s character. Difference is a beautiful thing.

Why did you choose to build the speakers you have built?

We did a lot of reading and research before deciding on these boxes. We knew much less then than we do now… I wonder if we would have chosen differently (or done it at all) if we were starting now.

We went with a folded horn sub design because one of our main priorities was clarity and depth of sub bass. When hearing a system for the first time, the point at which it starts to roll off in the low end is one of the main things I’m listening out for. After hearing a few tunes with varied enough sub content, you can usually tell if the system is managing to keep up with the tunes in this respect, or is struggling.

Again, the room and where you are in the room makes a difference there. But if the box is not capable of producing a frequency, or the processing has eliminated it, there’s no way of getting it back. And this always felt to me like obscuring the sound. Obviously different tunes, different types of music have different content, and musical value manifests in different ways.

I was always most interested in music that explored the full range of our hearing, that full palette always felt to me the most expressive, so when that full range isn’t available to express it, when the system isn’t capable of accurately representing the source in that respect, it feels like part of the music has been blocked off, covered up. 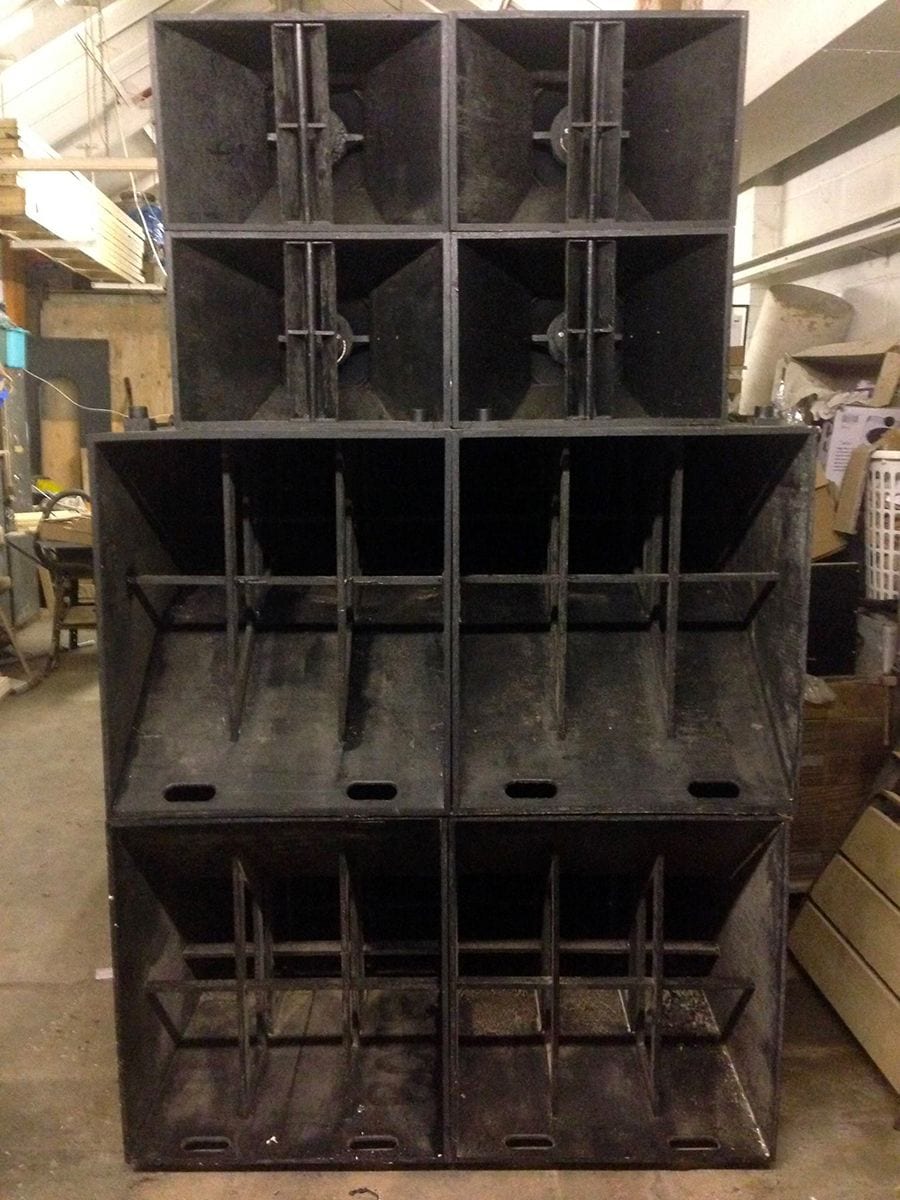 Folded horns have a certain character; I don’t fully understand the science of it but the horn allows a better coupling between driver and air than a direct radiating speaker, which means they are power efficient while still able to produce low frequencies.

There’s this thing called Hoffman’s Iron Law, about the relationship between box size, bass extension and efficiency… though the dream would be a box that didn’t need much power, could produce low frequencies adequately and was small, it seems you can only really have 2 of those things, and have to compromise on the third. So accordingly we’ve ended up with big boxes.

I like the sound of horns when they’re properly managed, I like how deep they go… but they are definitely a nightmare to move around, which was easy to ignore before they were finished… not so much now.

Our mid/tops are simple; a high frequency compression and 12” driver per box. I like mid and high frequencies integrated, I like to feel like everything is originating from the same source, so I’ve never been a fan of separate tweeter boxes, which is one reason we went with this design.

How long have you been interested in sound systems?

There were kids where I grew up building them which always fascinated me. But we got lucky in coming to London and going to Plastic People and Mass, experiencing a quality of sound which set a benchmark for us.

We’ve also been following sound systems for many years, particularly Shaka & Aba-Shanti. Their sessions continue to have that same feeling of focus and respect for the music, in the people and the sound system, that I miss from Plastic People.

It’s quite difficult, and scary, to think how different our musical values might be if we’d never experienced places like Plastic People. I guess we’d just be content with whatever else was about and wouldn’t care so deeply about sound. And it’s sad for me to think that it’s harder for younger people to have that experience these days, and that they might therefore have a totally different benchmark of good sound. But that’s the effect of deprivation, in any system. Take something away from people, let a generation pass, it disappears from collective memory, and its absence becomes normal. 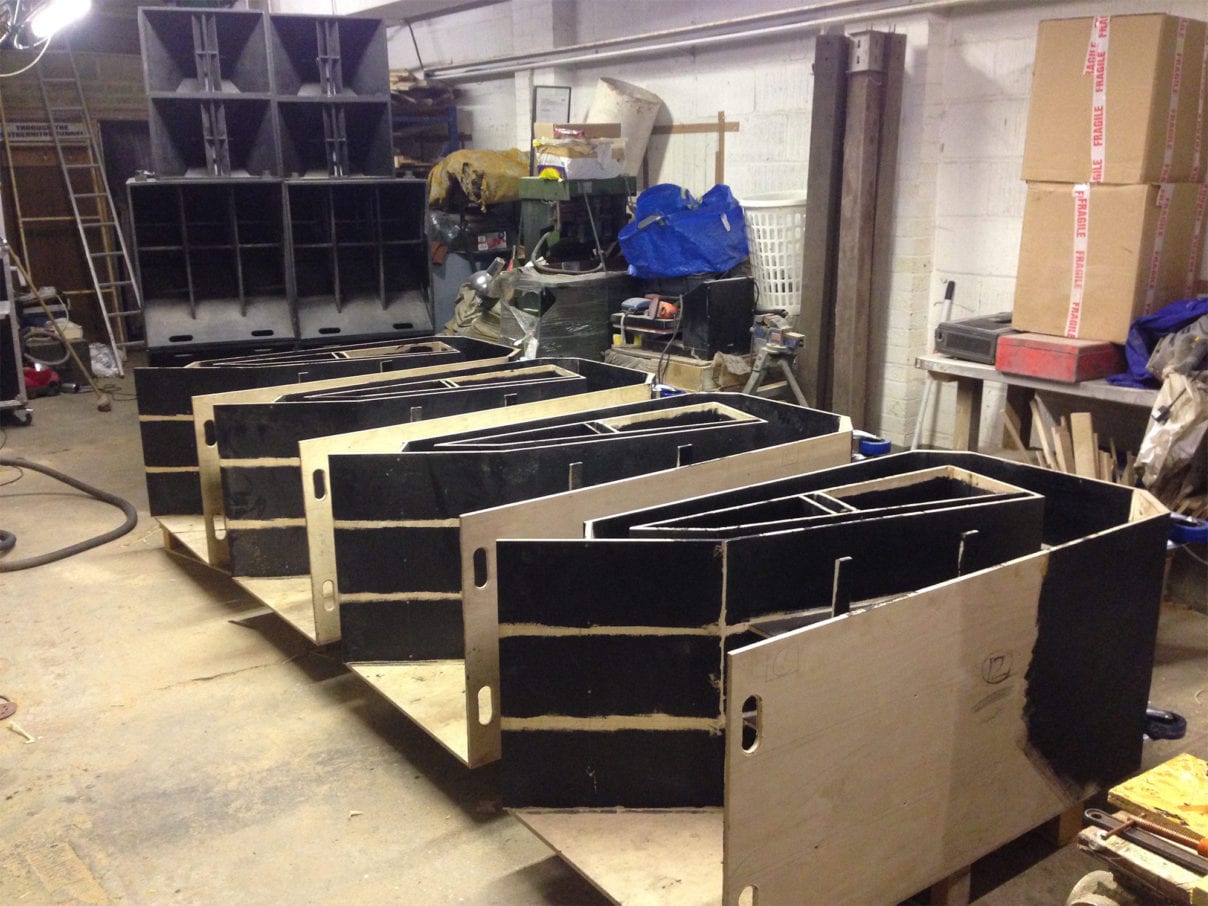 Who else do you have working with you on Tanum Sound System?

It was built mainly by my friend Sean and I, but it wouldn’t have been possible without the help of lots of other people.

Being based in London I am sure you can appreciate that it is not the easiest of places to host an event especially when it involves loud music. What spaces do you want the system to be used in?

I’ve always loved experiencing music in non-club spaces or outdoors, spaces that feel less exclusionary. The street, parks, community halls and centres… basically the last shared, common spaces for people to spend time that you don’t need money to enter. It’s so mad, and so sad, that it’s become so difficult here to come together and experience music in a free space. So any opportunity to use the system in an environment that does not involve money, we are really up for.

Regarding noise… this is a part of wider council agendas to displace undesirable poor communities who have lived in areas for decades and replace them with richer people who are willing to spend more money on everything. Noise is tolerated in certain areas, but only where it can be tightly controlled and serves the interests of capitalism, not the musical needs of the community around it.

And the complaints of the gentrifiers hold a disproportionate weight in this situation; a single person moving into an area where noise has been a part of culture way before they arrived can complain to the council and get a whole community shut down in an instant.

So yeah, in this climate, we must be mad for trying to do this but we’ll keep trying because we don’t want to compromise.

What’s next for Tanum?

We want the system to be used as much as possible. But we also want to be careful about how and where it is used. We want to give people who might not otherwise get the opportunity the chance to play and hear music, support people who are underrepresented, put them at the helm. And apart from using it for fundraisers for projects pushing back against the horrific shit going on in the world at the moment, we want to try to keep money out of it as much as possible.

So far we’ve only used the system in London – at DIY Space for London, a great space down in Bermondsey, Bar-A-Bar in Stoke Newington, and a couple of summer outdoor things on Well Street. We are in the process of organising a couple more things over the winter, and we’re doing our first session out of London in Northampton on 3rd February next year.

We’re interested in hearing from anyone who wants to put on a dance or use the system for community, not profit. So please get in touch – you can reach us via Twitter, Facebook or email.