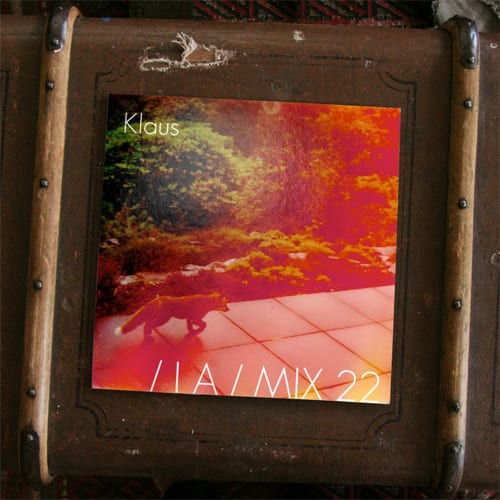 South London’s Klaus (AKA Nick Sigsworth) makes music that effortlessly straddles the ambient and experimental regions of the dubstep spectrum. drawing comparisons to the likes of Mount Kimbie and Airhead. As if confirmation were needed of his rise to prominence, Klaus has recently been signed to R&S, sharing label space with some of electronic music’s most vital current innovators such as Pariah, James Blake, Blawan & Space Dimension Controller. Listening to Klaus’ output so far it is clear the legendary Belgian imprint will make the perfect environment for his talents to develop.

We got in touch with Klaus after we published our mix from Seekae. Nick was kind enough to give up his time to record a stunning mix featuring a selection of choice cuts, and exclusives including his own eagerly-anticipated remix of Mount Kimbie’s stunning track ‘Adriatic’ (out on Hotflush in June), as well as Pariah’s forthcoming track ‘Left Unsaid’ due on R&S. We hope you enjoy it as much as we do.

What is your musical aim with your Klaus moniker? Is there a specific direction when you produce or is it merely a personal reflection of whats going on in your head?

I wouldn’t say there’s any aim or direction when I produce… I don’t really think about what I’m doing at all.  Kind of like Kode9’s transducer analogy, it’s more this sense of being a passive component in a circuit, being plugged deep into that loop between speakers and machine. In that zone things happen without much consideration or rationalization – actions become less inhibited, more impulsive, and I think that’s why I do it, in order not to think about anything, to move away from reality towards this more primitive state of mind.

You’re about to feature some tracks on a forthcoming R&S compilation alongside Pariah, Space Dimension Controller, Blawan and James Blake. How did your relationship with R&S come to fruition?

Well James is one of the few people I ever played my stuff to years ago; him and Mount Kimbie have always given me support when I’ve been doubting my sound, telling me to keep doing what I’m doing… Anyway, I ended up playing alongside James, Pariah and Dan R&S earlier this year… it was late and pretty empty so I was playing some of my stuff from dub, which Dan heard and asked me to send over. I’ve never really been comfortable sending things to people I haven’t met in person, so it was nice that it came about naturally like that.

When it comes down to inspiration, who do you take inspiration from and what provoked you to start meddling with electronic music?

First off, my parents would always be playing music when I was little… Bach fugues, Mahler symphonies, Rachmaninoff concertos… one of my earliest musical memories is listening to the Rite of Spring with my Dad. So that stuff is hardwired into me, I didn’t really have a choice.

Then I remember at school, there were these guys two or three years above us, who I never really knew, but they built this sound, called Cranky (this is back in York). And they used to do free parties in the woods, and though I only made it down a couple of times, I just loved the idea of it, taking these big stacks they’d built themselves out where no-one would bother them and rinsing them til dawn. I have a lot of admiration and respect for those guys.

Then there was a Mystikz article in the Wire, just around the time I first heard Earth a Run Red and Misty Winter, must’ve been 06. And that little article gave me a really powerful impression of what was going on in London, in the dances and on the pirates… I made it down to the summer blazedown in 07, heard tunes like Boiler Suit and Stand Against War, and that was it, I’ve been chasing the dragon ever since.

What can we look forward to from Klaus in the next year or so?

Hopefully, an accelerated musical output and a couple of releases. But I don’t want to make any false promises… this shit takes me ages.