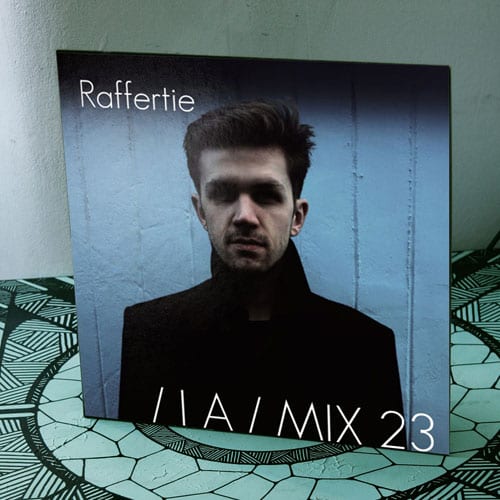 Raffertie AKA Ben Stefanski is a fervently independent character with a pragmatic approach to life. Over the past few years we have seen him make steady impressions on the underground dance scene, with a slew of releases on labels such as On The Brink, Seclusiasis and Planet Mu. His live sets are a well orchestrated mash up of the sounds he’s feeling, and Raffertie leaves no stone unturned.

Not one to be pigeon holed, he has worked himself out of the coined ‘dubstep’ bracket and made a new nest with friends at ‘SUPER’ recordings, signing music they feel accurately represents the present. When talking to Raffertie you get a firm sense that he is aware of the impact he and his cohort’s are making, without letting it all go to his head. Recently signing to Ninja Tune for his first full length album, something we look forward to with baited breath, the future seems set for our talented friend. As a teacher, musician, producer and live performer, Ben stands to have a long and illustrious career doing the things he enjoys the most.

Could you please introduce yourself, tell us where you are from and what influenced you whilst growing up?

My name is Raffertie. I’ve lived in a few places but I spent most of my time growing up in a seaside town on the south coast of England.

Influences…I suppose could be taken in two ways, musically speaking my influences are wide and varied, I don’t know about anybody else, but I get a bit bored reading lists of other people’s influences so I’ll spare you. Suffice to say I don’t think I really listened to anything particularly out of the ordinary when I was growing up but I have always been surrounded by music in some form or other, whether listening to or playing it.

Other influences that I have come to realise recently, perhaps some of the things I draw on most in a creative sense are the places I’ve been, things I’ve done, seen and particularly my relationship to and with these things.

How long have you been making music for and in what forms?

Almost 10 years now, I produce a range of music from instrumental to electronic, short and extended and everything in between.

The last few years have given you a chance to grow as a main stay in the UK electronic music scene. What do you see as the way markers that lead you down this road?

It’s difficult to say. There’s a lot of music being made in the UK at the moment which is very vibrant and exciting and if I am considered a part of that then that is wonderful.

Who are the team behind Super Recordings?

Super is run by JP and myself. We have an amazing photographer on board, Megan Sharp, and our press releases are written by copyrighter, Robert Mccorquodale.

What is your ethos?

You’ve made a conscious move to explore new directions in your productions after being tarred with the ‘dubstep’ brush on your earlier releases. Could you explain to us why this move was necessary?

I borrow and reinterpret stylistic ideas in my work all the time, but I never set out to make any one particular type of music. My early releases were never supposed to be ‘dubstep’ but I think because they were released around the time when the world at large was starting to sit up and taking note of this new founded genre, there were elements of it in those releases, my music got carried along with it. I would rather that listeners approach my work with a clear mind.

Could you give us an insight into your top 3 tracks on your playlist at the moment?

How would you describe your DJ sets?

When you record a studio mix like this one, is there any inspiration behind it, and your choice of tracks?

It really depends how I’m feeling on the day. I always try and create as much variety and contrast within my mixes while maintaining the momentum. This mix shows off a few new tracks that I have finished recently, remixes etc. As well as some tracks by others that have been working really well in the clubs lately.

Summer has practically landed, what do you have planned?

Writing the album. A holiday at some point. Going to one or two festivals and I’ve got a few releases out over the next few months so I will be getting ready for those.

You’ve just signed with Ninja Tune, how has it been working with them and what’s in store?

It has been a pleasure working with the Ninja’s and I can’t wait for everyone to hear the album!

What do you want to be doing in 5 years time?

We’ll have to wait and see…

Are there any artists and producers you’d recommend checking out?