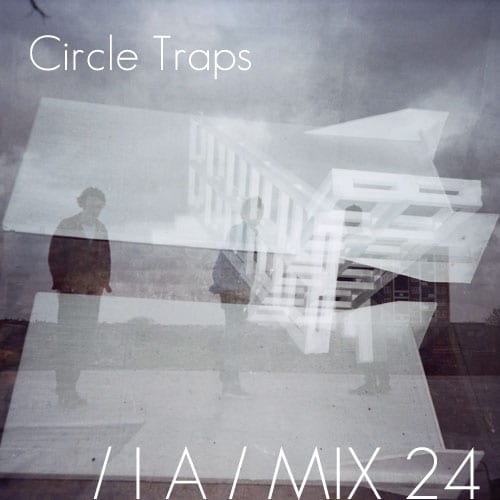 Circle Traps is a collaboration between Jack Wyllie, Duncan Bellamy and Will Ward. The London based trio recently released their self titled debut EP ‘Circle Traps‘ on Subeena’s fledgling imprint ‘Opit Records‘.

Since we discovered Circle Traps, we’ve been hooked on their instrumental and organic sounds. Their exclusive mix features everything from minimalism to jungle, via techno to world music with tracks from Ben Klock, Autechre, John Cage and Lukid this is one exceptional mix and interview that we’re proud to offer.

Please can you each introduce yourselves, where you’re originally from, how old are you and what were your ambitions whilst growing up?

I’m Jack, I grew up in Southampton and moved to London 7 years ago. Will and Duncan both grew up in Cambridge and moved to London at around the same time. We are 26, 25 and 24 respectively. As a teenager I always wanted to play a tenor saxophone in a jazz band, Will spent his teenage years wanting to be a jungle DJ and Duncan wanted to be an artist.

Duncan and Jack, what circumstances provoked you to bring Will on board with your musical journey and what elements of his work did you appreciate the most?

Duncan and Will are old friends and used to make music together in Cambridge. Duncan and I have been playing in Portico Quartet since 2005 and developed a em musical relationship through that.

We had planned to form an electronic outfit together for a while but had never found the time. The first tune we made ‘Mirrors and Monuments’ came from some chords I made by looping my saxophone and recording them into logic. Will started structuring them and working different effects in and Duncan added some drums. So it was and still is a very three way process, each of us working different elements on each piece as it suits.

What’s behind the name ‘Circle Traps’, and how did your relationship with Subeena and Opit records come about?

Circle traps and 2 of the track titles from the EP come from a random flick through a book trying to find words that sound good together, pretty arbitrary really, but for this project it was nice to be ambiguous with the names so the music could be free of connotation.

We met Subeena through Jamie Woon (who we live with) who met her at RBMA in 2008. When we finished our tracks we sent them over to Subeena. She liked them and we liked what she did and the music she had put out on Opit and decided it would be a good home for the EP.

What is your musical aim with your productions?

I guess it’s to create music that draws on our collective experiences as musicians/producers and posit them in the electronic music scene.

Would you say you make music for others or is it a personal reflection of each of your personalities and life experiences?

I don’t think the two are mutually exclusive. I think as an artist you have to be aware of what’s going on around you artistically and where you fit into it.

When we’re making music we’re not thinking ‘oh lets put this in because that’s cool at the moment’ or whatever. But as we listen to certain types of music, the music that comes out hopefully appeals to people who like that type of thing. If it didn’t we’d probably be doing something wrong.

To date what have been your greatest achievements?

Creating and releasing the music we have so far, touring internationally and being nominated for the mercury prize back in 2008.

Your music has an organic atmospheric feel to it, how do you go about producing your music to get achieve this, and what inspires you to create music?

Sometimes we use acoustic instruments and samples to play roles that would usually be more mechanized. The drum loop in ‘Bo! Symbol’ for example is a 2 second sample cut out of a 3 minute drum solo by Duncan, rather than being programmed in, likewise the washes in ‘Mirrors and Monuments’ are layered saxophones rather than synths. I think this makes it feel organic. A lot of the atmosphere come from an interest in ambient music, people like Arve Henriksen, Thomas Kroner and William Basinsky. I think David Toop’s book ‘Oceans Of Sound’ had a big effect on us all.

We recently saw your live performance at Netil House in Hackney, London. How do you translate your studios productions into a live act, what elements do you have to alter in order to achieve this?

It’s weird actually, in Portico Quartet we’ve always had the live stuff down first, then taken it to the studio. Circle Traps is the other way round. I think it’s important in the live show to get a sense of seeing a piece of music being created. Its harder to get a this across with produced music as you cant just play it in the way you created it, you have to go back into it and find ways of giving the pieces a live feel.

To do this we’ve split the parts of the tunes between the three of us, generally Duncan takes the drum parts and plays the drums from each piece on an MPC, i take the synth and bass line parts and sometimes trigger samples on a midi keyboard and will tweaks effects and layers samples off ableton on a midi controller.  We loosely stick to the structures of the pieces on record, but try and keep it open to little improvisations and extending sections. We’ve also built in a couple of segways to keep the set flowing.

At the moment I think the set lies half way between a DJ set and a live performance. There’s a lot of knob twiddling where you can’t really see how the music’s being made. We’d like to open up the process further by creating some of the acoustic sounds and samples live with instruments and loop stations etc. We’re also looking at using the midi gear to trigger visuals simultaneously.

How do you go about sampling material for your tracks, and what implications does this bring with it?

A lot of the sounds we use are created by using live instruments and sounds we’ve recorded – synths, drums etc. We do sample in the traditional sense sometimes as well as re-sampling things we’ve made. For example in ‘Perspex Glass’ we put the stems into a program called ‘Forester’ which randomly loops and effects whatever you put it and generated an intro for the piece. I think these kind of processes give the music a live feel and a certain depth and quality.

What medium do you prefer and why?

I listen to digital most. It’s easily transportable and easy to get hold of almost anything very quickly. Free digital platforms and the ability to instantly share music across the world have opened people up to music they would not have been exposed to in the pre-digital world, hence people have far broader music tastes than they did 10 years ago.

Artistically this has meant that hybrids and creoles occur far more frequently and sounds and genres have been freed up to flow across each other in new and interesting ways. We wouldn’t be making the music we are today if it wasn’t for digital music.

I think the main disadvantage of free digital music is that as you don’t invest in it financially your less likely to give it time to potentially grow on you thus the free music culture can lead to quite shallow listening.

However, I love the sound and feel of old jazz and classical records, I think there’s something in listening to the music in the format that it was originally made for; you get more of a sense of the time and place of the particular tune.

What does the future hold for Circle Traps and for you individually?

Me and Duncan are finishing our 3rd album with Portico Quartet at the moment and Wills working on more solo material that should be out soonish. We’ve done a remix of a tune by our friend Cornelia that should be out soon, which is on the mix and we’re starting to work on some more Circle Traps tunes when there’s a bit of free time. Hopefully we’ll drop a new EP/album at some point later this year.

What are your favorite festivals? Will you be performing or attending any this year?

Glastonbury’s probably my favorite for music, Secret Garden for partying and Womad for chilling. Unfortunately we’re not at any of them this year.

Don’t go ice skating if the ring isn’t frozen yet.