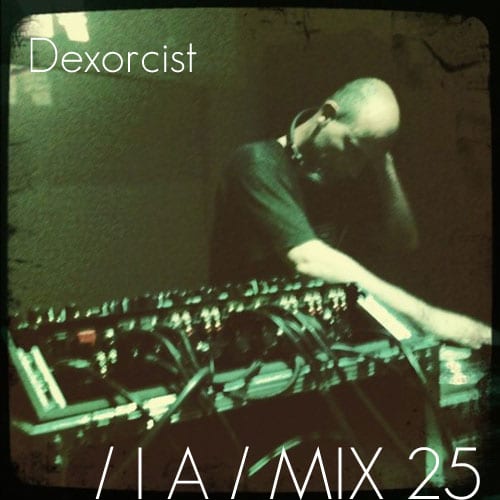 Dexorcist AKA Simon Brown has been instrumental in London’s electronic music scene for the past 12 years. He’s now making a comeback and is introducing us to a deeper more 4 x 4 inclined sound. This mix was recorded exclusively for Inverted Audio to showcase his forthcoming releases and DJ style, get to ready for a body rocking electro mix featuring Plant 43, Instra:Mental, Addison Groove, Claro Intelecto and Boddika.

Please can you introduce yourself and tell us where you’re from and what you’re currently up to?

I’m originally from a place called Shepperton in Middlesex but have been living around London for about 15 years but currently North London. I’m currently working on some deeper/ melodic material compared to the heavier more industrial stuff I have been writing with Bass Junkie.

Can you expand on your musical background, what you’ve done in the past, where you learnt your trade and what / who has been responsible for your output.

I grew up listening to jazz, funk, electro and hip-hop and then got into house and techno in the late 80’s. I then started writing Miami Bass influenced stuff in the late 90’s which I learnt to make on a Akai S900 sampler and a Yamaha DX100. I have written mainly electro bass music but have ventured into the more UK breakstep stuff from time to time. I have released under labels Battle Trax, Control Tower, Maschinen Music, Monotone and SMB.

What’s the story behind the name Dexorcist?

It was a nickname given way to me way back as I never wanted to get off the decks.

When did you get involved with electronic music, experimenting with it and where did this passion stem from?

I started playing tunes on 2 belt drives in ‘89 when my mate bought his first set of decks. The passion stemmed from my upbringing with electro in the 80’s and the numerous warehouse parties that were going on around London at the time. The main influence I guess were the RIP parties in Clink Street, London Bridge 1988.

Please can you expand on your previous involvement and relationship with WANG?

I have known Lou and Nathan for a long time as they used to come to our outdoor parties many moons ago. I then stayed in close contact with them musically as they have always pushed Electro (along with Scand and Plex) even when lots of other people fell off it when the Dubstep thing came around. Their parties seem to go from strength to strength and have a dedicated following.

WANG TRAX takes influence from acid house and London’s free party scene, sourcing the best elements from them and playing the latest sounds. How do you think WANG TRAX will be accepted in London’s electronic music scene, will people shine to the WANG concept?

Well I think in the current climate with lots of decent authentic sounding Chicago influenced House coming out and the ex-Dubstep guys like Instra:Mental, Boddika and Addison Groove playing and making Electro, its looking bright! Its quite inspiring to come back late at night and hear London pirate stations like Rinse FM playing Drexciya and Steve Poindexter.

With so many new record labels and club nights opening up these days, what would you say is the element that makes WANG TRAX that bit unique?

They are one of the few crews who are still pushing real Electro in London and that will shine through.

You’ve released a number of records with fellow cohorts such as Radioactive Man and Bass Junkie. What elements of the past have you recycled into your new productions?

I have always been massively influenced by Miami Bass and 80’s Electro. Also old school House and Techno as its got the Funk, but is dark and grimey at the same time. Again, there’s some really good new stuff coming out again now the Half Step thing has quietened down.

Having produced music for the past 12 years or so, you must have seen a significant shift in the way people create music, hardware to software. Where do you stand in relation to this?

Software is great for certain things but doesn’t have the warmth and depth of hardware. Its good to have a mixture of the two. There’s too much stuff out there at the moment that all sounds the same as its all made on the same software. It kind of lacks soul to a degree and sounds a little bit cold.

What is your preferred medium and why? Cassette / Vinyl / CD / Digital

Where have you spent the majority of your time creating and producing your music and with whom?

I have had a few studios around London but am currently working from home by myself and with Radioactive Man from time to time. I guess I will do more stuff with Bass Junkie again soon when he gets his studio working again. Sort it out Klein!

Over the years what have been the highlights of your career?

My favorite times were in 1991 when we started doing outdoor parties as The Fear Teachers. The music was still relatively fresh and people were seriously up for a party. Also all the warehouse parties we have done over the years.

What can we expect from you in the next 2 years?

I have something coming out on Rebel Intelligence and an EP coming out on Scan One’s Yellow Machines. There’s also a special Battle Trax release coming soon which has got a collaboration with some special guests…Keep ya ears peeled!

As for gigs I will be playing at the Brackout vs Plex, and a great outdoor event in Dublin run by the Warehouse Collective. It will also be the 20 year anniversary of The Fear Teachers which I’m really looking forward to.