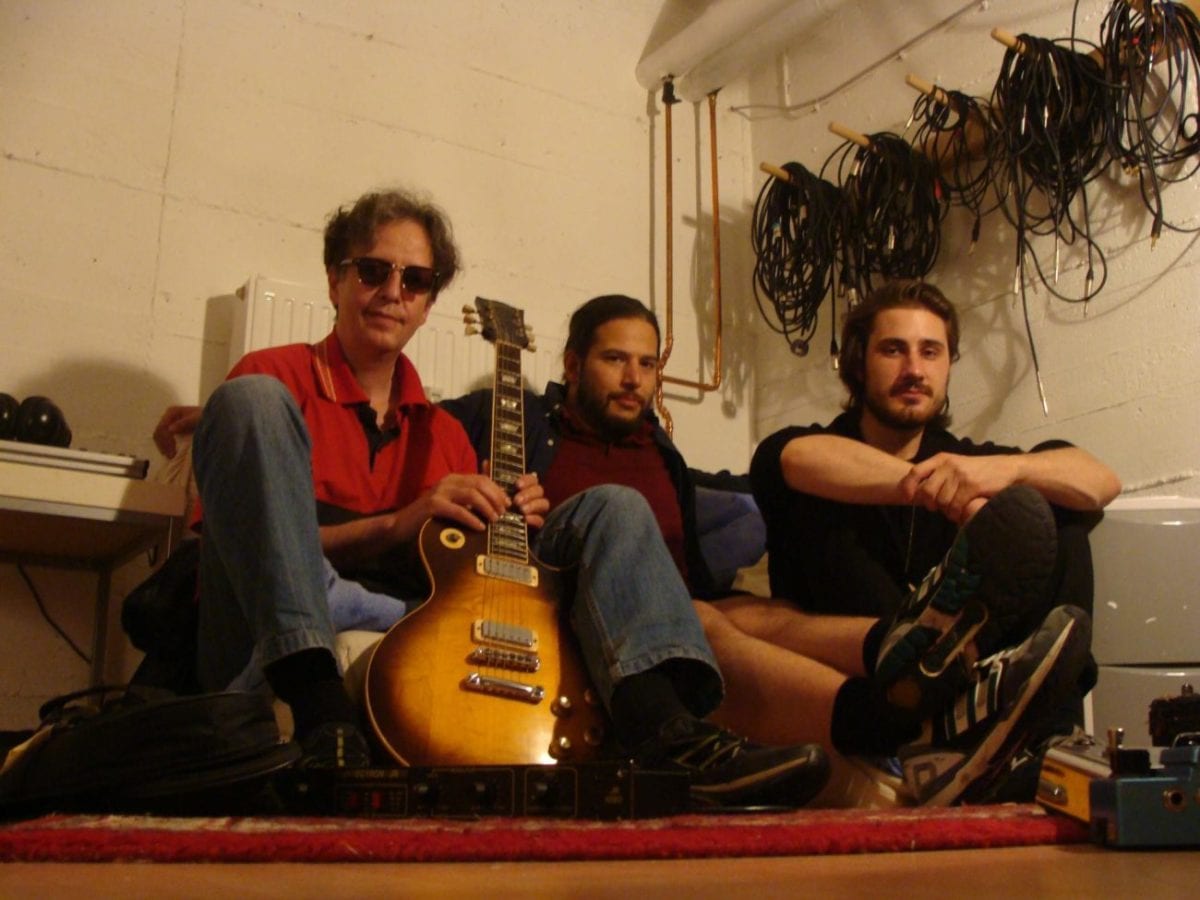 If you’re not familiar with them yet, Montezumas Rache is the pair formed by The Record Loft owner Christian Pannenborg and Salon des Amateurs mainstay Jan Schulte best known as Wolf Müller, Bufiman or Diskoking Burnhart McKoolski. Their stunning debut outing, the recently-repressed ‘Wu Du Wu‘, made quite a splash when it first came out two years ago.

The Berlin-via-Düsseldorf based duo is now back with their second instalment, a collaborative effort featuring former Dunkelziffer and Phantom guitarist Dominik Von Senger, released via Golf Channel Recordings and Emotional Response.

The soberly-titled ‘EP‘ has a lot to offer with its mind-bending elixir of eerie funk, ambientish tropes and drawn bars of mesmeric kraut grooves, definitely registering Christian and Jan in a sound realm of their own. We sat back with the triplet to find out more about their one-off studio session, MZR’s raison d’être and asked them to select some of their most influential cuts.

Christian, Jan- what triggered you to start the Montezumas Rache project?

Christian: If I can say so, the trigger was an urge for imaginative music at this time, it was out of pure demand of what we felt we wanted to hear or make available for dance floors and we didn’t see happening. Basically there is and was dance music outside of Detroit and Chicago and New York and all things deriving from those points.

Christian, I read it was you who arranged the first gathering with Dominik. When and where did you guys initially meet?

Christian: Oh, Dominik came by at a gallery opening in Düsseldorf to which both Jan and I went to. It was at MAP for the single club project, which was a temporary art party mayhem me and Jan played regularly. Actually I brought loads of rave to it like Dish & Tell and such and it worked quite well before its time. 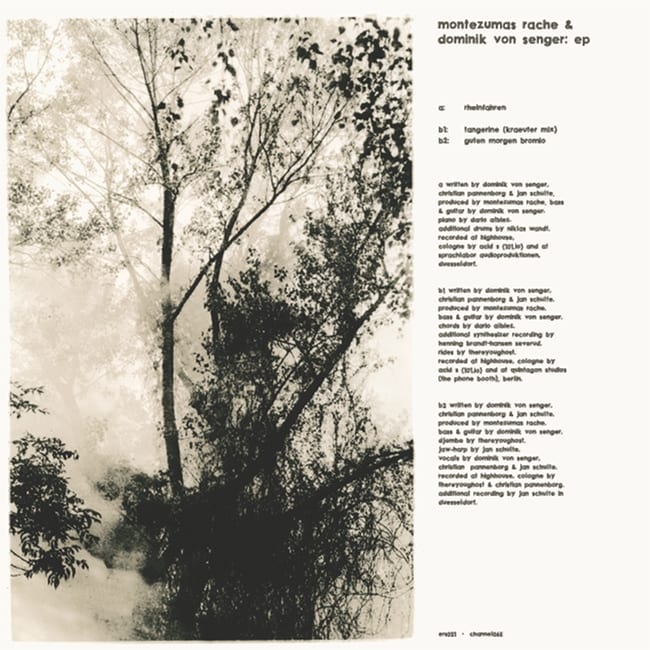 Dominik, you used to be the guitarist of staple Cologne-based Kraut bands Dunkelziffer and Phantom – amongst others.. How did you come to electronic music production?

Dominik: I never really, properly released anything under the strict ‘electronic’ label – but if you mean working with electronics, it has always been one of my main centers of interest. I did a lot of home recording with little gadgets and tape before the idea reached real musicians.

Then with the arrival of the first computers – although I did not have one myself, I started to create in all possible directions. Also, a lot of my ideas were induced because of the simple forms that computer would process and it worked well ever since. I had the first Casio VL-1 ADSR and really composed big things with it, like my track ‘No Name‘ which I played with the band later. 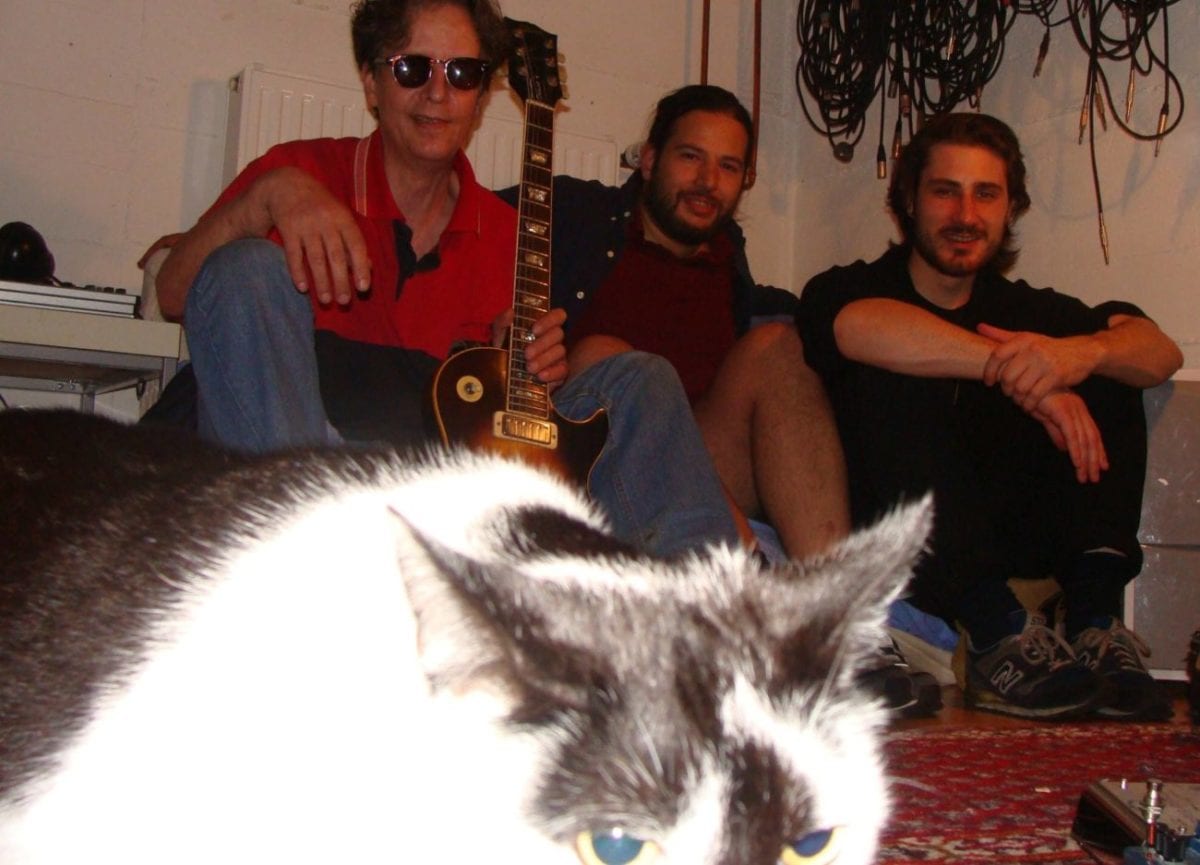 What’s been the recording process like for this EP?

Jan: We prepared a few basic rhythm grooves and then let Dominik decide which he liked or which gave him inspiration.
When Dominik arrived at the studio after he spent 2 hours in a traffic jam he was full of energy and ideas that he had while waiting in the car… and the first 10 or more guitar and bass recordings are the complete foundation to the ‘Rheinfahren‘ track.

He recorded one perfect take after the other, first the bassline, then some percussive hits, then the catchy melody and at last those wonderful wide scapes, almost all guitars in that track are first take recordings done within the first half hour in the studio. It was wonderful.

For ‘Guten Morgen Bromio‘ we recorded a distorted weird green toy drum-machine for kids that Thereyoughost had in the studio and did some live dubbing on the drums while Dominik was playing spacey guitar grooves, and later added more live percussion.

We tried to record as much stuff with Dominik and Thereyoughost as possible in these 2 studio days, to have many possibilities in the post production in my studio in Düsseldorf. Unfortunately this post production took us way too long… but in the end we are all very happy with the outcome. 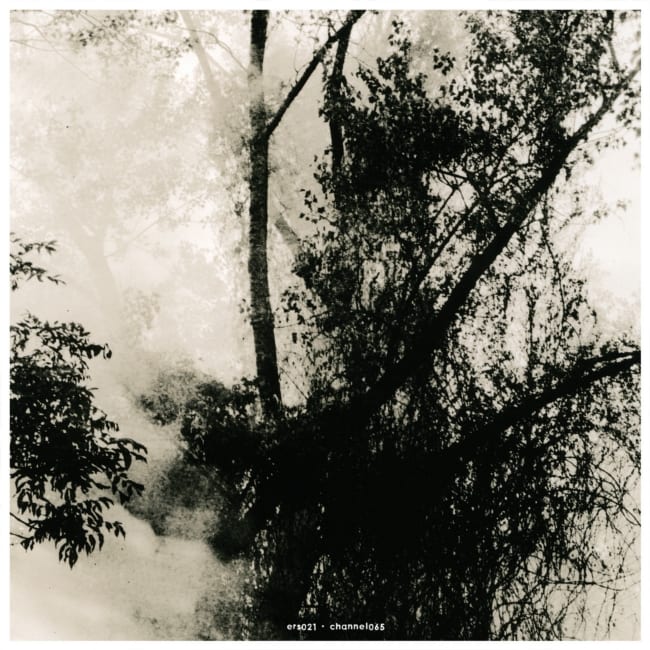 Your first effort as MZR has been released via Music From Memory’s sub-label Second Circle, this one is out on Emotional Response and Golf Channel Recordings. How were the labels involved in this reunion?

Christian: Dominik has been with Golf Channel and we were planning to release with Emotional and somehow Phil and Stuart were already into some sort of a collaboration anyways so it felt all natural. For us its a great honour to be the focus of such a project of course.

Jan: Chuggy from Emotional Response was very important as a motivational force to push us to finally finish the tracks, and since he always wanted to cooperate with Phil South from Golf Channel this was a nice option, especially because Phil and Chuggy both worked with Dominik before. 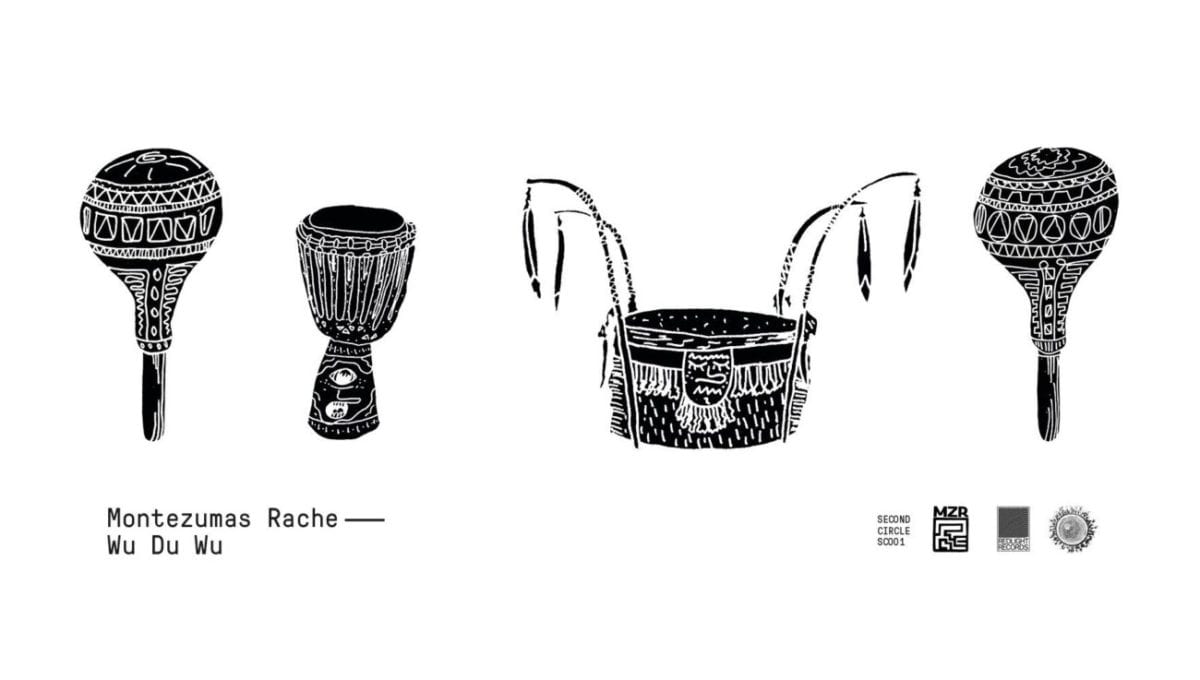 Did the big success of Wu Du Wu inflect your vision for this second outing? Did it ever weigh in on your artistic choices?
Christian: I don’t think that this project is being influenced so much by things happening outside of our little MZR world. When we meet the music is already there as a sort of vision, it’s more about impressions and emotions that we have been into for some time. It’s all based on very direct vibes and ideas that we try to live up to in the process.

Maybe it’s a selfish way of musical expression but MZR is a very personal project to both of us, in which we try to express internal phantasies about music and what needs to happen and needs to see light. I’m very impressed about the way Jodorowsky is describing his approach to movies in the ‘Dune‘ documentary. I think we try to envision our music in a similar way, of course nowhere near to his level of mastery and genius.

Jan: The recordings for the EP happened in 2012 so we were not aware of the potential success of Wu Du Wu in 2014, which was actually recorded in 2009. The musical process with Dominik was different and totally divided from the work on other stuff. 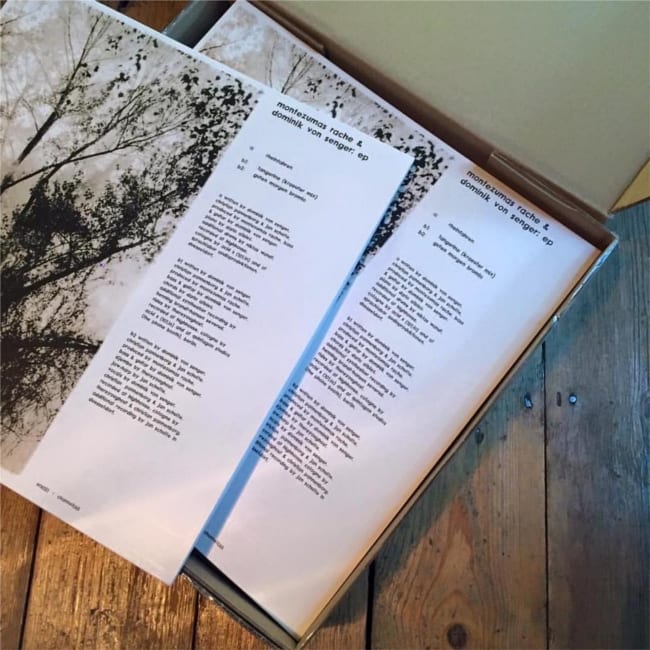 Do you guys have a delineated role in the studio? Or do you switch instruments and jam around – just following the inspiration of the moment?

Dominik: Very much open but I came up in the studio with an idea I got whilst driving there and we started with that bass line played on a Gibson guitar with sub-octivider while Christian and Jan were working on beats, electronic instruments and real drum kit.

In a way this was the first direction we took and then they finished the tracks with a different cast of musicians by themselves. It’s mainly Jan who took care of the final stage because we’ve spent much of our time together listening to a lot of music. I brought an old case of cassettes, loaded with tons of ideas which were still to be transformed. 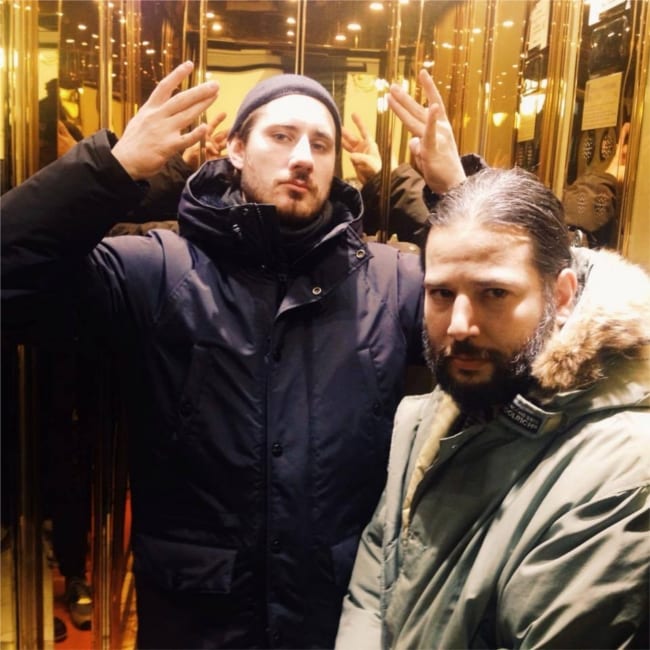 Were you listening to music during the recording sessions or do you prefer to abstract yourself completely in these moments?

Christian: I think it can only weather the process of musical vision if you are trying to get into moods by taking in other people’s work. I mean you simply can’t recreate or even imagine the emotional settings that lead to great productive moments, in a way the influx of music in such a process will stand in the way of compressing vibe and moment as your subconscious is processing what you have just bombarded it with. In the end I think that’s where copying has its roots, being a conscious or subconscious process.

Jan: We planned the recording day in Cologne weeks in advance, but then on that day everything failed… I waited 2 hours for Dominik at the meeting place as he was stuck in a massive traffic jam and did not have a mobile phone, then Christian’s carsharing opportunity bailed him and he also was almost 3 hours delayed.

It looked like the recording session would completely collapse… but then by some miracle we all arrived at the recording studio in the exact same moment, and directly started to work and record, totally free from any other distraction.

Dominik: Everyone would play records upstairs during the pauses. It was great fun to have like three vinyl enthusiasts and specialists putting on records at the same time – very interesting and exciting, but my older cassettes did work well in comparison too. I would just plug my guitar in their mixer and play with whatever comes along, hehe. 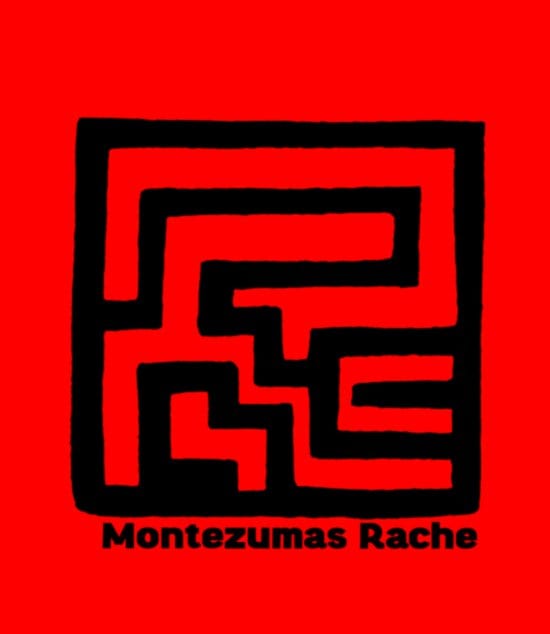 Is Montezumas Rache destined to remain a studio act exclusively or are you considering to set up a live as well?

Christian: We did one DJ set for very close friends in Romania – actually Eirwud Mudwasser, and I think it’s gonna stay like that. I’m happy to keep it on that level. It’s such a personal project that a live approach or DJ sets could only make us feel detached from the musical ideas behind it.

Jan: The concept behind Montezumas Rache is to always work on ideas and record with befriended musicians to create a very organic and lively sound, which Christian and me later finely produce for endless hours in the studio.

To convert this concept into a live show would take a lot of work and effort, and since we operate in different cities it is very unlikely to happen in the near future.

EP is out now, order a vinyl copy from Juno.

Jan: The definition of Krauts grooving in balearic heaven.

Jan: One of the best and most minimalistic Fusion-Jazz LPs that ever came out of Germany. Their style is incredibly stripped-back and defined, deep, and still catchy.

Jan: Dominik’s former band with a mystic journey through spiritual rhythm and uplifting harmonies. A huge classic in the morning hours in the Salon Des Amateurs in Düsseldorf.

Jan: Former Kraftwerk percussionist Basil Hammoudi and some other dudes from Düsseldorf with an unbelievable blast of tribal german superfunk, mixed down by Conny Plank.

Jan: ‘My Life In The Bush Of Ghosts’ is one of the best and most influential LPs ever made. Its approach to combining world music elements and ethnic samples with raw grooves is a thing we relate to a lot within our music production process.

6. Xhol Karavan – Talking To My Soul

Christian: It’s easy to fall into Xhol being from our region. Most of the interesting tracks are only available live, which tells you a bit about this anarcho kraut-jazz combo. Still unbelievable that they had this on german TV in the ’70s, no?

Christian: For Jan and me Klaus Weiss’ drumming skills have been something we deeply admired and listening to all of his work was part of the process that led to MZR. I chose Niagara for its richness and faux-ethnical approach.

Christian: You can’t say kraut-jazz-funk without mentioning pläne records from Dortmund. Unbelievable that such a prolific, almost academic label could spawn from a city that nowadays doesn’t even have a proper techno club anymore. Culture in decline sadly, but pläne is a statement for eternity (and ZANN is also from Dortmund).

Christian: Hey Disco! Well not really, but Trevor Bastow shows all the freaks what tight drumming and funky groove can make out of a little piece of melody, with a euro-twist.