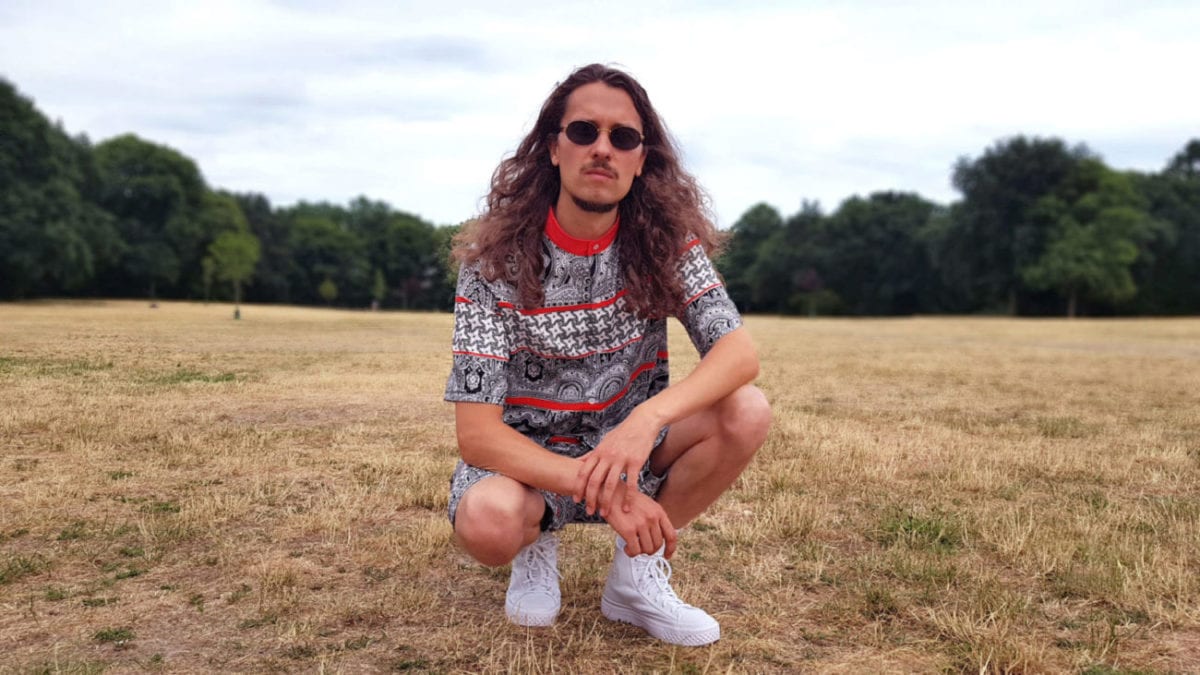 Originally known as fLako, Dario Rojo Guerra established as one the deftest abstract hip-hop producers of the early 2010’s, back when the LA beat scene was at its zenith. Since then, the Chilean born producer’s been carving and polishing a sound further deep and contemplative under the name of Natureboy Flako, which openly echoes his relationship with the organic world.

Scheduled for release next month via London-based record label Five Easy Pieces, his newest album ‘Theme For A Dream‘ is an enveloping foray into subtly arranged textural pieces – accompanied by a fitting experimental and interactive website that allows users to preview the album, whilst being engaged and absorbed by an immersive multi-sensory 4D experience.

Ahead of his live sunrise set on Friday 6th July at the Inverted Audio curated stage “Campfire Headphase” at Farr Festival 2018, we caught up with Dario in the sun-bleached expanse of Hasenheide Park in Berlin to find out more about the making of his forthcoming album, modus operandi, artwork and visuals, studio setup as well as the intuitive power of his music. 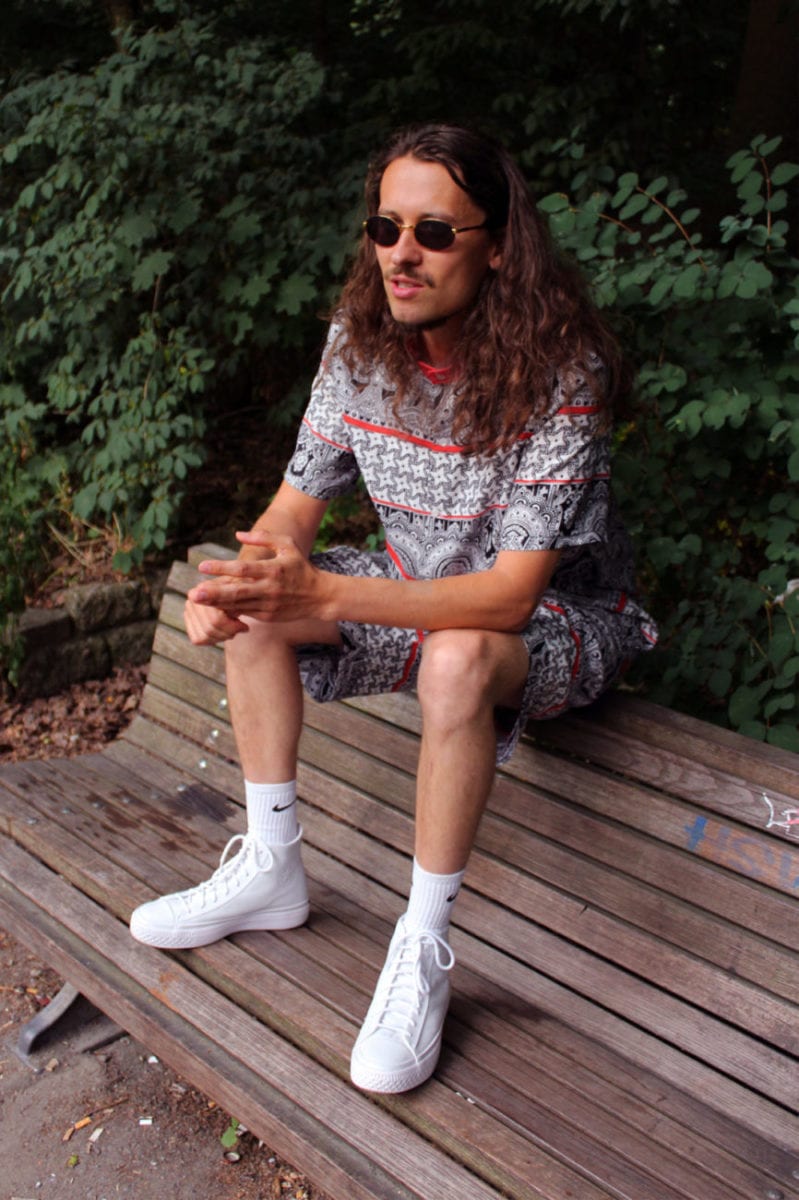 We last spoke 5 years ago when you recorded a very special mix for us under your Flako alias – it has truly become one of our favourite mixes of the series, I’d actually go as far and say it is timeless. Can you tell us why you changed from recording as “Flako” to “Natureboy Flako”?

Thank you. I’m glad to hear my music selection still resonates. I don’t feel I have changed my name, but have only amended it with something I was carrying with me for some years already.

You have a new album ‘Theme For A Dream’ coming up in July on Five Easy Pieces – please tell us about the makings of the album, where/when it was written and what your concept behind the album is?

My music originates from intuition mostly and I kept coming back to the realisation that pretty much everything and everyone is connected somehow and that balance is the key. In the attempt to understand musical balance, I discovered that there is not any sound which is harmonious or inharmonious in itself, but that it is the relation of one sound with another sound that creates harmony.

Dreams are composed in a similar way, often being created by the relation of one experience with another experience mixed with the relation of an emotion to another emotion. The way I compose music is very similar too. So apart from being another materialised moment in time, this album is the result of a self-observational process and is offering a theme for your imagination and dreams.

What spurred your desire to explore dreams, the subconscious, musical energies and healing capabilities? It sounds like you’ve been in contact with a shaman.

I enjoy listening to a lot of early ambient and experimental electronic music and I have gotten into more reflective compositions using a mix of synthesisers and acoustic instruments myself. I also started exploring alternative musical notation methods and experimenting with synthesisers and reel-to-reel tape recordings. While composing and recording I often end up in a meditative-like state and might have actually learned how to be in contact with myself a little more through that.

What’s the story behind the Dali-esque album artwork? Who illustrated it and what does it represent to you?

I wanted the artwork to show the mind space, that I often find myself in, when I create music. It’s somewhere between now and then and here and there, but always between somehow. A pretty surreal place. I was able to collaborate with the amazingly talented illustrator Raffaele Paolucci. He understood my vision and it was a really nice process of exchanging ideas and developing this great illustration. 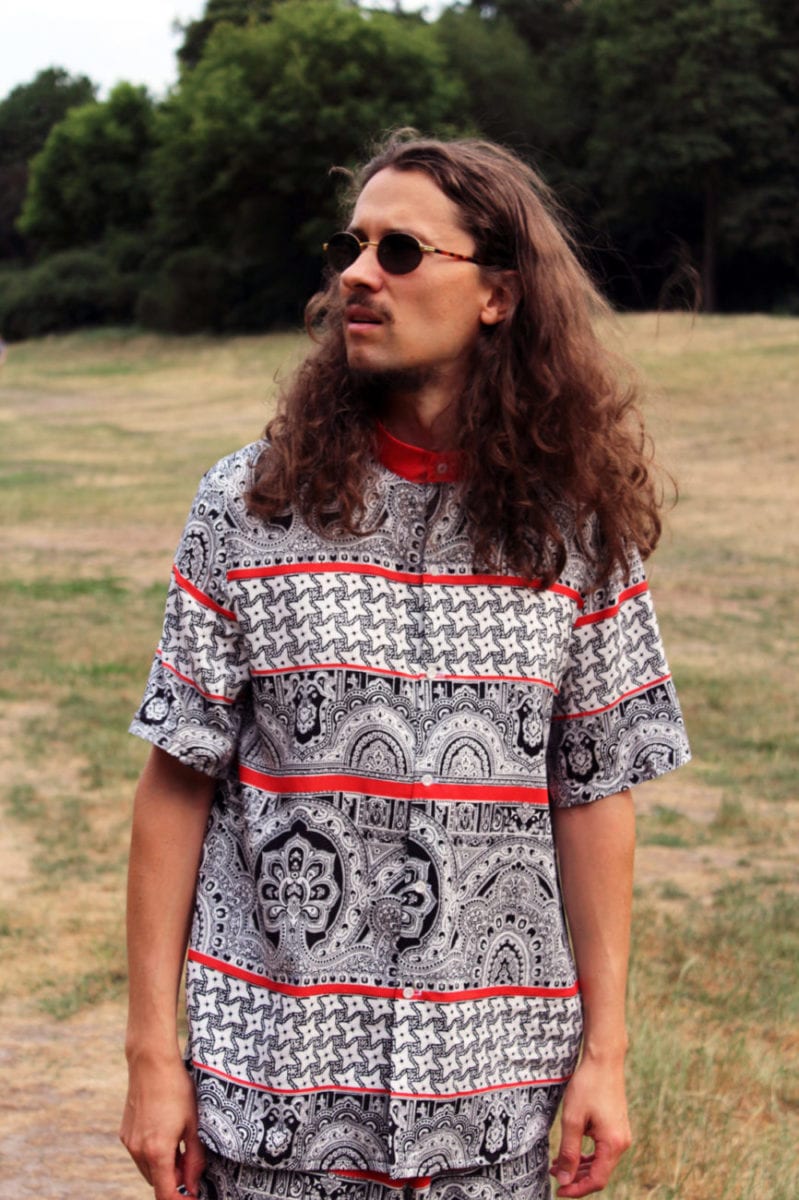 “Theme For A Dream” will also be accompanied by an experimental and interactive website that allows users to preview the album, whilst being an immersive, unique multi-sensory 4D experience. Who have you been working with in order to make this a reality, how much input have you had on the flow of the experience and can you describe the experience?

This experiment was created in collaboration with 30000fps, New Now and UNDEV. In simple terms, a specially designed viewer allows for short segments of dreams to be recorded as two-dimensional moving images. With the device connected and upon entering the space within the viewer, your hands become the instrument with which you can begin to pull at and distort your own perception. With practice, you soon discover how to move forward through time and space. As you progress, you learn that by merely touching the image stream, the device allows the experimenter to observe and study a three dimensional form as it emerged in real-time.

The source of the images, the subject providing input to the device, eyes flickering throughout the experiment, continues to produce new image streams for the researcher to process. Upon further viewings, occasionally a recognisable object or pattern emerges and it’s significance can be investigated. By repeating the cycle sequence many times over, a certain logic can be ascertained. The pieces viewed as an assembled whole begin to tell a story, giving shape to an unfamiliar world and providing a window onto the personal characteristics and emotional functioning of the subject. Explore theme-for-a-dream.com

I’m keen to learn what spurred you to heighten the experience of the album listening experience? I guess it’s not everyday you release an album!

And so, it was said, they created a catalogue of moments which we call the continuity of time. Between magic and knowledge, cruelty and pleasure, they newly compose and shape space, colour and sound into materialised moments. Past, present and future becomes one and provides the theatre for different moments of constant freedom and restraint, motion and standstill, sound and silence. Music Heals!

Can you give us a break down on how you go out creating a new track. Do you start with the beat, vocals, synths – what stops you from clicking delete?

Curiosity is what drives the process and not one method is applied. Intuition and experiments are mostly the first starting points and I prefer to reset every time and start from scratch. Deleting and listening are very important parts in the process of creating music.

You’ve also been working on some remixes lately -Your remix for Laraaji is really great, how did you go about remixing the original track – did you have any direct contact with Edward and what was the feedback process like?

I had no stems or even tracks available, so I was limited to working with the master file. I listened to the original tune and started to edit the parts that I enjoyed the most. I slightly rearranged it and started to record everything that I felt was missing or could work nicely in addition.

I recorded a metal guiro, congas, my own kalimba and synthesizers. Unfortunately I didn’t get in touch with Larraaji himself in the process, but it was a great pleasure and joy to work on this. Shouts to Carlos Niño for asking me to contribute. 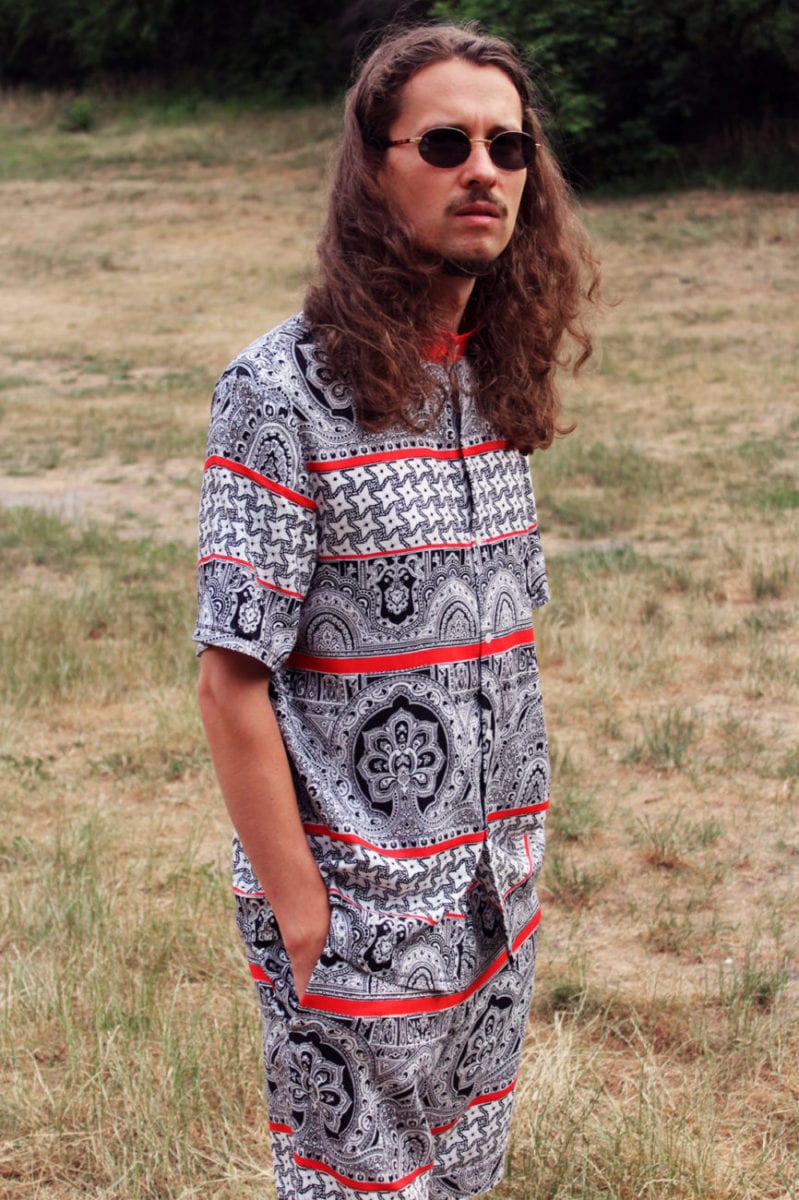 How did you develop your studio setup for writing the new album? Did you acquire any new instruments or configure previous setups?

My studio is an always changing little biotope and humble assembly of acoustic and electronic devices that allow me to express things that I don’t know how to express otherwise. I have acquired a few humble synthesisers and effect devices recently that I’m still exploring.

The latest addition though is a reel-to-reel tape machine that has already done great and unexpected things for me. I originally wanted to explore the abilities of manipulating the tape in different ways, but ended up simply recording / archiving digital recordings to tape.

The process of materialising these recordings, helped me  realise how many recordings I have laying around, that normally just get lost and forgotten. I now have this one tape full of archived recordings, that I think would already make a decent electronic / ambient album as it is.

What non-musical pursuits and hobbies have you taken up lately when you’re not making music?

I recently took an course in “Natural History Illustration” in an attempt to learn how to draw accurate representations of nature (Linnaean style). Observing was and remains the most important part in this learning process also.

We’re super excited about your sunrise set at the Inverted Audio curated stage “Campfire Headphase” at Farr Festival 2018 – you’re set to play at 5-6am on Saturday morning. How are you feeling about your set and what equipment will you be bringing with you for the live set?

I will do what I always do. I try to create a dynamic and balanced journey through my musical world and hopefully transmit and leave something positive.

1. From The Shadows
2. Stream Of Being
3. Theme For A Dream
4. Nebulous Garden
5. The Great Escape
6. Traummaschine
7. Ancient Lands
8. Wolkenlos 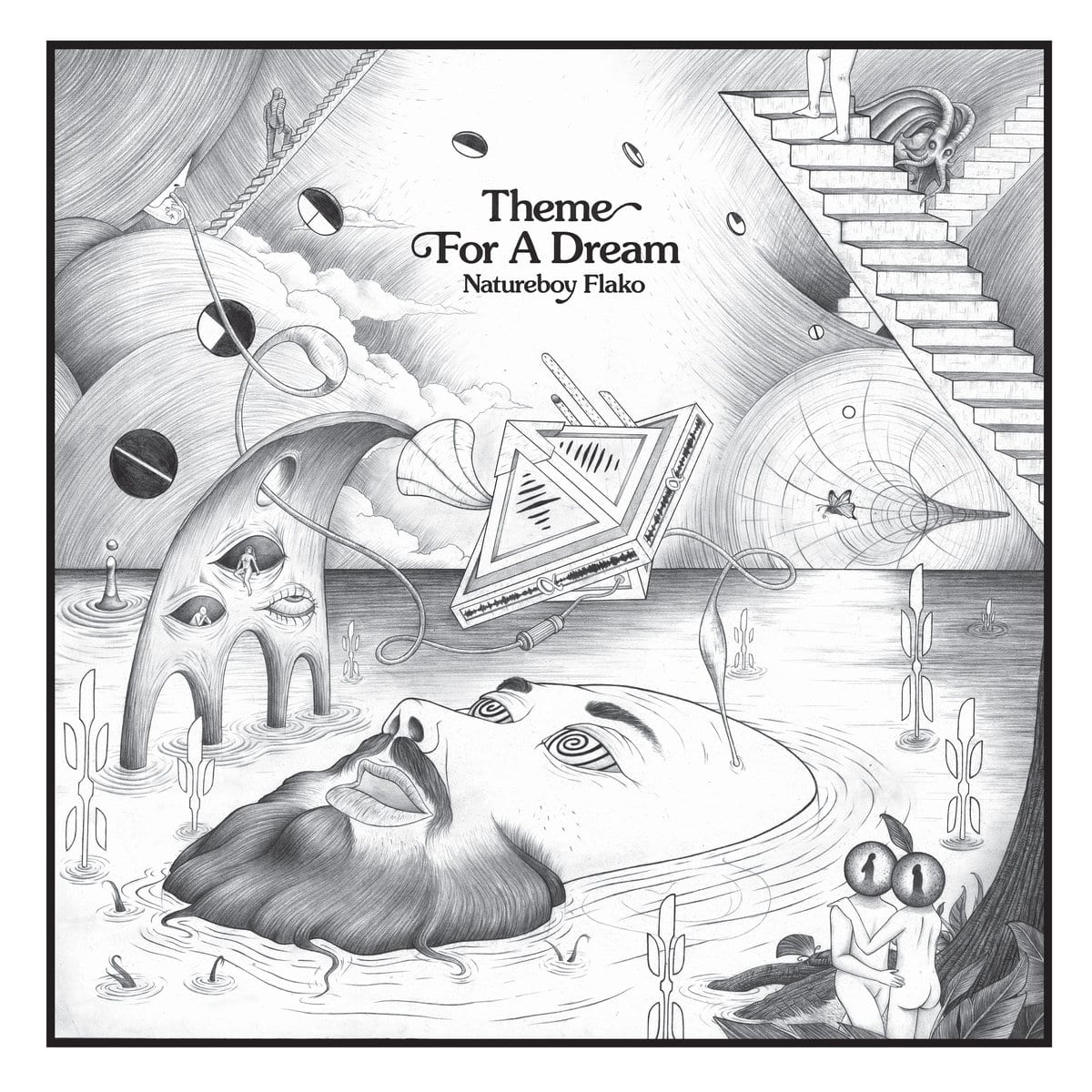