We met up with Racine in London to find about the intricacies of his polychromatic debut album released last month on Aisha Devi‘s imprint Danse Noire. Ahead of his performance in Dalston, the Canadian producer delved deep into his psyche, revealing the space from which ‘Quelque Chose Tombe‘ was born and discusses the importance of creating a unique sonic identity. 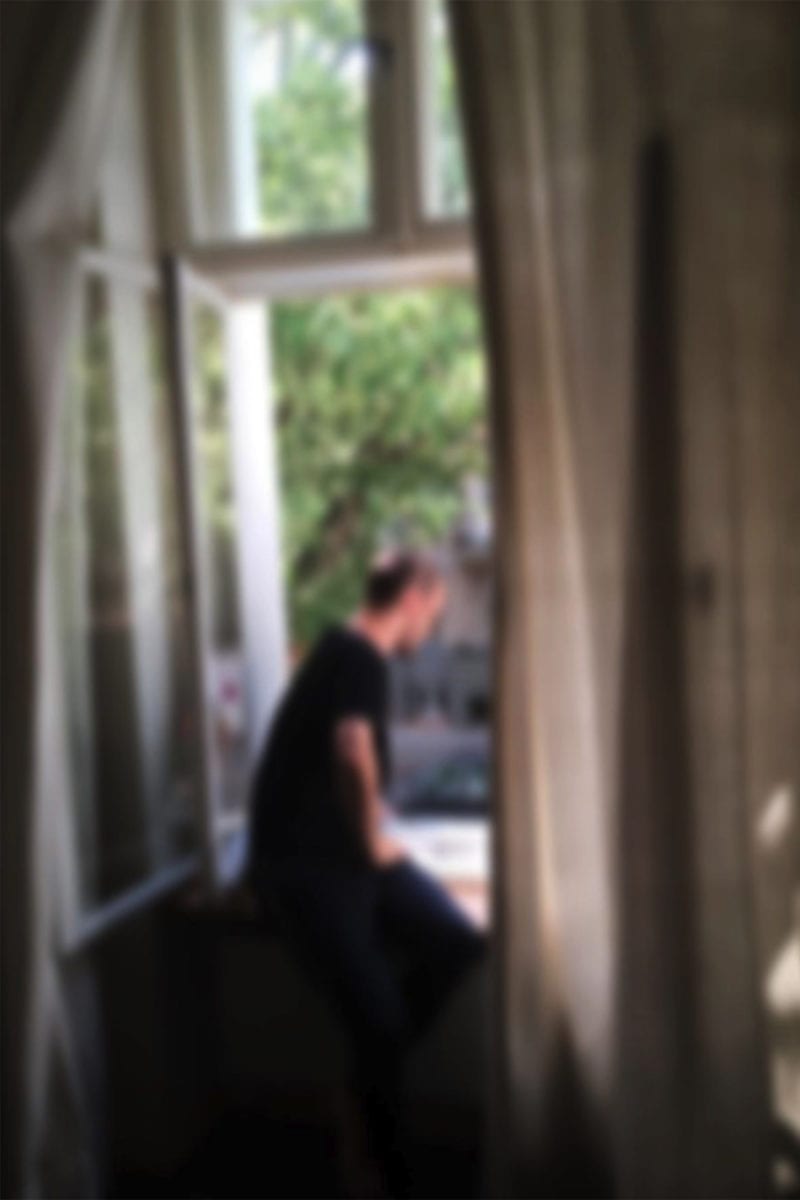 You’re currently on tour in Europe. Can you talk us through your planned journey, the places which you’ll be playing, and who has been involved with creating this experience?

I’ve been in London since Friday. Cafe OTO is kinda legendary in Montreal so it’s been great to have a chance to visit. I’m going to Berlin next play at OHM. I’ll be playing with some great artists including PAN boss Bill Kouligas, Dis Fig, Raime and Tash LC. It will be crazy, I can’t wait.

Max-Louis [tonight’s promoter] came over to Montreal to organise a show and booked me. I told him that I was planning an EU tour and that I wanted to come to London, and he told me he’d organise at least two gigs for me, and I said, “sure!”

Danse Noire organised the night at OHM and Genot Centre helped me find the last two gigs in the Czech Republic, in Brno and Ostrava. I played one gig in Brno two years ago and it was amazing.

Can you talk us through your musical heritage and give us a description of what you’re trying to do on your album, in particular through your methods of music creation?

I started making music a long time ago. Trying to find my own voice was the main thing and still is. I think a good artist is one who doesn’t compromise and expresses themselves in the realist manner as possible. For me, I need to find the best way to express myself with a true voice.

Then came my interest in the use of samples. All of my music is focussed on this… and how you can use it. I come from a hip-hop background and made some beats when I was a teenager. There’s something quite romantic about this method, and it’s interesting find depth in a little sample. It could be 15 seconds, or half a second, I love to zoom into these spaces.

The thing I love about this is that it’s a way for me to show what I’m hearing in something… for people to hear the way I hear a sample. I highlight small snippets, a frequency for instance that inspires me for some reason. All of my inspiration comes with from sampling, it’s just processing it to make it my own.

I don’t see it as stealing; it’s more of a decontextualisation. To put it somewhere else, to see how it can live by itself. I’m really into this idea. All my music turns around this theme, this research, and I had the incredible opportunity to release music on Danse Noire. It’s flattering that the label offered me this opportunity. I’ve only met the people behind Danse Noir once, but they already feel like family.

How did the album come to be released on Danse Noire? Did you have preconceptions that you wished the label to release the music, or did you approach many others?

I sent my demos to a few labels. In an ideal world I would only send them to the label I wanted, but from experience it might get lost.

However, Danse Noire listened carefully and replied saying “oh, this is interesting”, and then we started to chat. I then felt that this was the label that I wanted to release on. They’re comprehensive and are in this industry for the right reason. They are also very selective and their work ethic is quite amazing.

I wanted to go back on a point you made when talking about your sample-led production method. You were saying you like to try and highlight the way you hear the sample, which implies you think listening is a subjective experience. Is that something you try and do as part of the post-procedure, to highlight the aspects of a sample which leap out at you, differently to others?

I don’t want to get into the details as it’s not interesting, but one method I use is to isolate frequencies form the samples I use. I’m working a lot with a CDJ right now, creating micro loops and working with repetition.

I’ll build up a really quick sample, maybe it won’t get to the final result but just be a point of inspiration. I’ll hear something inside of it, which could be very psychoacoustic; meaning it’s not really there. I might hear a ghost note that attracts itself to me at that particular moment. I’ll then try to expand on that idea.

It’s a pretty natural way to work and it’s not super labour intensive. I feel that if I do get into this labour-intensive workflow it won’t be as interesting… sometimes you make a mistake, and it’s just like, this is it, this is a song, this is what I need to work on. 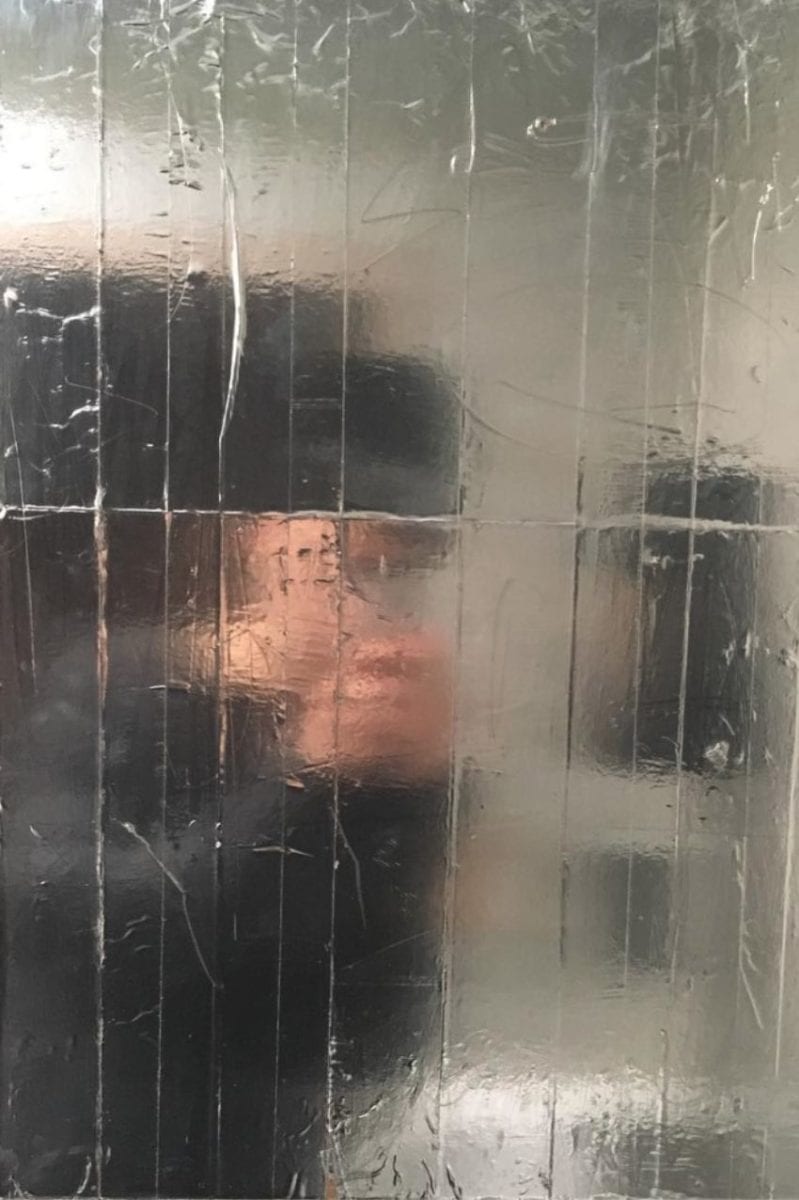 The album was drafted up quickly, I returned to it from time to time, finding hidden sounds inside frequencies and highlighting them, and finding other things to build upon.

I’m fortunate to have some great collaborators in my life, including an artist from Montreal called Keru Not Ever. We did this project called Corporation that we released on Genot Centre. I’m fortunate to have him in my life as I send him a lot of drafts and he sends me back ideas, it’s an exchange of sounds.

Right now I’m working song-by-song, but I want to do something more conceptual. It’s like being in a labyrinth; you have your computer open with infinite possibilities, but loose the magic over time, song after song. I wish I could find something that I can really focus on.

It seems to me that the album is a network of songs that were created over a particular period of time that are not bounded by a concept, is there anything else which holds them together?

Yeah, actually there was a certain, precise period where I had experiences, then afterwards I had a period where I could try to translate that into sounds. I had to leave my job working at a restaurant. The chef was a bully. It was problematic working there as I’m quite an anxious person. Fortunately it really inspires me, this kind of précariat, where you have to work to have money to continue working on other things, and I think that’s quite ironic and absurd, that I had to work at this place that was toxic.

I think my album was influenced by this experience. After a long shift where he screamed at us all night, I had to leave. I came back the next day and said I was done, no notice, I’m not coming back here ever again. I continued working on my album and I’d say it’s a flashback to this anxious period.

I’m not so keen on “organic” music, I find it quite predictable. Still, for this album I tried to keep it as organic as possible as a way of trying to break this stressful moment and have something that really flows together nicely.

What sticks it together is a lot of precise, small elements that were added after the album was done, a couple of layers here. They are all really subtle, though, as generally I don’t want to add, I prefer to remove, to reach the essence of the project.

When you describe ‘organic’ music, it seems that you could mean several things: music composed on older, perhaps “traditional” instruments such as the guitar or piano, or music which seeks to attain a certain nature or characteristic of ‘organic-ness’, or naturality. Which do you refer to?

Not traditional instruments… there are a lot of people who, I think, love when electronic music is as organic as possible, like it isn’t okay that it’s made by computers. So, if it’s not “organic” enough it’s too uncanny, too robotic or synthesised. By no means do I want to say that I do not like this music, quite the opposite I really love when it’s super surgical and synthetic, and I think when it’s too ‘organic’ music often can lose the essence and become a gimmick. It’s like trying to hide something.

I try not to go through this path, even if i think I’ve added a lot of things that have a lot more human movement. It’s a bit of give and take, and I often find myself in the middle. There are a lot of good artists that make great electronic music that is synthetic, for example EVOL is super synthetic and I think what they do is interesting but on the other hand you have something organic. I feel like I am in-between the organic and synthetic realms.

Is there anything you want to say about the album that people might not know to ask you about?

My family are from Ontario and I was born in Quebec to a Francophone family, my language is really important to me and has a big influence on my music. I tried to do make something as personal to me as possible with this album. The first time I chose to use my name I don’t think I was aware of this, but now thinking back it was important.

It’s important to me to show my roots, to highlight my accent. It’s who I am, I cannot pretend to be someone else. That being said, this album is the most personal thing I have ever done and I’m super excited about sharing it.

‘Quelque Chose Tombe’ is out now on Danse Noire. Order a copy on Bandcamp.