Parhelia are the result of sunlight passing through hexagonal ice crystals contained within cirrus cloud; this natural phenomenon could hardly be more appropriate as the title for Sky H1 & Mika Oki’s A/V installation.

‘Parhélion’ is right to earn the praise showered on it: a column of fabric drenched in light encompassing the two artists is showered in projections and clouds form and break before iridescent suns right in front of your eyes, an eye-popping product of practised control of lasers across synthetic smoke. But the show is a piece of two parts, and the uplifting and emotionally transcendent music of Sky H1’s album ‘Azure‘, released in 2021 via AD 93, completes it to perfection.

The duo will perform ‘Parhélion’ inside the National Gallery of Prague’s subterranean amphitheatre on Friday 30th September, as part of a consecutive assault of audio-visual acts par excellence, featuring local acts rlung & Tasya, Ancestral Vision with h5io6i54k & realitycongress, plus TSVI & Seven Orbits’ as Paraadiso. As the moment fast approaches, we caught up with Sky H1 and Mika Oki to discuss the project, highlights from the season of touring, and what’s next for the collaborative duo. 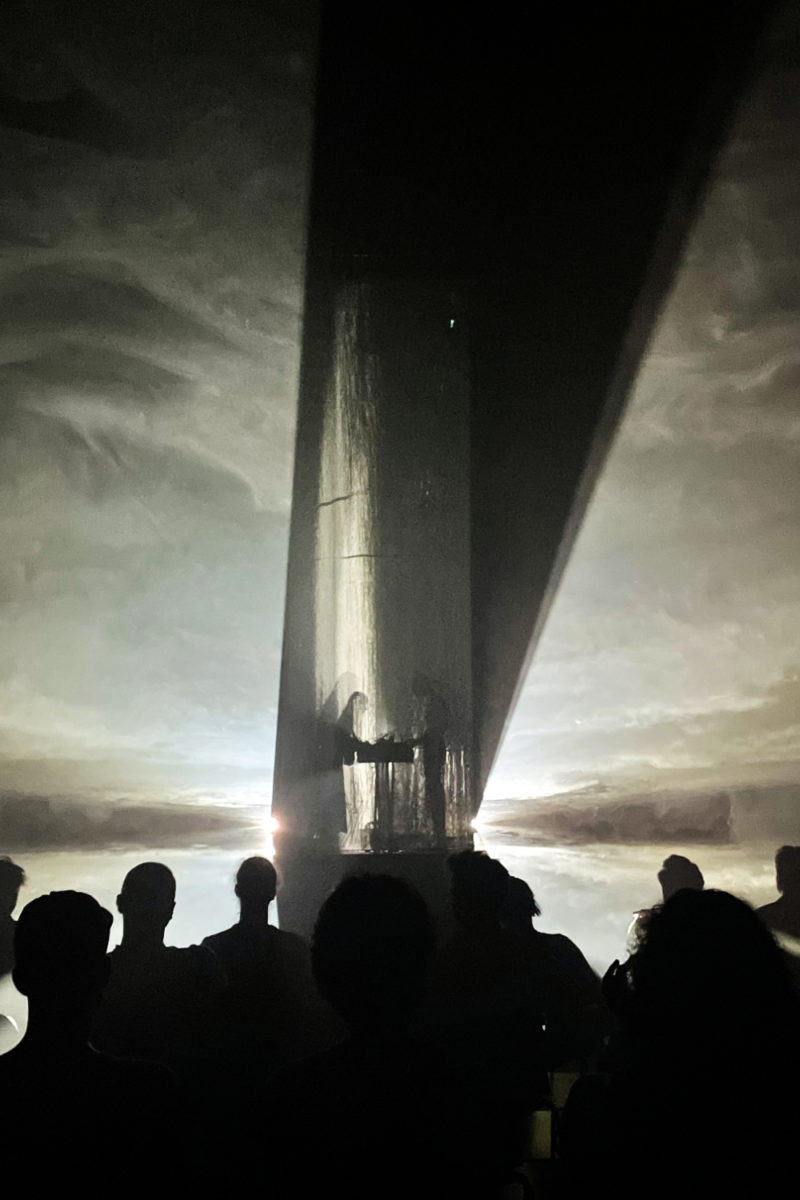 I feel fortunate to have witnessed the show already this year at MENT in Ljubljana, and having seen it, I’m ready for another round! I’d like to start by asking how the collaboration came about — you’re both based in Brussels, but surely it takes more than being in the same city to develop a show of this calibre.

Sky H1: Both Mika and I are part of the same booking agency and we saw each other quite often at events in Brussels. I had seen some of her installations that she made, which I thought were really great. When my album was finished I was thinking how I wanted to bring it to life, and since I really liked her work, I got in touch with her to see if she wanted to collaborate.

At that point she said she was working on an installation called ‘Parhélion‘, which could be used in some way for the live show. She came up with the idea to make this cone structure for projections, so it would look better on stage.

Sky H1 – your ‘Azure’ album came a bit out of the blue (pardon the pun) on AD 93, after several years of little output. How much of this time were you dedicating to the album?

Sky H1: During that time I was touring quite intensively and it took me a moment to figure out how to combine this with producing at the same time. I was also dealing with some family issues that forced me to take a break from music for about a year and a half. So when I look back on it, it was really on and off. There’s some music on the record that dates back to 2017 and some that was made really recently.

How did it come to land on AD93? Were you in contact already with the label after previous releases, or did you send it as a completed package to labels?

Sky H1: Nic Tasker had been asking in the past already about new music, and for some reason he contacted me on the exact date that the record got mixed. For me that was enough of a sign to release it with him. I also really like what he releases on the label, so I thought it was a good match.

I’ve asked already about how the collaboration came around, but can you both describe your early steps to identify how the music and the visual show would mesh together?

Sky H1: I started out by sending Mika a track list, she built some images around those songs. Since then the music keeps evolving, and so is the visual aspect. We both are trying to constantly adapt to keep it interesting for ourselves.

You’ve both been on the SHAPE platform roster, Sky H1 in 2017 and Mika in 2018. Did the platform help you shape your artistic practice, in a way that can be felt in this project?

Sky H1: It definitely gave me the opportunity to play at some amazing festivals when I only just released music, it also allowed me to progress very quickly into how to bring my music live.

Mika Oki: For me, SHAPE has been the starting point for many encounters and collaboration thanks to the platform. It really is an incredible network of artists & festivals such as SONICA, Maintenant, Terraforma and that’s how I met the Nyege Nyege fam in 2018. Can’t thank Ulf Langhenreich & CYNETART enough for giving me this opportunity.

With this kind of performance, with an “audio” artist and a “visual” one, it is often portrayed in media as a “one person, one job” situation. How much is this true? How much did you feed into each other’s ‘final’ product with the show?

Sky H1: The visual installation comes from work that Mika started years ago, so it was very important for us that we were both on stage (unlike what you usually see with people doing visuals for musicians). The music is my part and she brought in her work and we both adjusted our own pieces to make something that worked as a collaboration.

Mika Oki: The album of SKY H1 alternates between stormy landscapes and moments of calm. Whilst listening to ‘Azure‘, I have the image of a mental receptacle letting itself drift, always in search of a horizon of absolute quietude.

I’d like to ask Mika more about any inspirations for the visual side of the show: from my memories of MENT, you managed to hit that sweet spot of club atmospheric smoke and lasers, very capably painting physical imagery using little more than a fog machine and some lights. Was this the first project of its kind you attempted?

Mika Oki: The party setting has always directly influenced my artwork. I am inspired by lasers, dark distorted vision and my psychoactive experiences. The phenomenon of parhelion is an optical effect due to the reflection of the light on the crystals of ice sometimes present in the clouds. It manifests itself by iridescent luminous spots and an impression of the sun’s de-multiplication. My installation is inspired by this illusion and tends to recreate the sensation of a “trip” above a sea of clouds.

Alternating between twilight landscapes and colder and segmented spaces, ‘Parhélion‘ comes to trigger the unconscious of each one and to generate a loss of reference marks as when one is psycho-activated, or the impression of vertigo when one passes by air holes in plane as states SKY H1 in its title ‘Freefall‘. 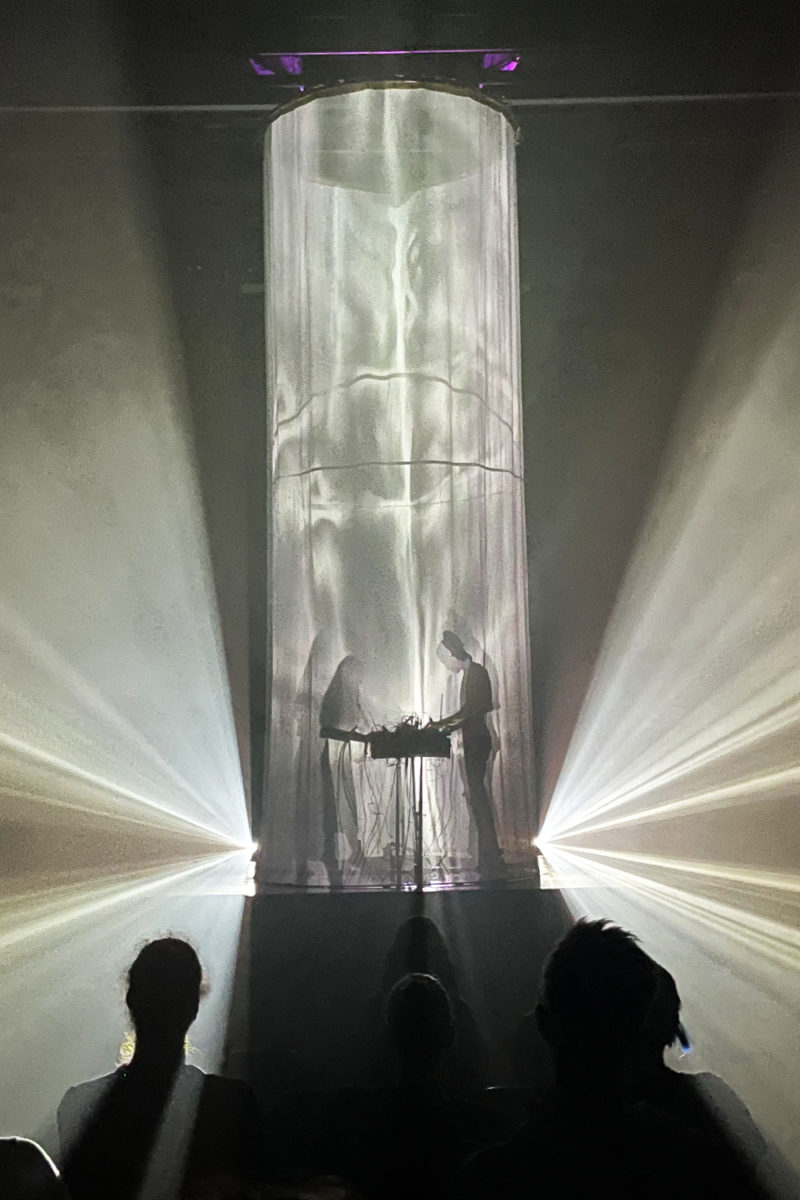 And, how accurate was that last description of the set up? It felt, from the audience, to be a relatively minimal set up to generate the cloud atmospheres of “Párhelion”, but these things are often deceptive.

Mika Oki: Beyond the kinaesthetic experience that inspires my installations, I also play with mental projections and unconscious images, leaving room for the imagination of each person to escape from the festive frame or the turbulence of daily life for a moment.

You’ve both been touring with the project quite extensively — what have been the highlights from the summer? Has it been hard to transport the show from gig to gig, and fit it into different spaces?

Sky H1: The highlight for me must have been the performance we did at Nextones. The epic scenery in the mountains north of Turin definitely contributed to that. It was also the first time we brought the installation outside and it really made it look very differently, but in a good way. So much so, that we were thinking we only wanted to do it outside!

Another highlight was the performance at MENT Festival, Ljubljana, because for a show that was inside, everything went really well and it looked very good that night. That being said, not every performance has been like that, and we sometimes had to adapt to circumstances that weren’t that great, but at least that has made some funny memories.

Lastly, do you have plans for the future of the collaboration? Will this be the last chance, or one of the last chances, to catch the performance before it is “retired”?

Sky H1: We still have quite a few shows coming up in the next few months :)

Mika Oki: I thought things would cool down after the summer but it looks like the project is spreading beyond Europe, so we will be in Mutek Mexico in November and in the US before that!

Have either of you got anything else exciting on the horizon, besides this project?

Mika Oki: Just came back from Nyege Nyege in Uganda. I played during the festival and worked on a new light installation. The aim was to attract all the flying insects and use them as a cloud of light.

This week I’ll be doing the music for a theatre piece called Les Lianes at Senghor in Brussels. I’m also working on a sound piece with the artist & poet Francisca Khamis Giacoman for an exhibition in October, in London.