While the phrase “scorched earth” is one typically reserved for military tactics and history books, Emmanuel De La Paix transposes that meaning admirably toward listening to music with ‘Terre Brûlèe‘, his second album for the Munich-based label Broque.

De La Paix’s foreground in rock bands and guitar music is felt in some tracks on the album far more dominantly than others, but a listening ear will find that thread running through the entire piece. Similarly, while the album contains moments of sweetness and ambient drift, the album’s darker edges pervade the release, inundating each reverb-soaked sweep with a note of concern.

This marries perfectly with the combination of the album’s title and its emotive artwork, a standalone piece by Swiss artist Matthew Gottardi that summons images of rust and decay beyond the edge of civilisation; by such a trifecta the album’s self-world is made whole, one imagined by another to escape to in listening.

Alongside this interview with the artist, we are presenting the track ‘Earth Pulse‘ as a premiere. As a standalone track it appears to represent the album’s influences stated above as succinctly as possible, drifting through Kranky-esque post-rock guitar melodies blasted into melancholia, embellished with scattered drums for a truly scorched palette. 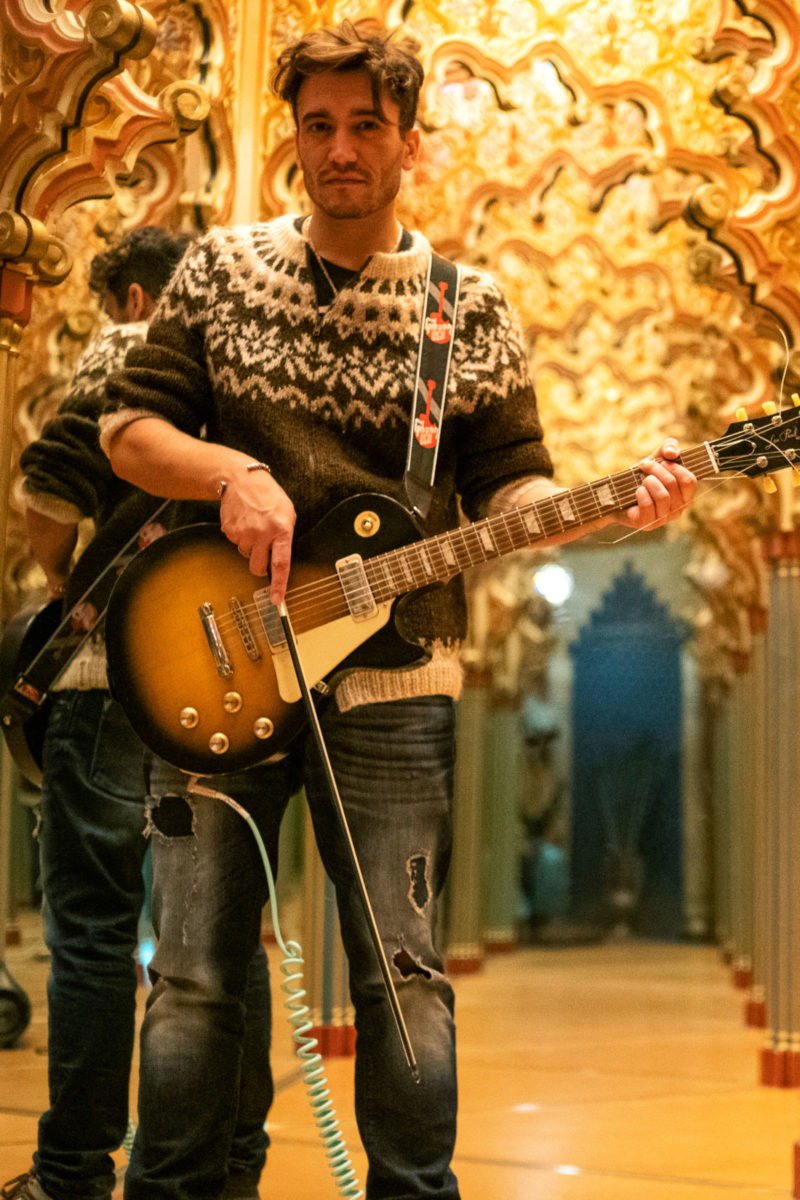 Hi Emmanuel – firstly, thanks for answering our questions, and congratulations on the album. It’s a far more expansive project than Rescue Pack’, your 4-track debut from 2021, but it also feels like music from a more mature artist. I’d like to start by asking about your musical journey leading to the release of ‘Rescue Pack’, as you’re clearly no beginner there.

Thank you Freddie. I’ve played in different bands, which were more rock oriented but I have always had a strong desire for experimental music. However, it was always a compromising deal. I was never satisfied with looking for certain dynamics such as “writing a single that fits the current top charts”.

I started to be more aware of that when I was writing music for short movies. There, you have a mandate, but you recognise the clear scope: to serve the video’s message within a sound. That’s why I love doing that. Then I said…let’s have my music project with no compromise. My purpose in music is to have fun and express what I want to say in the way that I want.

What did releasing the EP teach you about your artistic practice?

First, people are a lot more open to experimental music than I thought. It seems the more experimental, the better. Secondly, physical music, such as the CD format, is unfortunately dead.

Can you describe how you applied these learnings to the music we can hear on Terre Brûlée?

I try to use the sounds that I like. If they are not experimental or weird as in my first EP. To be daring is better than regret. The driving force is to be consistent with myself and perform the music in the way I want – regardless of trends or expectations.

Can you talk to us about some of your personal highlights on the album?

When writing music, I tend to go outdoors over the weekends and do activities. During the week I re-elaborate my experience and feelings. Often when I do outdoor activities I try to forget that I am in Switzerland and I try to imagine which landscape could belong to the places I visit. It could be Canada, Norway or Italy.

Personally, there is nothing more inspiring than travelling. Our feelings change with the landscape. Whatever you have in your heart, as soon as you step out the door, will change as a result of the landscape.

Our feelings are like clouds. It’s nice to think that your feelings will travel within the clouds. As I am bad at titles, I gave each song a different name. For example ‘Moonburn‘ was related to Norway.

We’re premiering the track ‘Earth Pulse’ – is there some story from this piece you can talk to us about?

‘Earth Pulse‘ was the first song I wrote for the album. I could have continued to do this kind of ambience for hours and hours and structuring the entire album with this sound was a big temptation. I had to stop because I wanted to experiment with other things. It was also a relief for my neighbours as the bass was so strong that it vibrated the entire building and neighbours started wondering if it was me or the railway.

Your new album feels predominantly cast into the kind of music we enjoyed early on in the Kranky discography — enigmatic synth music blended with guitars and other more “traditional” instruments. I’d like to understand what place this album came from, personally?

I am a singer first and a guitarist second. I have evolved over the years but the music I create is not necessarily the music that I listen to at home but it is the result of my personal reworking.

If I could, I would be in a trio and play rock music like Muse or Nirvana, but the reality is that when I start to write music, my style comes first and I mix my music dictionary with what I listen to. It sounds like a mess because I listen to a variety of different types of music, but this sounds normal to me. There are no boundaries. Music is just melody, accent, and rhythm.

There’s some quite clear nods to tropes from (the umbrella genres of) rock music, even grunge or shoegaze at times. Can you describe some influences there?

My first love with music was Nirvana, specifically ‘In Utero‘. I loved the chemistry they created with that album. For me it is the evidence that whatever you do, musical sound is the recipe. When you fall in love with a sound, that’s it. The other references are Silverchair, because of their song writing and voice, rhythm and guitar. It is an impressive wall of sound. Then Foo Fighters, Soundgarden, Noir Désir, The Smashing Pumpkins, L7 and Hole.

The album was mastered by Icelandic expert Jon Birgirsson — how did the connection come around? Were you in physical space together during this time or was it a distant collaboration?

I am a big fan of Iceland for its nature, history, culture and approach to life. I am also a fan of Scandinavia. The connection comes because each single album I have at home – all of which are on CD – have Jon Birgirsson listed as sound engineer. I travel to Iceland regularly and I know a couple of things about the place where he is working. So, I reached out to collaborate in person, but due to the pandemic we had to work remotely. However next year – we can hopefully collaborate in Reykjavik.

Are you familiar with entrusting the final process of mixing and mastering — the act of making salient the important aspects of the music — to others? How did you find it?

It is better to be in the same location at the same time and experience the process together. It’s unique, amazing and is magic. However, I have to admit that technology works. The results cannot be the same because they have two different approaches. I also think that Birgir had the option to work for a couple of months at the time and in the conditions he preferred. And this can also make a huge difference.

I recognized the songs where he was relaxed but he could organise his mixing the day he wants at his preferred time and you see the results. I am result oriented. So for me, the best solution for him is the best for me. You need a lot of trust, as the process is conducted by phone, email, links, feedback, again and again and again. Until we get it right. I’m curious to hear what the live sessions in 2023 will deliver.

Finally, I’d like to ask about the artwork – it’s a great piece and summarises the tone of the album very well. Can you [or the artist themselves] describe the piece, and how it came about?

The artwork is by Swiss artist Matthew Gottardi. The canvas doesn’t actually have a title, because of his intention to avoid any degree of conditioning and to leave the public’s imagination and interpretation free. But I thought this was really summarising in visual aesthetics what I was looking for with my music.

Gottardi says: “If I had to describe my work I would use words like “fire”, “light”, “salvation”, but these are only a few, simple, words. My works are born from a “non-project”. Yes, that’s exactly how it is, a “non-project”, because nothing I create is designed. I let myself be carried away by the materials, it is they who, by touching and observing them, guide me in the process of creating the work.”

This is exactly how I wrote my album. It is an interaction with music tools and new electronic devices, listening to new waves and making shapes out of them, with inspiration and some experimental work on the field to make it real.

‘Terre Brûlèe’ is scheduled for release 14 November via Broque.