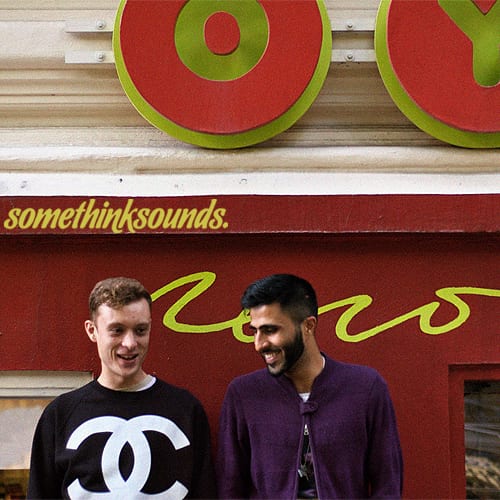 Somethinksounds have carved a niche for themselves over the last twelve months, winning renown for their strong visual identity and DIY spirit alongside a smattering of inspirational releases from Lucky Paul, Tommy Tempa and Eliphino. We took advantage of what seemed like the only week of summer in Berlin to catch up with Kazim Kazim Kazim, the guiding force behind the label and its sister magazine, Somethinkblue.  Tom Wrankmore aka Eliphino was also present, interspersing the boundless enthusiasm and passion of Kazim. Loitering outside Oye Records in the sunshine seemed like the perfect occasion to talk about inspirations, anti-inspirations and their plans for the future. The label / magazine has a series of birthday parties over the next few weeks in London, Paris, Berlin and New York. Not to be missed if you know what’s good for you.

Tell me how it all began

Kazim: When we first started it was myself, Tom, Karim (editor), Julia (art directior) and  a girl called Josie, who now lives in Barcelona. Josie left to go to Barcelona, and Tom left to concentrate on music, so now it’s just myself, Karim & Julia. Tom was living in Manchester. I was kind of living in Leeds.

We launched the magazine officially in November 2010. Prior to this we did a 6 month trial run, a pilot so to speak. After that we stopped, took some time off and came back another 6 months later in November 2010, launching the label at the same time. I like to see this November as being the first birthday for the label and the magazine, as when we started again it was a much more refined setup. We were a lot more serious about it. At first nobody really knew what we were doing, very much trial and error. Lots of errors.

What was your inspiration?

Kazim: I don’t know. Ideologically, what I liked about movements such as The Factory was this idea that you could get loads of people in the same place, have a laugh, take loads of drugs and party, and at the end there would be this cool product. Just from having fun together. I find that kind of ideology quite inspiring.

In terms of specific magazines, I read lots of little ‘zines that you pick up once and never see again because they run out money. Lots of those really DIY aesthetic publications I really dig. In terms of the really big big magazines, if anything magazines anti-inspired us, ones that we just saw and were frustrated by. They didn’t do anything that we wanted to see or read and be a part of.

When we started, we used to think Dazed & Confused and i-D were quite out of touch with what young people think. That’s how I felt, I dunno if I still believe that anymore. That’s how we all felt when we started it, I don’t know if we think that’s true anymore, at the time we thought we could change the world. It was more about magazines that didn’t do stuff we wanted to do, rather than trying to emulate someone else.

What made you move out to Berlin?

Kazim: I finished university and I needed somewhere to live.  I was really repelled by London, not because it’s a nasty place or anything like that, I just wasn’t attracted to it. Berlin seemed like the only other option really. It’s a bit like the North of England here, it’s a lot like Manchester and a bit like Leeds – there are loads of similarities between the two. Now after having lived here for 15 months now, I couldn’t live anywhere but here or the north of England.

What the story behind the name?

Tom: It wasn’t actually the domain name that was the issue. I was doing the website and techy stuff and I knew that if we wanted to appear anywhere in the first million results on Google, we couldn’t be called ‘Something Blue’, as it would return search results for wedding related products and services.

Kazim: It’s all down to Tom then, total mastermind. It makes so much sense now. Somethinkblue and Somethinksounds make perfect sense.

Tell me about the visuals, I find them very striking.

Kazim: If we’d had the money we would have made a real magazine. The idea was to create something online, that if you were to pick it up, you’d never want to lose it, you’d always keep hold of it because it was a such beautiful piece of publishing.

There’s a lot to do, all the photographers and artists who contribute are really amazing at what they do. I guess it’s always been about ensuring that the aesthetics and the ‘zine kind of approach remain. I think that’s kind of what we do differently to a lot of other web magazines, there’s a real emphasis on making stuff look pretty. I don’t think many other people do that as much as we do.

What are your favorite hotspots in Berlin?

Oye Records for one, I probably spend more time and money here than anyone I do else.  My favourite bar / club is Farb-Fernseher. It’s about a hundred capacity,  but there’s always about 200 in there. Horrible sweatbox, wild & cool at the same time.

Do you feel the magazine and label can continue growing side by side?

Would you put a certain style on the label’s sound?

On the bandcamp, it says new jack house.

Kazim: We were listening to loads of New Jack Swing at the time, and that’s what we wanted our house to sound like. Every time I go into a record shop, I’m always surprised to see what section the records are in. Tom’s first EP is always in the UK funky section, when it’s kinda more housey than anything else. Lucky Paul’s EP always in the slo-mo house thing, weird as it’s a bit more hip hop, electronica weirdo stuff than it is slo-mo house. I’m interested to see where Tom’s next EP gets categorized, out in October. Next single, which is a straight bomb. I think they’ll put in the house section.  You’d think that but I bet it ends up in UK funky.

What’s coming up next?

The new 3 track single by Tom aka Eliphino – ‘More Than Me‘. 3 bombs all in one. I think we’re getting a reputation for putting too much stuff on one vinyl, this is a perfect example of that. 3 A-sides on one piece of wax, which I don’t think you get enough of these days. After that, we’re debating what to put out next. We’ve got a 3 track EP from Gadi who runs Wolf & Lamb, who we just did a bit of a collaboration with, so we’re gonna be working more with them. We’ve also got a few tracks for an EP from Doc Doneeka, Photo Machine and this guy called Clik. What else? That’s the short distance, that’s all I can see right now. We don’t plan too far in advance.

Top 5 records (pulled from the shelves of Oye Records)