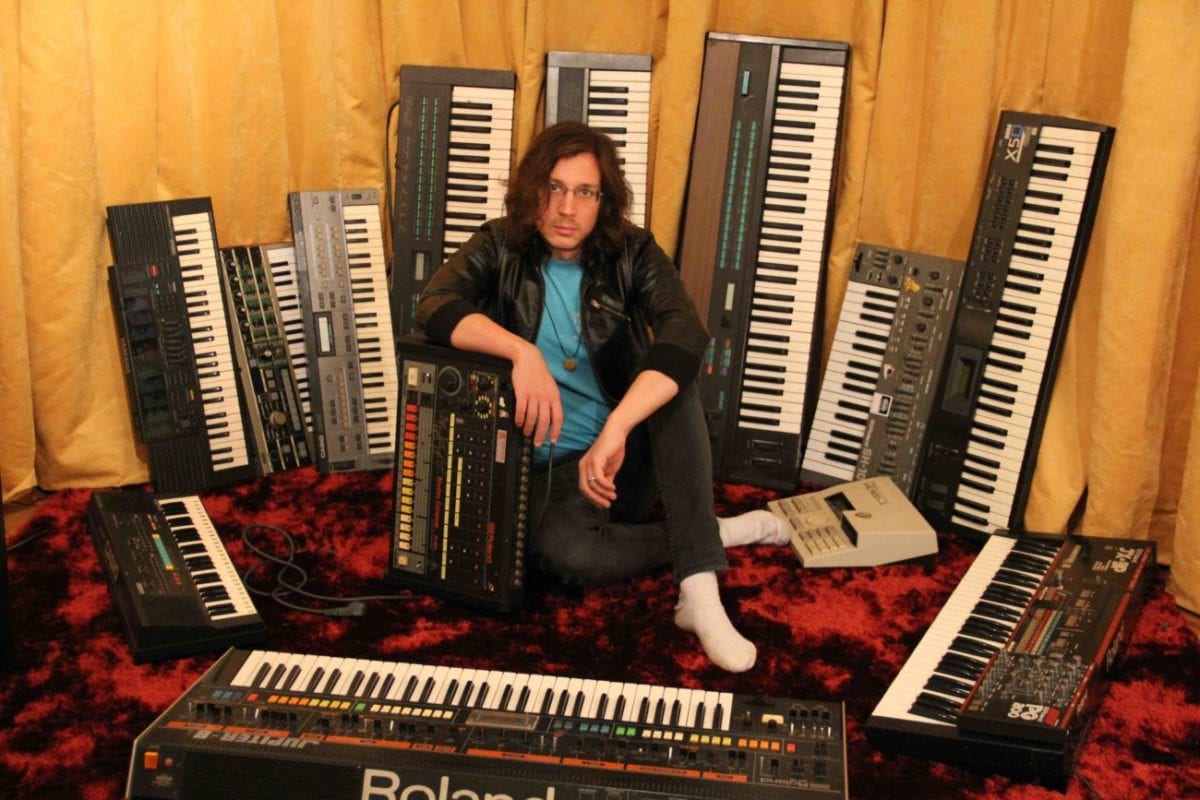 Danny Wolfers, aka Legowelt, has been releasing his own brand of electronica for nearly a decade now, and his uniquely analogue sound has brought him plaudits galore and releases on some of the biggest European techno labels. Based in The Hague, he’s an integral part of the close-knit, world-renowned italo/electro scene centred around Guy Tavares’ Bunker Records and I-F’s Intergalactic FM (formerly CBS), but over the past thirteen years he’s very much pursued his own muse.

In August 2011 Legowelt released his new album ‘The Teac Life’ as a free digital download. In exchange Wolfers simply asked for people to donate money on his website so he could squeeze more analogue equipment into his production studio in the Hague. His website is also worth a mention as this was his platform for promoting the new album and from the appearance of it, you get the feeling that web design hasn’t progressed much since the early 90’s. Despite the crude aesthetics and collection of animated GIF’s there was a no nonsense self written press release displayed on the web page that read:

“Its got a hella lot deep tape saturated forest-techno tracks on it and when I say Techno i dont mean that boooooooooooring contemporary shit they call techno nowadays with overrated tallentless pretentious douchebag cunt DJs playing a few halfassed dumb mongo beats and being all arty fartsy about it. F*ck that, I am talking about: Raw as fuck autistic Star Trek 1987- Misty Forests- X-FILES,- DETROIT unicorn futurism made on cheap ass digital & analog crap synthesizers recorded in a ragtag bedroom studio on a TEAC VHX cassettedeck in DOLBY C with an unintelligible yet soulfull vivacity.”

After reading this, I forgot about the crude aesthetics of the website and downloaded the album immediately. The Teac Life is a no nonsense masterpiece, the press release isn’t waffle as it explains exactly what his intentions are for the album. The album isn’t some overly polished or hyped album that demands attention, it’s simply a direct recording of what Wolfers is doing in his studio, no fancy intro’s or subdued outro’s, it’s real, raw and free.

We caught up with Legowelt before his live performance alongside Blawan, Serge and Dexter at Fabric this Saturday to find out more about his background, beliefs on sound design, Bunker Records and ‘The Teac Life’. We also have Legowelt’s Fabric mix available to stream in our player. You can also download Legowelt’s new album ‘The Teac Life’ by clicking onto the BUY button in the sidebar.

For those less acquainted, could you tell our readers who you are, where you’re from and what inspires you to create music?

My name is Danny Wolfers, I live on the seaside in Holland.  I make music under the name Legowelt and a lot of other pseudonyms and side-projects. The music I make derives its inspiration from many different angles. The blueprint and greatest inspiration are Detroit and Chicago stuff, English stuff from the 80s and 90s, old disco, soundtracks and Afrofunk.

What were you listening to back in the days? Do you come from a formal musical background?

I grew up with electronic music, house and techno, in the 90s anywhere from Orbital, Aphex Twin, Mu-Ziq, Irdial Discs to more obscure stuff from little dinky town labels all over the world. I don’t have much formal musical background I think it all started when I found some Underground Resistance and disco records on the street in the early 90s, somebody threw them away or something I guess, then I was like what is this this is cool and then of course in the early 90s that stuff was all over the radio, mostly pirate stations but also some on the state radio on Friday evenings.

When you’re a boy at that age all you just want to do is make music so I started dabbling on a Commodore Amiga computer. In 1992 or something one of those English Amiga computer magazines came with a disk with a music program called OctaMED as well as some instructions on how to use it. Looking back at it, I reckon that disk was solely responsible for starting many peoples careers in music production.

You’ve been producing music for the best part of two decades now, how have your production styles and approaches to music production developed?

You learn more over the years and a lot of new technology has been introduced…VSTs and more powerful computers but in the end I guess its pretty much the same, an Amiga with OctaMED, Atari ST with Cubase or a Mac with Ableton… In the end it all comes down where you put the notes I guess.

Some names stick, others don’t, and some say ‘What’s in a name?’ – Why did you choose Legowelt, is there a story behind it?

It was thought up in the 90s with a friend of mine. I needed a name for a gig I was going to play at and somehow it stuck – I don’t know why?

Technology has enabled producers to create tracks without ever even examining a piece of hardware. In what capacity do you use hardware and how do you interpret this trend towards staying ‘Inside the box’?

A lot of people think I only use hardware, this isn’t true. I’ve been using computers since the early 90s and I don’t give a fuck about hardware vs software anymore. People like hardware because it’s macho, but in the end most hardware is the same as software, its got chips and software but its inside a box with some knobs on it.

Those people who say real synths sound better, had a point back in 1998 but come on we live in 2011! If you have a good computer, a nice VST and a good sound-card nobody can hear the difference. It’s not about realistic sound quality anyways. I mean most techno and house classics were made on the most ghetto cheap ass digital and analog stuff from the 80s, with extremely meager computer power.

What are your core beliefs for good sound design?

I like stuff lo-fi, warm and raw. It gives a certain character to sound I guess, there’s too much clean stuff today, producers are trying to get a perfect clean sound way too much and that’s not even to blame computers. Now you can buy plugins these days that will make it sound great.

Please tell us more about your relationship with ‘Bunker Records’, their ethos and how you got involved with them?

Well in the 90s I was surprised that some of the records I heard on the radio and saw in the stores, came from The Hague. Of course there were a lot of labels in the Hague but not with that lo-fi Chicago and Detroit sound. It was mostly 90s proto-trance, club house, hardcore gabber and so on. I investigated the label and came into contact with its owner and gave him a demo tape and the rest is history.

Regarding their Ethos…well Bunker records is run by Schmerzlabor, an alienated speedfreak and madman genius. He’s mainly into weird psychedelic stoner rock and punk bands and so forth. That’s what he releases with his Motorwolf records. Bunker is an exploitation scheme as you make more money selling electronic music I guess, so all the money he makes with Bunker goes into Motorwolf.

In August 2011 you released ‘The Teac Life’ as a free download as well as giving people the option to donate money for you – What caused you to choose this method for distributing your new album and how did it work out for you?

I don’t know exactly, but when I started making those tracks I had the feeling that this was going to be the way. I wanted the tracks to be free and not confined to vinyl or whatever other format I could have chosen. I guess it was an experiment. People are very generous so this experiment worked out pretty good, I was able to buy some cool Casio keyboards, which I made some projects with. My Juno 106 was repaired too.

Do you envisage releasing any new material in the same manner as ‘The Teac Life’?

Probably, but people still want a vinyl release, so my next releases are going to be on a normal label. I’ve been working on an album for Clone for some time and there are a lot of EP’s and 12”s coming out.

What can we expect from your performance at Fabric?

Are there any particular musicians, producers or labels doing the rounds on your playlist at the moment?

There are a lot, although I’m pretty bad with names but I like the new BNJMN album, Rick Wilhite and XOSAR.

Do you have a personal philosophy or mantra to live by, with reference to music, and life?

Not really just do your own thing and don’t let any one tell you how it should be done.

Mantra wise…sure Worf from Star Trek says, ‘It is within! Here, HERE is where we meet the challenge!’ whatever that means.

Its all in that Worf quote already.