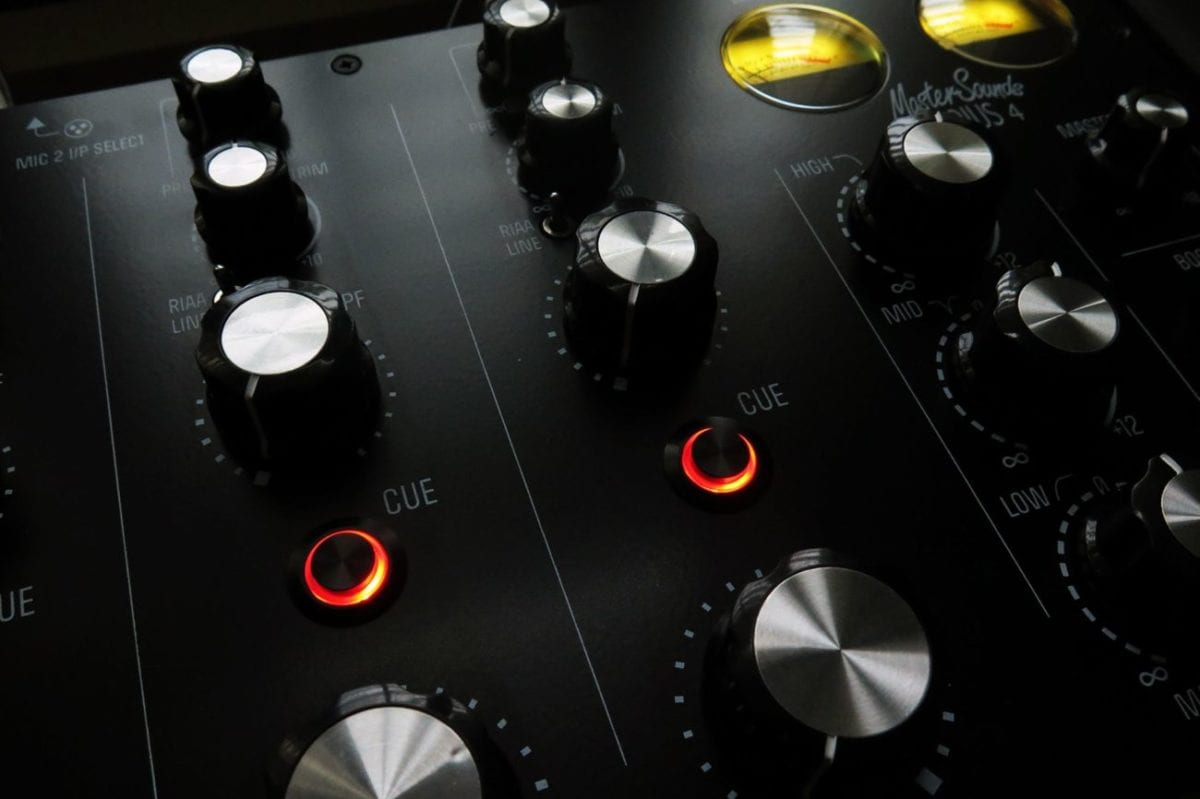 Tried + Tested is our new feature series where we road test equipment in a unique live setting. On the 9th June we teamed up with UK based vinyl enthusiast company MasterSounds to host a 6-hour vinyl only party at Peckham Springs with residents Antepop, Luca Schiavioni and guest selector Kalimo to test out the “Radius 4” rotary mixer for the very first time.

Before we get into the review, let us enlighten you with the equipment we used for the live review and recording of the music, plus a few facts from the Radius 4 press release.

With more than twenty years experience of DJing, as well as a background in design and manufacturing, MasterSounds founder Ryan Shaw states, “The Radius 4 is a fabulous addition to the MasterSounds range and is a response to customers who love the Radius 2’s unique design, but require 4 channels when DJing”.

The Radius 4 offers a fantastic clean, open and dynamic sound on both LINE and RIAA inputs across all 4 channels, as well as great usability. The mixer features easy-reading back lit VU Meters, a responsive Master EQ/Isolator, a smooth natural sounding Hi-Pass Filter, and Aux Send on each channel. A new and unique feature is the ability to reconfigure the Aux Return Jacks as a Mix Buss Insert, giving the user unparalleled flexibility for FX integration, simply at the press of a button. And the addition of two Mic inputs gives the Radius 4 the club standard specification seal of approval.

Since launching Inverted Audio in 2009, I have refrained from publishing tech reviews for the simple reason that I am not a producer. Over the past 18 years I have been actively collecting records and DJing. I’ve also had a fair amount of experience using an array of DJ mixers including the the legendary Bozak mixer found at Brilliant Corners and Behind This Wall Bar. However over the past two years I have been wrestling with the idea of purchasing my very own rotary mixer, but with such high prices at stake, an investment of this magnitude is far from a blasé decision and begs the question is it really worth it?

I do not consider myself as a pernickety audiophile, in my view if the music is loud enough to get people dancing, then that’s all that matters… or so I thought. After unboxing the Radius 4 first impressions were high. The build quality and aesthetics of the mixer are really satisfying and you really get a sense that you’re getting bang for your buck. The Radius 4 has a likeness to the design of a Bell & Ross time piece, the black metal casing and white markings justify a solid and functional appearance of a high quality instrument. The knobs are chunky and give off a sense of tactile authority.

Setting up the Radius 4 is very simple to do. Connect your inputs / outputs and switch on the mixer from the the back. Four red cue buttons illuminate along with the retro VU meters located at the top right of the unit. It’s elegant, uncluttered, classy and super appealing.

Being mainly a bedroom DJ, the mixer I predominantly use is a Pioneer DJM 400, a two channel digital mixer that cost around £500 (when I bought it). It’s built in effects unit is sometimes used to add atmosphere to transitions, but as any Pioneer user will tell you it will amplify the sound levels unnaturally and can sometimes make transitions sound awkward.

In terms of controls, the Radius 4 has you covered; master and booth volume, headphone split, and controls for high, mid, low for the overall output of the mixer, but not for individual channels, which would have been a nice addition. Each channel has their own “trim” volume controls, so you can ramp up the volume on quiet or coloured records. Each of the four channels also features a headphone cue button, so you can preview each channel in your cans, which is my favourite aspect of this rotary mixer.

Whilst in the mix the HPF (High Pass Filter) is a very useful tool, particularly if you are used to digital mixers and switching the bass down before introducing the new record, this is exactly what the HPF is designed for. On the record you’re bringing in, simply turn the HPF on full whack and gently increase the volume for the new track whilst simultaneously lowering the intensity of the HPF. The result is a harmonious mix, which can be made more intense by adjusting the intensity of the HPF.

Another question about using a rotary mixer, if you cannot control the hi’s, mid’s and low’s on each channels, what happens when two channels are playing full volume…does it clip the audio and make it sound weird? No the Radius 4 components are of such high quality that it blends the mixed music together like butter.

If you’ve been down to Peckham Springs before you may have noticed their speaker system is not of the highest standard, it lacks a sub woofer / bass bin and only really supports the hi’s and mid’s. However the Radius 4 made a vast improvement to the bars sound system quality. Even the bar staff noticed a significant improvement to their standard setup.

After using the Radius 4 it has convinced me that if you’re a vinyl addict that wants to progress their DJing skills, investing in a rotary mixer of this quality is well worth the hefty price tag of £1450 / £1600 for the pimped up version. The Radius 4 demands your attention and getting used to it does not take long. If you get the chance to use one, you have to try it out! I just need to get saving so I can buy my own! 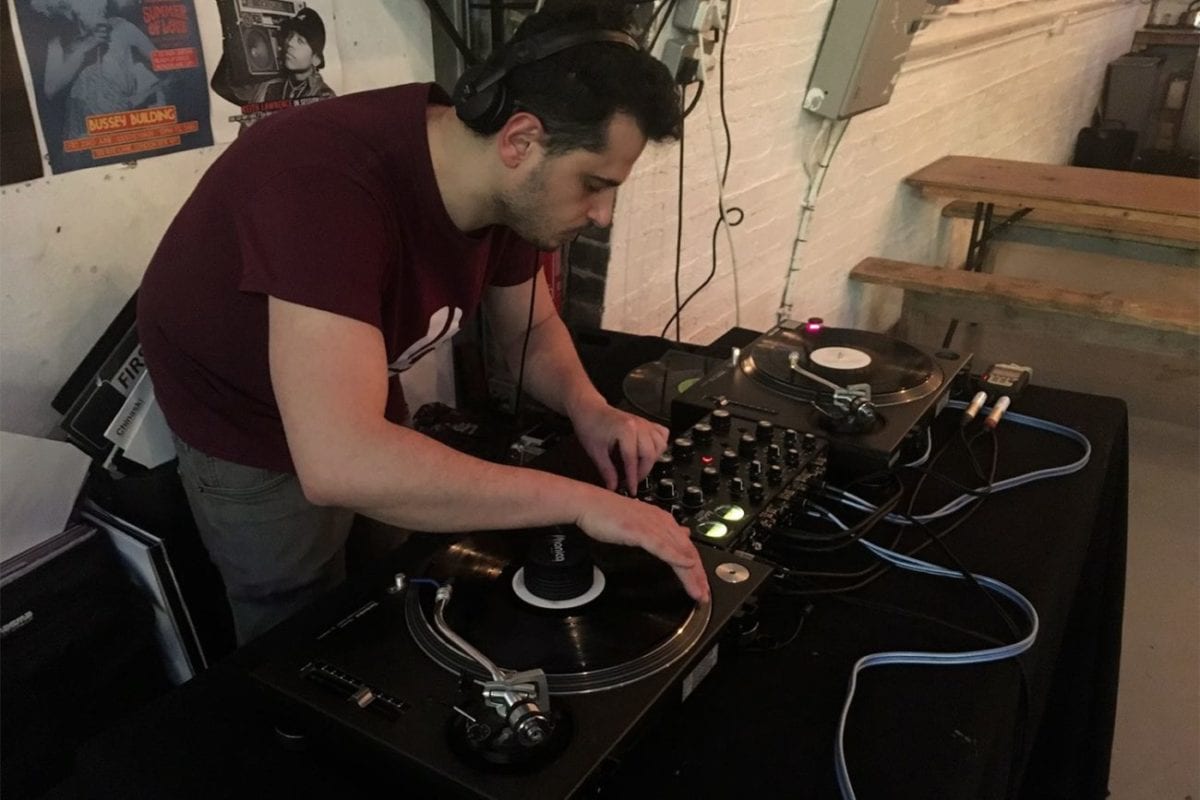 As a vinyl DJ, there’s two things you really want in a mixer: sound quality and ease of use. After two hours of using the Radius 4, I’d say both are there.

Tracks sounded warm and powerful. The mixer clearly returns a full spectrum of frequencies and allows you to appreciate mid and low ranges much more than you do with most common DJ mixers out there. It makes such a difference when you and the dancers are able to appreciate the real bassline coming out of a record!

Even when I stepped off the booth, I could hear how the mixer was getting the most out of the sound system in the room. Rich and detailed sound even at relatively high levels of volume.

In terms of ease of use, I think the Radius 4 fares well compared to most rotaries I’ve seen and tried. These mixers are often lacking some basic features that DJs want, such as the ability to pre-listen to multiple channels in your headphone, or control of levels and frequencies on each individual channel.

The “trim” control allows you to level volumes across channels to ensure consistency; while there is no full control on the EQ of each channel, the high-pass filter can be used during transitions when you want to reduce the base on the outgoing tune. This makes sure you can engage in long transitions, which is very important when you play electronic music!

The knobs feel quite smooth. I was expecting them to be a bit harder to be honest, because that’s what you generally get on a rotary. However, they give you just the right amount of control – there’s no risk of being too quick in moving up or down.

Also, the layout is pretty good – there’s enough space between the various controls, you instantly learn where you should put your hands.

All in all a great piece of equipment, Master Sounds seem to know what they are doing with their line of mixers! 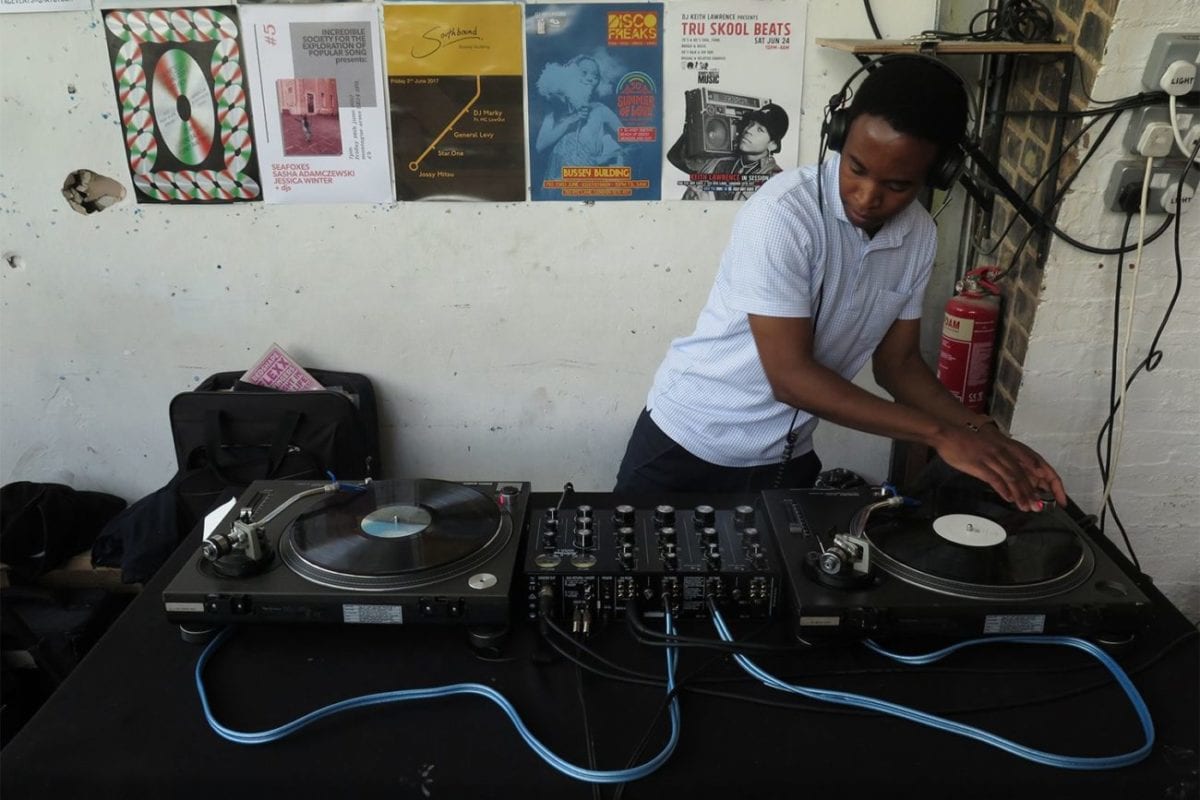 When first seeing the mixer you really get a feel for the strong build quality and craftsmanship that MasterSounds are so proud of. The exterior shell is made of metal and you do feel like you’re using a really well crafted piece of sound equipment with no compromises in quality.

One thing I particularly liked about the Radius 4 was the lack of clutter. You have a level control, high pass filter and trim control on each channel and your three-band EQ or isolator on the master.

At first I felt like I had less control than I would have liked in terms of manipulating the frequency bands on each channel however the more I used this the more I got to appreciate the beauty of the high pass filter and the sound as a whole. You really get to grasp how well thought out the bare essentials are on this mixer. MasterSounds have done an impressive job in ensuring these go a long way in translating each record clearly with no need for a plethora of effects. You can really cut or push the sound with this with very little apparent resonance that you sometimes get on DJ mixers.

Speaking of effects or lack there of – my opinion is that the isolator is where this mixer starts to gain more ground. You really can push the frequency bands without making your ears bleed like you sometimes get on other mixers. The Radius 4 nearly felt like a playable “instrument” at times – if you’ve ever seen Theo Parrish play a bunch of records you’ll understand what I mean.

Finally, the sound quality is phenomenal. I am no audiophile but it just sounds right. You have all the clarity and warmth that you expect from a rotary mixer and more. An extra nice touch MasterSounds have included is the old school level meters that seem to be surprisingly accurate. They also flash red when you’re too hot which is a very useful feature after a few beers.

If there was one area of the mixer I would criticise, it is the lack of cue channel fade but when the Radius 4 is so strong in other areas you can live with that. Overall I’ve got to say this was definitely a fulfilling experience. It’s going to take some time for me to get re-accustomed to the typical high end club mixer I’ll be using tonight.

Standard VS Premium: The £1600 option includes the finest sounding esoteric operational amplifiers on the market, which aide to the already superb transparency of the standard unit. 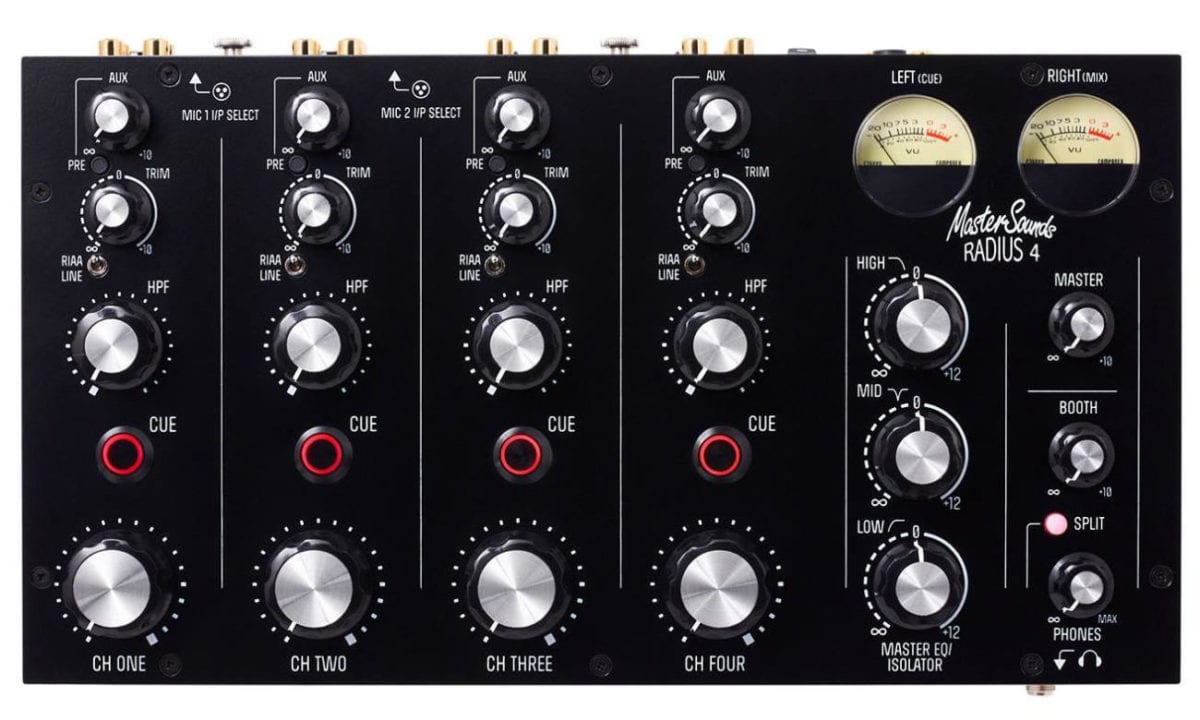