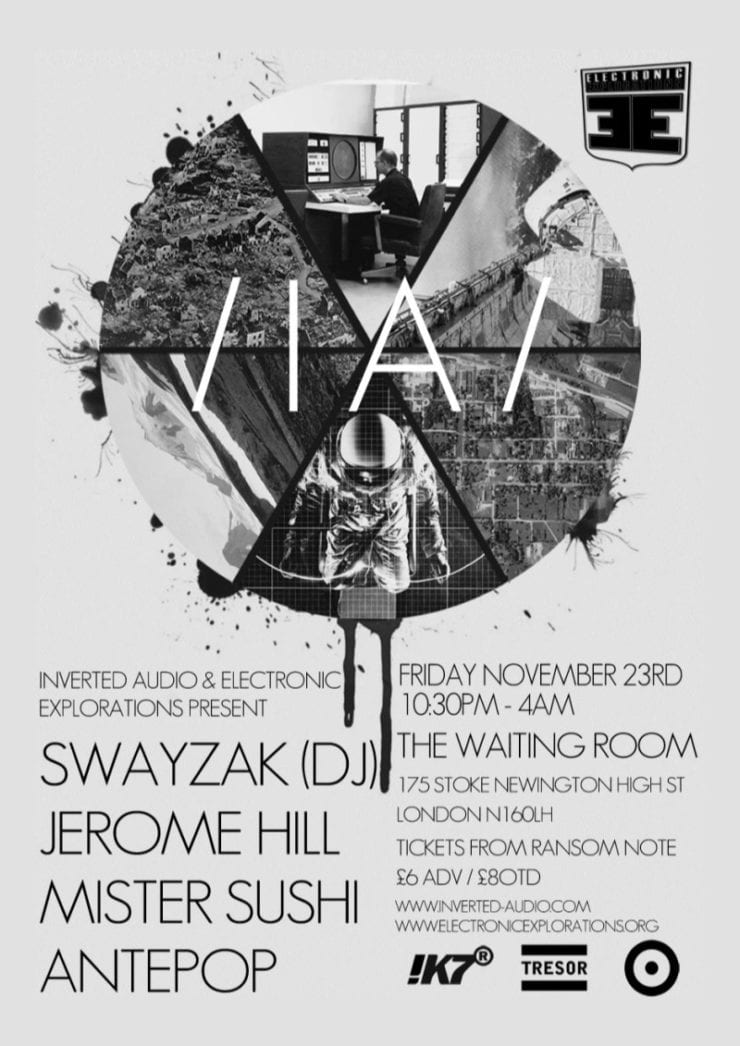 Following our event in September with Luke Abbott, Dan Tombs and Rival Consoles, Inverted Audio have collaborated with Electronic Explorations to present a techno fuelled evening from Swayzak on Friday 23rd November at The Waiting Room in Stoke Newington.

In the second of a bi-monthly series Inverted Audio have collaborated with Electronic Explorations, the weekly online radio show that showcases the furthest regions of the electronic landscape. With upwards of 80,000 listeners per week Electronic Explorations is a musical benchmark. On Friday 23rd November the show turns five years old, and what better way to mark this auspicious occasion than with gathering of like minded souls. Early arrival is suggested as you could be in for a chance to take away one of fifty limited edition mix CD’s recorded exclusively for this event by Swayzak.

The headlining DJ set comes from an artist who should require little introduction, Swayzak. Formed in 1993 Swayzak comprises of James S. Taylor and David Brown. With a sound that owes as much to the likes of Laurent Garnier and Richie Hawtin as it does to the house and techno sound they’ve helped pioneer via their four !K7 long players and legendary Fabric 11 Mix CD. In July 2012 David Brown released his solo debut S_W_Z_K album on Tresor (video interview), showcasing a sound deeply routed in techno and the club that is home of the albums release.

In main support a gentleman who is no stranger to Tresor and is an encyclopedic knowledge of music, Jerome Hill. Cutting his teeth in the early 90’s, Jerome has DJ’d everywhere, from Japan to Venezuela and is regarded as one of London’s most forward thinking and hardest working electronic music trailblazers. His label Don’t is known for putting out some of the most unique techno records of recent years and Jerome’s set on November 23rd will no doubt offer an insight into his labels ethos and his personal record collection.