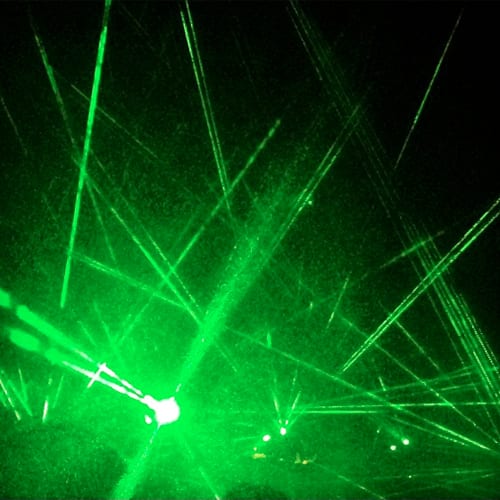 On Wednesday 10th October the Barbican Centre presented the UK debut of Aphex Twin’s Remote Orchestra. Revered globally as the most celebrated pioneer of electronic music Richard D. James has not only redefined the boundaries of the electronic cultural landscape but has also solely become the most anticipated and sought after producer and composer of the past decade. Without his unique approach and influence countless contemporary producers would not have dedicated their lives to explore the hidden depths of his music composition to purely mimic it in their own way.

In 2011 Aphex Twin presented for the very first time in Wroclaw, Poland his Remote Orchestra, made up of The Heritage Orchestra and Choir. He directed a string section and choir by remote control via a synthesiser track with the aid of visual cues that told them how to play. Thus allowing him, with different cues, to compose and communicate with the orchestra and choir.

At the Barbican, he projected seven animated colour coordinated channels to communicate to the 28 piece orchestra and 12 piece choir, made up with instruments such as violin and double bass, amassing 32 seperate outputs.

Within the official programme sound engineer James Harley stated “This is a more ambitious and adventurous – James intends to write chord progressions and movements, so now he can get incremental, microtonal slides between chords…There is a mathematical reason behind everything we’re doing, but in the end, the actual performance depends on humanity – that’s what makes it so exciting.”

Once seated the auditorium plunged into darkness, the orchestra stood motionless facing Richard at his control desk. Unfortunately what followed was, at least initially, distinctly underwhelming – over half an hour of atonal drone that left the impression of a huge opportunity wasted. Conceptually it’s flawed – the audience only receive half of the ‘conductor’ input, namely the visual cues, and whilst you can tell the effect these are having to an extent, there’s hardly any novelty to be found in an oft-repeated message that effectively oscillates between ‘off’, ‘quiet’, ‘loud’ and ‘very loud’. The audio cues James supplies to the orchestra could be anything at all, for the only people to ever hear them are the players themselves, via headphones. This adds to the notion that maybe, just maybe, someone’s having a little joke. And with such a notorious prankster at the controls, who could blame us for being suspicious? What odds that legendary 12″ disc of sandpaper is at play somewhere under James’ control desk?

Perhaps the main problem here is history. As well as the niggling doubts, it’s the thought of what might have been. Aphex and an orchestra – would it be unreasonable to expect something near the majesty of Philip Glass’ astonishing orchestration of “Icct Hedral“? Perhaps that is setting sights a little high, but what we get is more akin to a child experimenting with a new toy, as James seeks to extract the sort of barbaric tonal exchanges from his steeds as he might from one of his home made synths. A friend of mine had apparently asked James some time ago what we might expect from tonight and the response he gave was ‘it should be interesting’…. I’m sure it was, if your initials happened to be RDJ. Others around me were restless, or even in some cases, asleep. The intermission was a welcome respite for most.

The second part of the show (assuming you stuck around for it) brought some payback, however. A premiere of one of those prepared piano pieces that had made up a large (and many would argue best) portion of his last ‘proper’ studio album,  “Drukqs”. And this was one prepared piano. A clavinova that James could play remotely (the technicalities of this remain unknown to me), it was placed on a platform suspended slightly above the stage, suspended from the rafters of the Barbican. Two helpers in Aphex t-shirts took up the slack of ropes on either side of the stage and proceeded to put the whole thing into motion. As it swung back and forth across the stage under dim lights, James played from behind his desk, a plaintive melody that enchanted the audience after the rigours of the previous section. The subtlety of the whole thing was underscored by the contact microphones set in the contraption, which amplified the sound of the creaking ropes and platform, providing a strangely mechanical, metronomic rhythm. Over far too soon, if the whole show had been James performing this piece for an hour, I daresay it would have been lauded as genius.

But Aphex is wont to experiment. And in the final section of the show, he undertook a cover version (of sorts) of another famously ‘anti’ composer, Steve Reich. His version of ‘Pendulum Music’ was again set to life by a number of helpers, who triggered the motion of ten pairs of disco balls swinging to and fro. No ordinary disco balls – each contained a microphone and as it swung over a speaker placed below it on the stage, fed back one of a range of tones to James’ mixing desk in the centre of the arrangement. Cue more metronomic sound effects, though this time of the rather more ear-splitting variety, including a ferocious sub-bass. Throw into the mix a raft of green lasers fired at the disco balls, creating a spectacular array of light in the auditorium, and things were looking interesting. However, once the initial impressiveness wore off, and as it became clear that the pendulums (sp? pendulii?) were going to take quite a considerable time to come to rest, this once again became something of a turgid affair.

The applause at the finale was rapturous, but it felt like as many people were cheering the fact they could now go home as were requesting an encore. The audience filed out remarkably quickly, and the whole thing was over, with the exception of one last jibe at ‘the establishment’ – James eschewing the standard bow for a pair of thumbs up at the punters. I’m sure he had a great time.