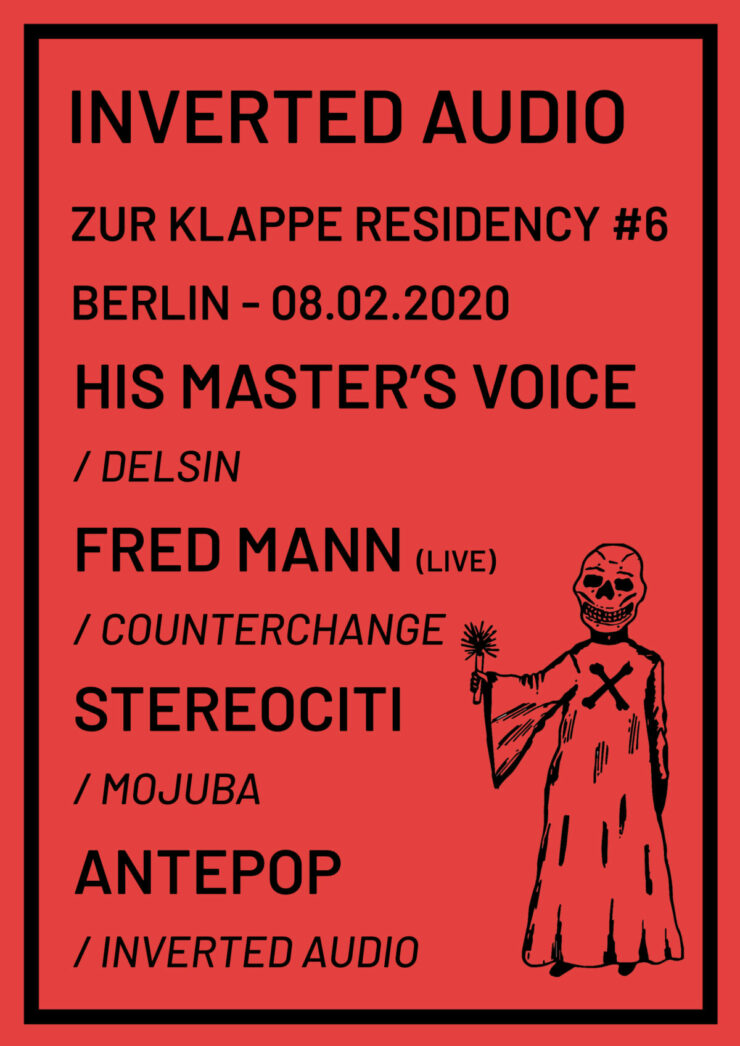 His Master’s Voice is an enigmatic figure in the world of electronic music. His production output has been scarce and relatively under the radar so far. First came a debut EP, ‘Sirius Incident‘, on obscure imprint Schleifen. Then the track ‘Ona‘ – a melancholic synth heavy guitar jam released on KANN in 2018.

Last December he released an EP on Delsin, featuring a sublime remix by Vril. ‘Transition‘ EP presented a thoughtful and mature record that demonstrated his mastery of additive production techniques. To coincide with the release of his debut album ‘Log: α Canis Majoris‘ in February, we cannot wait to hear what His Master’s Voice has in store for Zur Klappe.

Ahead of the release of his debut track on Inland’s ‘Stream State‘ compilation on 21 February, Fred Mann joins us for a rare presentation of his blistering live set, composed of experimental electronics, rugged IDM, pounding techno and technicolour rave. Fred Mann will be bringing his studio down to Zur Klappe, expect an overwhelming musical experience.

Born in Japan but now operating out of Berlin, Stereociti – real name Ken Sumitani – has released the majority of his music through Don Williams’ seminal Mojuba imprint, expanding the ranks of fellow label artists including Sven Weisemann, Oracy, Chez Damier and Nick Solé and garnering no less than two albums and four extended players on the label. Sumitani also operates his own imprint Waveguide, a no-nonsense outlet for Detroit inclined dub techno.

As with all of our residency nights at Zur Klappe, Inverted Audio founder and editor-in-chief Antepop will be on hand to serve up a potent all vinyl affair of underground electronic music.