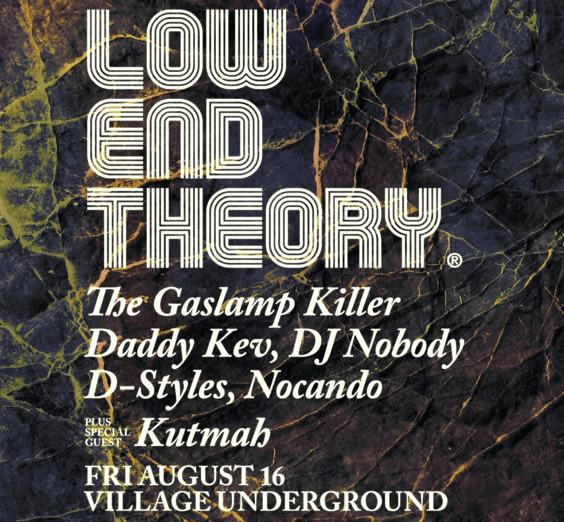 Low End Theory is revered across the globe for supporting visionary artists, promoting breakthrough sounds and nourishing a vibrant artistic community. Blending experimental hip-hop with futuristic electronic sounds, Low End Theory is a hub of the beat community and a place where creative minds congregate on a weekly basis in Los Angeles, monthly in San Francisco, quarterly in Japan and thanks to our friends from Soundcrash the city of London will be this collectives next stomping ground.

With a line up featuring no other than Brainfeeder’s most dynamic performers and producers The Gaslamp Killer. The legendary D-Styles  who played a pivotal role in the foundation of the scratch music community and helped transform turntablism into a global phenomenon. Plus Low End Theory resident and one of LA’s most treasured producers, Nobody.

Soundcrash presents the first London takeover from the legendary LA club night at East London’s Village Underground on Friday August 16th featuring the resident crew in full plus resident in spirit, Kutmah. A unique chance to experience one of the most influential club nights in the world without having to pay for a transatlantic flight.