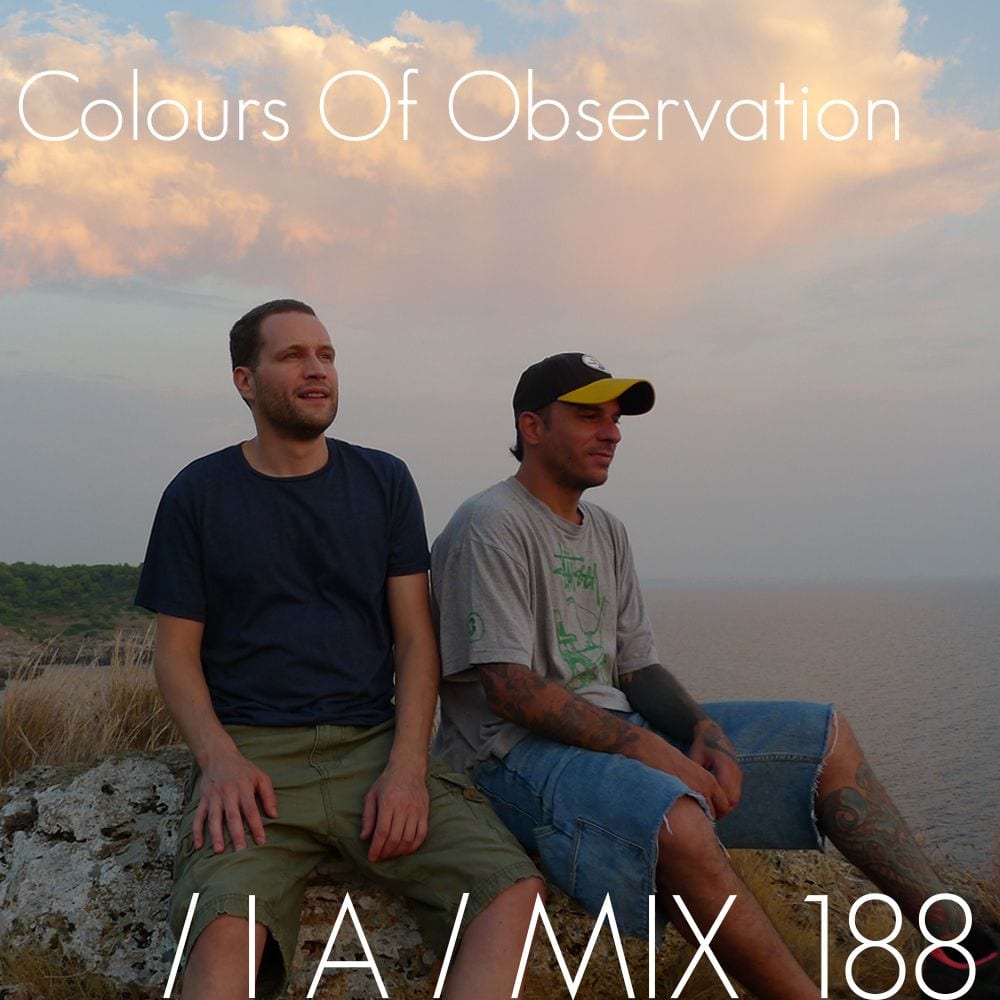 When the announcement was made that Christopher Rau and Marieu – one-half of The Analogue Cops – were teaming up under the name ‘Colours Of Observation‘, excitement was hard to contain. Not only have the guys carefully sculpted an ever-challenging techno body of work but also took part in some of the greatest collaborative efforts of the last decade. With their debut release ‘Sidewalk Romeos‘ scheduled for release on 28th September 2015 via OUT-ER, the Berlin-based duo are clearly setting the bar high, both in the studio and through their live project, tested and approved at OHM earlier this year.

For this occasion, Marieu and Rau have graced us with a wide-angled, hot-on-reverb hotchpotch melding mostly dubbed-out cuts but stepping in on trap, afrobeat, dancehall and hip-hop grounds with equal ease, proving their inextinguishable curiosity and extra-large sound-scope as sharp as ever. From floor-shredding, subterranean dubstep wobbles to smooth African folk songs melodies onto straight pot-fuelled, Babylonian vibes, it’s as much of a trip through the history of music as a whole as it is of a peculiar journey through both producers’ very own background. Essential.

How and where did you guys meet?

Marieu: I remember meeting at Tresor during their New Years Eve party in between 2013 and 2014. Christopher played before Domenico Cipriani and I, featuring many releases from my label Restoration Records. After a couple of days, I just felt like getting in touch with Christopher to say thanks. I invited him over to my house in Berlin for an Italian coffee and from that moment on, we began hanging out. We also realized that we were neighbours, an unexpected but relished coincidence.

Christopher Rau: True! And that coincidence helped our friendship grow quickly. I knew The Analogue Cops from before as I received Marieu and Domenico’s album ‘Heavy Hands‘ from DNP Distribution, and whilst listening, I thought “Hey, this is really good!”

When Marieu approached, I immediately wanted to meet him. We exchanged some records and had a nice conversation. Our relationship built up naturally…at first by music, then by our similarities. 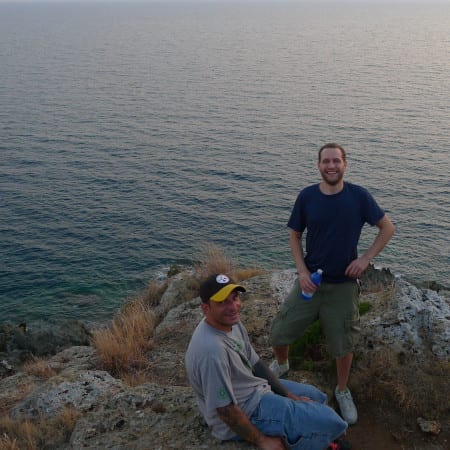 Apart from making music, what activities do you get up to?

Christopher Rau: When I’m in Berlin, you can catch me mostly at my house or at Marieu’s. Most of the time, we meet at Marieu’s where we can relax and enjoy our time together. It is comfortable and stimulating at the same time, because there’s only Italian people talking loudly, cooking flavourful meals and watching films. I like the Italian culture. I’ve been in Italy many times and I’m able to speak bits of Italian, but most of the time I don’t understand much. It’s good to be an alien, sometimes.

What attracted you to work with one another?

Christopher Rau: To be honest, we never planned to work together. Making tracks as a duo resulted from a strong friendship.

Marieu: ‘Sidewalk Romeos‘ rose from a jam session during a typically gloomy afternoon in Berlin. When we feel inspired, we just step in the studio, switch everything on and free our creativity.

In May 2015, Simone Gatto visited me and discovered a folder with over 10 tracks made by Chris and I. He has always been a fan of each of our music, so he literally “stole” them, copying and pasting them onto a USB drive without even listening. Some days later, he came back to me saying he totally fell in love with 4 of the tracks and wanted to release them.

How would you define the Colours of Observation sound?

Marieu: Our music represents our personalities and artistic identities. It’s just as it is, spontaneous.

You played your first set as Colours Of Observation at OHM in May 2015, and recently at Knick Knack (Italy). How did those two shows work out?

Marieu: At OHM, it was the first time we’d ever performed together. It was a test for us. The Italian gig at Knick Knack was definitely more balanced and fun. We were checking what each other played, so that we could adapt to the other’s selection. The more we play together, the more we bolster our confidence.

Christopher Rau: While at OHM we played two records each, in Italy we selected one per time. In the second occasion, I felt the mood built up nicely, for us and for the people. I don’t feel like over-analysing a party, especially if it was good for everybody.

What does your live setup consist of?

Marieu: We have a lot of gear and we always change the setup. We use drum machines, effects, an analogue mixer, a compressor and an equalizer. We always use an Akai sampler. I was using an old midi sequencer before, too.

Christopher Rau: And that sequencer was cool!

Marieu: Yes it was, even if it wasn’t my cup of tea. I started using it when I moved to Berlin 8 years ago; at the beginning it was really hard to write down… now I can handle it. Most of the time, Chris and I use the setup I have in my studio, so the final musical timbre is similar to The Analogue Cops’ one. 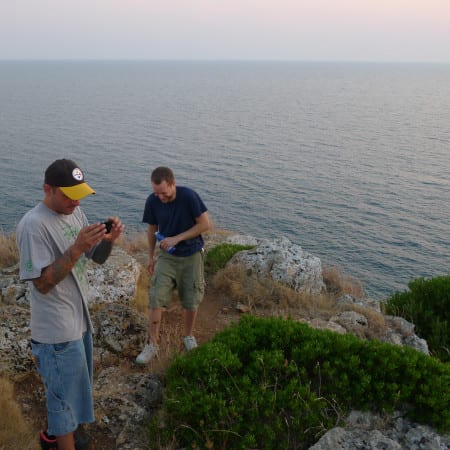 What makes this project different from your other recordings? We can still recognise elements from both artistic identities in the tracks?

Marieu: Yes, definitely. When I’m working with Christopher, the only big difference is the mixing. Normally, when we make music as The Analogue Cops, we never change the setup once we find it. Whilst as Colours Of Observation, we keep changing the mix.

Christopher Rau: Our setup makes the tracks sound rawer than my solo productions. Personally, I like making music this way.

Marieu: It’s hard to get a clean sound by making “one take” tracks in a self-made studio. You have to consider many factors: the final mix down, cables, filter on electricity, pedals, each of these factors can add noise in the background.

Do you guys prefer clean or raw records?

Christopher Rau: For me it’s not vital to choose in between. There’s good clean music and good raw music.

Marieu: I like both types too. In most cases I compose raw music, but I like buying and playing everything, from old-school to contemporary dance music.

Colours of Observation is an evocative yet opaque name. What’s the story behind it?

Marieu: Naming our project has been difficult. We got a lot of ideas, but Colours Of Observation fitted perfectly considering our personal approach to music and life. When we explore reality, we always see more than tangible happenings. We seek colourful perspectives while facing daily happenings.

What does a Colours Of Observation recording session sound like? Do you have any assigned positions in the process?

Christopher Rau: We start by sampling parts from old records. Then we keep adding elements we feel are appropriate. We haven’t established any rigid duties.

Can you tell us more about your first release ‘Sidewalk Romeos’, which is out in a couple of weeks?

Christopher Rau: Sidewalk Romeos is a graffiti painting in Berlin. When I step out of my house, I see it every day. I’ve liked street art since I was young, so I always observe graffiti as if I’ve never seen them before. This tag was inspiring to us, we can say everyone owns a little percentage of Sidewalk Romeos. I feel like a Sidewalk Romeo too, as I enjoy side walking when I have free time.

What do the track titles mean to you?

Marieu: The titles represent meaningful moments of our time in the studio. In general, when it comes down to naming tracks I look around, and when I see an object I appreciate, linked with an enjoyable memory, I write it down and that becomes the track title.

Christopher Rau: In my opinion, titles have a secondary role in the process, music always comes first.

Marieu: I think titles can increase sales. If a good track has a stunning title, its more likely people will buy and remember it. If not, I guess the crowd just dances to it. 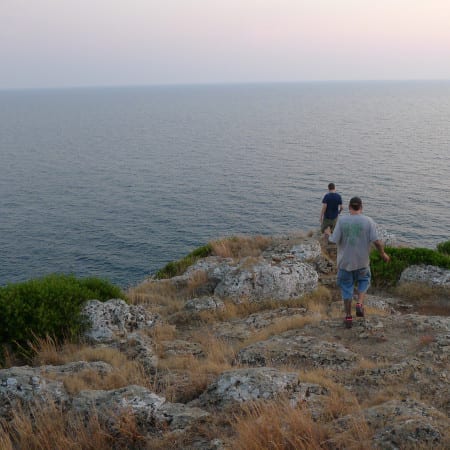 Did your experience of working in a duo (you, Christopher, with Jacques Bon and Sebastian Genz / you, Alberto, with Domenico Cipriani, Blawan, Steffi) reflect on your work as Colours Of Observation or was it a wholly different adventure?

Christopher Rau: This project is different from any other because it’s based on our friendship first. It was never meant for commercial aims, we never thought, “We have to do it”.

I appreciate putting out musically diverse tracks that can be connected to my artistic identity. I enjoyed working with Tilman Tausendfreund too; he’s now about to release on Frank Music from Johannes Albert, and soon on Smallville too.

Marieu: Domenico and I often work with many people. With Steffi as ‘Third Side’, with Blawan as ‘Parassela’, with the guys of Relative (John Swing and EMG) as ‘Appointment’, with No Mad Ronin as ‘Bratha’, and with Die Roh, Steve Murphy and many other friends. We like working in disparate ways.

When we start a project with somebody, we just have to coordinate on the right wave. After some tries, an interesting result comes out. Sometimes nothing happens, and a jam remains a jam.

Where did you draw your inspiration from for this debut release?

Marieu & Christopher Rau: There’s not a unique source of inspiration as our music arrives from daily happenings that we’ve been sharing during our friendship. It’s really spontaneous. 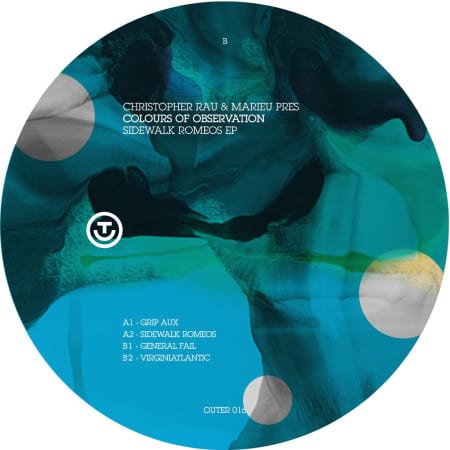 How does the environment influence your artistic inspiration?

When I’ve been in Southern Italy, I understand why so many local artists get inspired so easily: there’s just nature all around you. You’re surrounded by beauty, you have olive trees, an awesome coast and beaches, nice people and amazing food.

Christopher Rau: I agree with Marieu. We had a great time there and we’d go again just to be back in that mood. The atmosphere is completely different to Northern Europe. Personally, I always feel inspired after side walking, wherever I am.

Christopher Rau: In my opinion, composing depressed or abstract tracks is a form of hype today, like a trendy aesthetics. Obscurity is like a state of mind and it’s in the middle of society.

Can we expect a Colours Of Observation European tour sometime soon?

Marieu & Christopher Rau: You can expect everything. Life is all about expectations and disappointments.

What’s your schedule like for the next few months?

Marieu: Domenico and I will release with Steffi again as ‘Third Side‘, it’s forthcoming on Restoration in the beginning of October. I’ll play twice in Berlin, too. We’ll be soon back in the studio with Blawan for the Parassela imprint. We’re also going to release again as Bratha, and keep working on the another Analogue Cops’ imprint Appointment, it should host a new release in October / November 2015. As The Cops, we’re releasing an EP on Noho Records and another one on Bosconi Records, very soon.

Christopher Rau: During September, I have some gigs coming up in Germany and France. As a producer, I’ll let the labels speak for me!

Discover more about Colours Of Observation and OUT-ER on Inverted Audio.