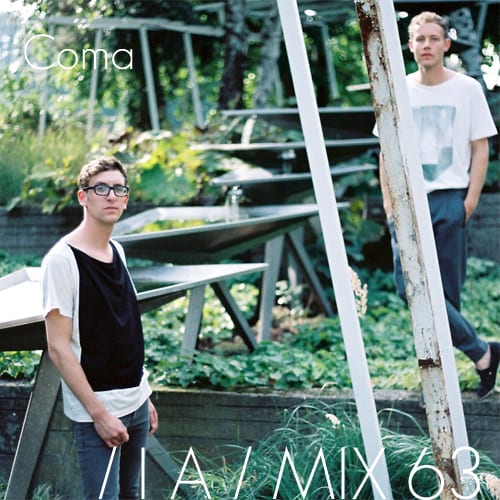 Ahead of their performance at Inverted Audio & 44’s event at The Lock Tavern on Friday 18th May, we caught up with the Cologne based duo Coma during their Indian tour to find out more about their forthcoming live hardware performance. We also discuss what it means to be part of Cologne’s rich musical scene and how they got involved with Michael Mayer, Kompakt, Tobias Thomas and c/o pop.

Coma’s mix is about heat, weird urban places and traffic. Their mix features Kresy, Aeroplane, Hot Chip, Roosevelt, LCD Soundsystem and many more, Marius adds “the whole mix reminds me of a taxi ride there. You never know what’s up next.”

How did the two of you meet? What circumstances led to you experimenting and producing music together?

We met during high school and we played in an Indie band before we both moved to Cologne in 2003. We had to deal with the fact that we had to do music in our flat and started to produce on a computer. And the result of course became more and more electronic.

What’s the concept behind the name ‘Coma’?

We chose a stupid mixture of our names when we searched for a working title and at a certain point it was too late to change it, but at the end of the day the word just looks nice on a record cover.

What’s your philosophy of sound design?

At first I have to admit, that I think sound design is an awful word in combination with electronic music because a lot of people believe that this is the most important part of producing this kind of music. Even in a club I always have the best time when the DJ catches people with emotional tracks. That’s also the kind of music we like to do and if we’re satisfied with the melody and the arrangement, we care about the mix and the sound design.

That does not mean that we don’t care about sounds. But if you have a couple of synths, you really know well, you’ll never create shitty sounds with it.

As Coma you’re renowned for fusing together elements of pop, house and techno seamlessly – What’s your current musical direction, do you feel you’re progressing your sound?

We’re always trying to reinvent ourselves because you can get bored very fast in this genre. At the moment we have to figure out the borders between disco grooves, cosmic reverbs and trash.

Can you please expand on how you created your mix – Your track selection as well as the overall theme running throughout?

This mix is about heat, weird urban places and traffic. We created it on our India tour, that we just finished and the whole mix reminds me of a taxi ride there. You never know what’s up next.

How does the electronic music scene in Cologne compare to Berlin? What elements would you take from Berlin and inject into Cologne and vice a versa?

What we like about Berlin is that clubs can spring up like flowers out of the blue. We don’t have this kind of underground culture in Cologne anymore. Concerning the music, we don’t really like the typical digital and minimal aesthetics that Berlin is famous for. Berlin is not an important influence for us musically, even though we spend some time there every year whilst working or visiting friends.

Apart from being from Cologne, how did you establish your relationship with Michael Mayer and Kompakt records? Can you expand on your journey prior to releasing your ‘Crystal EP’?

Crystal was a success for us since it was our debut on Kompakt. Michael Mayer knew from the beginning that Crystal had to be the A side, long before Sum and Reprise were added as B sides. It took about a year to finish the EP and to find the perfect B-sides. We’re so bad in exerting pressure on the label after having sent new ideas.

In the meantime Michael is much more involved in what we are currently working on. You can say that it was a bit hard for us to get involved in the beginning, because all the artists of the Cologne techno scene were much older than us and we probably had too much respect. But now we are like part of the family.

When did you get involved with c/o pop and festival director Tobias Thomas? What does the Cologne based festival mean to you personally?

It means a lot to us, especially our friendship to Tobias who has always pushed us forward. It was back in 2007 at c/o pop Festival where we had our first show ever, which was a huge success. Tobias got interested in us and booked us for his famous Total Confusion party, which became our stepping stone.

What can we expect from your live performance on the 18th May at The Lock Tavern – Do you plan each performance meticulously or do you let it develop organically?

A mixture of both. The tracks we play are pretty much pre-determined but they may vary in the length and style.

Can you run us through your live setup, what equipment will you be using?

We use Ableton Live for the basic loops, a MicroKorg, a Dave Smith “Mopho” analogue synthesizer, an MPC and a Kaoss pad and an Electro Harmonix voice box for vocoding.

When, where and with whom do you produce and record new music?

We have a couple of friends with whom we hang out with in our studio and we love to produce and work with them from time to time. We’re sharing the studio with Roosevelt, who will play with us at Lock Tavern on the 18th May. So we are usually the first listening to any new ideas from each other.

We’re eagerly anticipating the release of a full-length album from you. Do you have any words to share about that or any other forthcoming collaborations or records?

We’re eager as well and we hope that we’ll find the time to finish it soon. There will be a few collaborations for the album, but it’ll be a surprise.