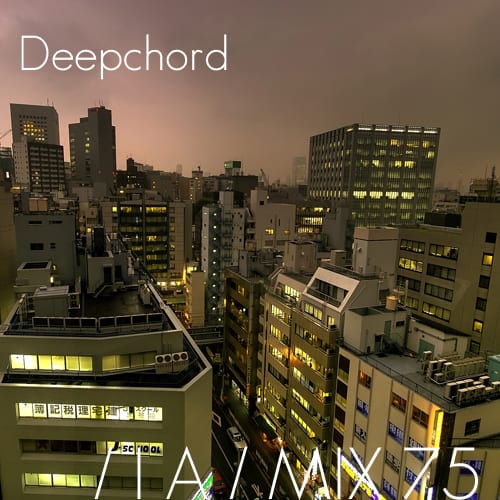 Last July we conducted one of our most in depth interviews with Deepchord, AKA Rod Modell. We discussed his past and present, as well as his  album ‘Hash Bar Loops’, the result of Rod’s visit to Amsterdam. A year has passed since we last spoke to Rod and he’s on the cusp of releasing his follow up album ‘Sommer‘, a lighter and more ethereal record released on Soma. To celebrate the album Rod has kindly recorded this stripped down, experimental Deepchord mix including some of his favourite tracks of the moment.

Since we last spoke what have you been working on?

Pretty much Sommer. I’ve never really been able to work on music for a specific period each day. I’ve always envied the people who can do that. Like… set aside 4 hours/ day or whatever. When I do that, I feel like I’m forcing it. So, sometimes I go for months without recording anything, then become inspired by something and lock myself up in my studio and try to get it all recorded before the inspiration fades.

This is the cycle for me. I guess… at the end of the year, I get about the same amount of work done as if I worked a little each day. I guess it’s just about regulating the creative flow. Everyone is a little different. Sommer was one of those moments that I locked up on the studio for a month and recorded everything before the inspiration faded.

Can you explain the concept behind the title of your new album Sommer?

The overall thinking was to keep everything (somewhat) less foreboding and ominous than previous releases, and to keep tracks shorter. I think it started out as a one or two track experiment and blossomed into a full length. Since the idea was to keep it lighter, I was searching for audio food/field recordings that imparted this lighter sensation.

I noticed an unexpected coincidence while doing this… all the recordings that seemed to work were sourced from summer time. A pattern started developing. Not to mention the weather outside was amazing. Balmy, blue skies, 75 degrees (fahrenheit), breeze coming into the studio windows from the beach. It just all got balled into what I was making.

What new themes have you explored in creating the album? The press release states that you’ve created an album with a “lighter more ethereal feel.”

I really don’t have a specific theme when I start, it just develops as things progress. When I used to try to make a theme or concept up before recording, it never worked anyway, then I just realized the whole process doesn’t operate like that. Doing that limits your progression. You need to be able to go in any direction the creative flow carries you to.

Sometimes when you force yourself to stick to a preconceived conceptual road map, you limit the possibilities. With Sommer, the theme wasn’t preconceived. It just developed after things started flowing. Yes…there were very general and vague ideas like “keeping it lighter”, but that was really about it. And I would have tossed that out the window if it wasn’t working… but it did.

Where did you spend the majority of your time writing the album and with whom?

It was recorded in Michigan at my home, which is about one hour (driving) north of Detroit. It’s an older cottage with views of Lake Huron from most windows, and a beach outside. It’s quiet, and all the neighbors leave in the winter months. Some of the houses around me are really just designed for summer use and not properly insulated, and some just live elsewhere because they find the winter too harsh. But I think it’s just as beautiful as summer, but differently.

In summer, I can walk outside and put my feet in the warm sand or cool water… in winter it’s amazing going out to the same place and hearing massive sheets of ice cracking. Or watch out the window at tug-boats breaking the ice (so large shipping vessels can get through). But the new album was recorded in the summer time here.

This one was solo. Steve seems to have way less free time lately than I do, so I’m available when he has some time, and then… we work on Echospace material. But if he’s strapped, or I’m away (in Amsterdam or Berlin), I’ll work on DC stuff. With his schedule as it is, I’m getting more DC things done. Hopefully that will change, but having a couple kids is demanding. I can live like I’m still 18 because I don’t have any. Children really make you understand the definition of responsibility (and limited free-time I think).

What new methods have you learnt in your creative process?

I’m using audio looping more and more as opposed to midi and midi sequencing. Most of the synths in my studio don’t have anything plugged into the “midi-in” sockets. I use audio loopers like Oberheim EDP and Electrix Repeaters. When Electrix went out of business, Guitar Center (a US music-store chain) was blowing-out Repeaters for $129/ ea. I bought 4 of them. So I’ll have a couple synths playing into a little submixer, and that submixer goes into a looper.

When I play something that sounds interesting, press the foot pedal and record. Then switch tracks on the looper and layer something else. These loops are what I was referring to in “Hash Bar Loops.” Almost none of the synth parts in that one (or Sommer) were sequenced. After I make a interesting texture, I can lock up a Sequential Studio 440 or Forat 9000, and put a rhythm over it, but usually this happens weeks after I record the background. I never consider beats when making loops.

I’m assuming you took the photograph for the album’s artwork. What’s the story behind the picture? Where was it taken and with what camera?

Yep. Did the photography on this one. I think it’s difficult to explain. The photo is of an old 1950’s motel not far from my house. I like it at night, and will sometimes ride my bike here and just sit. It’s all aglow at night with ugly buzzing yellow fluorescent bug-lights, otherwise it’s very quiet.

There is a pool. The place is something from a different era. I don’t think it will be around much longer. It’s in a prime real-estate spot, and I’m sure it will be bought up by Starbucks or something in upcoming years and demolished, so I’ve been photographing it while I can.

The back photo is taken at Ipperwash Beach (Lambton Shores Ontario, Canada). Same place as the upcoming picture-disc’s front photo. It’s about 35 minutes by car from my house. My grandparents had a home there. They lived there, and I spent all my summers there as a child.

I’m a bit of a camera junkie. I have a drawer full of them. This was taken with a Sigma DP1. My favorite one. I bought this when it first came out, and have gotten much more expensive ones since then, but keep coming back to this old one. It’s really horrible in many ways. It’s incredibly slow, sluggish, takes 10 seconds in between photos to write to the SD card. Auto focus rarely is accurate. Really, really, really aggravating to use. But the results always make me smile. The camera reproduces color better than any other I’ve used.

I did the Japanese skyline on the cover of Liumin with this one too. I took it to Japan three times, and the fourth time I took my new (at the time) Canon 5DmkII. When I came back and looked at the 5DmkII pixs, my heart sunk. They were terrible compared to the DP1, and the 5DmkII is 6x as expensive. I love these Sigma cameras. They take the best photos, but are amazingly unwieldy and difficult in use. Definitely not a “point and shooter”. A camera requiring lots of patience, 5 second shutter speeds and tripods. Like a digital Hasselblad 500c/m.

This album and Hash Bar loops both feature a deep red in the artwork, what’s your affiliation with this colour?

It’s my favourite colour, however the graphic designer had more to do with this than me. I really do like it though. And Orange also.

What do you have planned for the rest of the year? Will you be creating a new album exploring darker wintery themes?

The latter part of this year I’ll be concentrating on live sets more than recording. I can’t really determine when I’ll feel like recording again. My general rule is not to force it. I need to be inspired by some kind of energy to make new music. Weather is a primary influence. Also, geographic locations. Looking like I’ll be spending some time in Amsterdam again soon, so maybe there…. or maybe not.

Maybe I feel like I already did that w/ HBL. Lets see. I can never predict. When I do feel inspired, I’ll take in all the stimulus around me and encode it into sound and see what comes out. Knowing this, maybe I should try to put myself in extreme conditions and see how it sounds. Like Tibet. Or Varanasi India, That would be an interesting experiment. Maybe someday.

Please can you describe the mix you have recorded. Your track selection and overall theme running through the mix?

No real theme. I just pick a bunch of tracks that I like for some reason or another at the moment. Difficult to predict, and DJ mixes vary drastically from set to set. Probably more than most DJs sets do. I can do a mix from week to week, and they sounds like different DJs. I just know what I like at the moment, and share it. Like mixtapes in the 1980’s. I always have the idea to include electronic classics from 25 years ago, but anytime I try to mix those in, it’s a trainwreck. They never sound as good as I expect. So I drop the idea.

I like more experimental sounds. Stripped down. But anyway, my favorite songs at the moment are what I use.