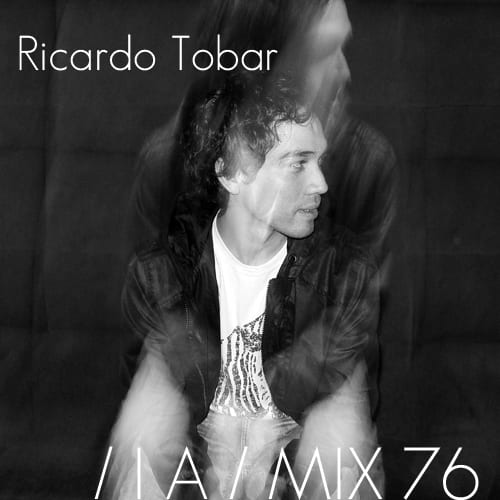 Having released his debut EP on James Holden’s record label Border Community plus a string of releases on Traum Schallplatten, it’s no suprise that Ricardo Tobar has left a lasting impression on us at Inverted Audio. His fusion of melodic techno, electronic rock and modern shoegaze music highlight a creative flair that is still seemingly untapped. With a new EP and album in the works we got in touch with Ricardo to find out more about his musical heritage, influences and forthcoming release on Natura Sonoris.

Please can you introduce yourself and tell us where you’re currently based and what you’re up?

Hello, my name is Ricardo Tobar and I make music. Im now based in Paris, just trying to become trilingual and finishing an album that I’ve been promising to my closest ones for years and years.

You’re originally from the seaside town of Vina del Mar in Chile. When did you first get interested in music and when did you start experimenting with electronic music?

I started really young, now that I think about it, probably at the age of 15. I was just listening to a bunch of songs that sounded really electronic to me. My mum decided to buy a computer for the house at the time and I downloaded some random software and started from there.

I first discovered your music in 2007 thanks to ‘El Sunset’ released on Border Community. How did you get involved with James Holden and his record label?

Yes, that was my first EP. I got in touch with them thanks to a demo I sent. They were nice with me and they released.

Do you feel your music was a good fit for the label and how do you think your music fitted in with their existing discography?

I supposed, I‘ve never thought about that. I hope I made a good contribution to their catalogue. And yes, at the time for me the music on their label was probably the only electronic thing I was listening to, so it felt an obvious choice to send my music to their house.

Do you think your music brought something new to the label and its legacy?

I hope so, I always felt really different though, but I suppose everyone does… haha. They marked an era and im really proud that I made my contribution to that for sure. I can’t say I brought something new… it’s really difficult for me to say that, but I tried my best.

Please can you describe the mix you have recorded for Inverted Audio, your track selection and overall atmosphere you’ve created in the mix? How / Where would you recommend people listen to it?

The mix is kind of weird really, the songs are all different so it was hard to put them together, but it’s the kind of dance music I’ve been listening to. I think it’s a living-room mix, you can enjoy it on your couch.

You’ve also released records on Traum Schallplatten – what attracted you to the label and why?

They have a really good back catalogue and they were really influencial at some point. Also a lot of the BC guys had released there, so I sent them a demo, it felt natural. I love the fact that they are like a really serious label, they are really professional.

This year you’ve released two EP’s, ‘Esoteric’ on In Paradisum and ‘Betweener’ on Knopjemusik – They’re both small labels, what is it about less established labels that you admire?

Well… with my music I’m really free and I can put my songs where I feel they fit, without anyone telling me snob-y stuff, you know? So this year I took the decision to release more and in the past I was already talking with Guillaume from In Paradisum, which also runs his Fool House label here in Paris. As I live here now and I loved the stuff he was putting out I made an EP with them. The same with Knopje, I know the owner really well, he is a promoter in the Netherlands and it felt good to release something in that country because they are such nice people. I think I like small labels because they are free to do whatever they want. That’s important for any kind of art form.

‘Esoteric’ is described as conveying an “unshakeable urge to lose yourself in the moment” – How do you go about writing music? Are you influenced or inspired by particular stimuli and environments?

I always think about this, but I don’t have the answer. I just try to create something special for me, with a whole meaning behind of it. The titles of the songs are really important also. I suppose everything affects me, im quite a pussy sometimes.

Two tracks in particular, ‘Pequeñita’ and ‘Recuerdos’, sound as if they are heavily inspired by the music of Aphex Twin (I’m going to assume they are) – What’s your connection to his music and methods, what have you picked up from Richard D James and used in your own music?

Well… Aphex Twin is like the god of electronic music isn’t he? I‘ve always loved his melodies, they are so deep for me. Sometimes the whole thing is chaotic, but he can just place a melody and everything is in order again. I can’t compare my music to that, but probably the main influence is that I try to be meaningful without being cheesy. That’s really difficult.

What equipment are you currently working with?

I feel so embarrassed about my equipment that I don’t like to talk about it. I have a cassete player… some drum machines…

Your mix features a new track of your called ‘Together’, which has been on YouTube since June 2011, as is one of my favorite tracks of all time – Can you enlighten me about the track and how you plan to release it?

That’s nice, thanks. Well that song is going to be out on Henry Saiz label, Natura Sonoris. We have been friends for a long time and he asked me if I had a song for his Balance mix. He liked it and wanted to do an EP with it. It has taken a while but it’s coming out soon with two more songs: Teenager and Jamaica sun, plus a few remixes.

You are yet to release a full-length album, when are you planning on releasing one?

Yes I will do it for sure, I have been experimenting for years to get where I am now, to feel good with my music. But I sense that I can contribute with something new again hopefully. I just don’t like to release something just for the sake of releasing. I have to find a label for that though!

From all the events you’ve played at, have you any disaster stories?

Yes, of course. Computers crushing are the worst of them, but people are always really nice and they cheer you up!. You gotta love people.

Finishing my album is the most important one.