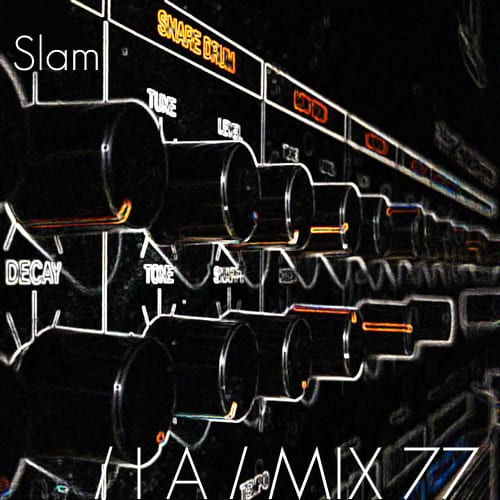 Slam need little introduction, the Glaswegian duo made up of Orde Meikle and Stuart McMillan established Soma Quality Recordings in 1991. For the past twenty years Orde and Stuart have kept their fingers firmly on electronic music’s rapidly-evolving pulse, experiencing on the front line what makes crowds scream, dance or cry, constantly pushing the boat out with their work as Slam, while carefully planning and introducing fresh new names to Soma.

Its been a year since the label celebrated 20 years of Soma, we decided it would be a good time to catch up with Orde and Stuart to discuss their origins, their record label, Glasgow, technology and their current musical direction. Their mix is a recording of the 2nd hour on Slam’s recent Return to Mono party at the Sub. They describe this as “the point in time where it’s still warm-up but getting into the groove and moving people toward the dance floor.”

Please can you introduce yourselves and tell us what you’ve been up to over the past few months?

In the last few months we had been touring quite a lot and working fairly hard in the studio amongst other things making singles for Soma, Drumcode and Figure and then more recently we both had a holiday, after the annual Slam Tent at T in the Park which we help to book and also play at. Now we are back at work, flat out in the studio – working on some tracks for the live sets and we are also starting to make tracks for a brand new Slam album we plan to release at the start of next year.

We mostly DJ on tour but we have 2  live sets to perform in the coming weeks – this weekend at the prestigious Voltt festival in Amsterdam and the week after at “We Love”  at Space in Ibiza.

How did the two of you first meet and under what circumstances?

We met in the mid ’80s. I had finished university in Sheffield and come back to Glasgow and got a job in a  Mexican bar/ restaurant called Chimmychangas and Stuart got a job in the same place around the same time – We used to fight over who’s tape went on in the bar at night and often go clubbing together.

What’s the story behind the name Slam?

When acid house records started to appear we both got excited by anything out of Chicago and one of these was Phuture’s acid track “Slam”. When we started our own acid house club night in 1988 we took the name from Phuture. Slam stuck with us as our DJ name and the name we used for remixes and producing records ever since.

How do you both go about writing music, who would you say leads the production and who comes up with the ideas?

We both have studios in our garages at home with the one at mine having most kit in it. It’s always been the place where we finish tracks off.  Stuart takes the lead with initial ideas more often than not. He will come in with a a few  partially worked on tracks – which we then can produce and finish. I am definitely more into the gear and the sounds and the process of developing the tracks in a production sense. We both enjoy a bit of experimentation.

How would you describe your creative process?

Sometimes we listen to music first to get in the zone, and then we play around with our ideas and usually get the drums and the bass line we want sounding good together  – then we try out many synth sounds until we find what we are looking for-  for the bass sound and other instrumentation- then we go in whichever direction feels right – often the best tracks we have done have come from this type of experimentation and they are happy accidents and even if we spend a lot of time producing them the initial idea might only have taken a few hours.

Do you prefer to produce together in person or are you happy to produce individually and pass tracks back and forth?

We do both actually –  but in the end we always have had time together in the studio to get things finished and to get things right.

Soma celebrated its 20th anniversary in 2011, both Slam and Soma have developed a definitive club-facing profile, are you happy with how you’ve developed or would you have liked to have been more experimental?

We get the chance to be much more experimental and expressive in a different way on albums because the tracks are not intended to be played by DJs in clubs  or in our live sets at parties in full swing. When we make singles and remixes which is what we have focused on over the last 3 or 4 years then the music is mainly aimed at dance floors – and no matter how varied those dance floors may be there are limitations on yourselves as producers – This is why we are saying no to remixes and focusing on an album over the coming months to allow ourselves the chance for more experimentation in the studio. And with Soma the more well known releases over the last year or two again would probably be remixes of the back catalogue or singles by many artists but all aimed at the floor – But it’s not  the same if you listen to the labels repertoire of albums- you’ll find a lot of home listening and therefore much more diversity and definite experimentation from artists like Vector Lovers, Hatikvah, The Black Dog, Deepchord and more recently Alex Under’s down tempo album release ‘Le Maquina de Bolas‘.

Over the years we always have had that side to Soma which is one of the reasons for the Soma Coma Series which originally collected and compiled B sides and album tracks into a very chilled at times ambient series of albums which hat times had a jazz and hip-hop feel as well as downbeat electronica.

How has living in the city of Glasgow and its surrounding environment helped influence the way you create music and Soma’s musical direction?

Well we have been part of a very healthy club, music and party scene in Glasgow since before we even played our first club or made our first track. Also it rains a lot so what else you gonna do with your time but get in the studio!

Over the past 20 years how has technology influenced your methods in discovering talent and producing music?

as for discovering talent it has not really helped – we used to get tapes sent though the post and phone calls for the odd fax, now we get emailed links – but too many to listen to them all and so it would be very easy to miss talent these days .

How have changes in technology influenced your production methods?

We still have all our analogue equipment and midi keyboards in the studio but we use a lot more soft synth’s and software based techniques in the initial process of making and writing tracks. Vector Lovers has just made an entire album using an I Phone which demonstrates the possibilities now.

Is it easier to make and release electronic music now than when you started?

It might be easier to make and release electronic music but it’s not easy to get noticed even if you are one of the people who are making qualitative music – the best thing is to be different and don’t make generic fodder.

What’s your opinion of the current state of music journalism compared to when you first started out?

It seems like a hard career because the mags aren’t paying well – so with less career journos there are more kids writing who might not be that eloquent and also possibly don’t have the knowledge of the history of the subjects they are covering. Hopefully magazines will work out how to get paid for web content whether its through ads or subscribers –

What artists are you currently developing on Soma?

We have a lot of artists coming through both new and established -Gary Beck is about to drop his debut album on soma – its very em and special and he is already a big success story. Many artists release on other labels or maybe their own label too – its quite a free thing – we only put the tracks or albums out that we really  feel are special- Deepchord has now brought his 2nd album to us and Pig&Dan their new album celebrating a decade in the game- newer producers like Kyle Geiger, Rich Jones, Harvey McKay  and Mark Reeve and also Mark Henning who has now released with us for a while and is blossoming- Silicone Soul, like ourselves are making a new album for Soma and we expect a single from Funk d Void anytime soon.

Tell us about the mix you have recorded for us?

We always open up our nights at the sub club with a very chilled first hour – gradually building to somewhere people will start to groove and move closer to the dance floor – the mix we have given to you is the 2nd hour on our recent Return to Mono party at the Sub – this point in time where it’s still warmup but getting into the groove and moving people toward the dance floor. Apart from here and Fabric in London when we get to play for 5 hours from the start – it’s hard to ever play this kind of stuff on tour and it’s a total pleasure of ours – we have always bought deeper music for this purpose and we are glad people that aren’t at the club at the start of the night get a chance to hear it through podcasts such as yours

What advice do you have for producers and those who are setting out to establish their own record label?

Stay true to yourself and find a sound that has a point of difference – something to separate you from the norm or the flock – Have and maintain a high quality control and don’t release everything you produce unless you are completely happy with it. Don’t let the bastards grind you down either!