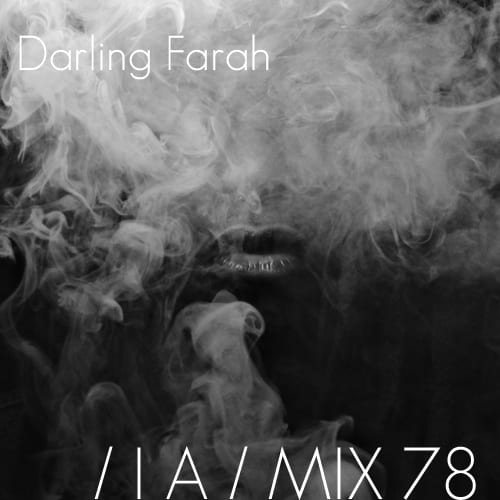 2012 has been a big year for Kamau Baaqi, the Detroit-born, UAE-bred, and now London-based producer who released an astonishing debut album as Darling Farah in July. ‘Body‘, released by Civil Music, offered a mesmerically deep and personal take on techno, house and occasionally ambient music (read the full Inverted Audio take on it here). It built on a set of tantalizing EPs released by the London label which had steadily drawn attention to Baaqi’s dark, wispy strains of electronic smoke, all winding hazily around minimal, dubbed-out elements with a maturity and panache far exceeding his 20 years.

We are delighted to present Darling Farah’s mix of deep, heavy techno from peers and pioneers, old and new, as well as an interview in which the young producer discusses influences, interests, and intentions.

Can you introduce yourself and tell us a little about your music?

My names Kamau and I’m making electronic music with “Darling Farah” as the moniker. I put out an album not too long ago called ‘Body’ too.

Is there a particular sound or overall concept for your IA mix?

The mix is way more straightforward this time with the overall tone generally being a harder sound. I reached out to people whose music I’ve been really into to get some material for it and also looked into the music of people I’ve recently found, or only now discovered. I almost got a little caught up with the idea of concepts and all that before I started this but it was easier to just play music I really like. Old and new.

You seem to be a producer whose history is discussed as much as your music. With the move from Detroit to the UAE and now here, how do you feel London has affected your work?

The location isn’t as big a thing for me as it is for some others as far as how it mixes into my music. London’s affected the way I think about other things but to me it doesn’t affect the music.

Did you find working on your debut LP ‘Body’ to be a worthwhile experience? Do you see the album format as something you’ll continue to pursue or are you more interested in singles at the moment?

Definitely a worthwhile experience. I got to challenge myself on my own terms and just do whatever felt right, and go in all kinds of directions with ideas. When I was making the album I felt like I had this huge canvas to work on. With that said I think there are some songs that work better as singles and since I enjoy doing stuff like that too I’ll probably pursue both.

You seem to have a knack for producing very full, powerful tracks with only a handful of elements. Is this sense of restraint a skill you’ve honed, something you think will define your future output? Are minimalism and reduction traits that you find in a lot of the music you listen to?

I like music that really pulls off minimalism in cool and interesting ways so I end up listening to a good portion of stuff like that. But I can’t really listen to it all the time so naturally I just listen to a lot of styles of music that are the exact opposite of minimal/reduced. I like the really cluttered music too. Maybe I was honing some kind of skill subconsciously because when I learned to make music I was just doing what I think sounded good to me. I wasn’t thinking that far really. So it might evolve in the future as it sort of did in the early stages of my production.

What were your early experiences with music? Have you always had a sense that making music was something you wanted to do?

Not always, before I wanted to make video games. After that I wanted to make visual art and do animation stuff but I ended up spending more time with music as a hobby and I started to like it more once I got more comfortable with the process. Most of my early experiences with music came from the radio stations in Detroit and that was a lot of rap (anything that Just Blaze or Pharell touched was gold). Also I played a lot of Tony Hawks Pro Skater and they usually had cool soundtracks.

Which producers have been particularly influential in the sound you’re putting out today?

People like Actress, Burial, Shed, Daedelus, and Kyle Hall for putting me onto some stuff from a different side of dance music that I wasn’t that familiar with before.

There’s so much going on at the moment in the UK dance scene, who have you been particularly pushing and enjoying recently?

What’s next for Darling Farah? Any releases in the works / nights you’re playing at?

In October I got a new 12” coming. Its gonna have an alternate version of “Aaangel”  and some remixes of other tracks off the album by Jimmy Edgar, Lando Kal and Bambounou. As far as nights, the one coming up is 15th of September at Cargo in London for “RBMA Presents:”. I’m playing my live show there.