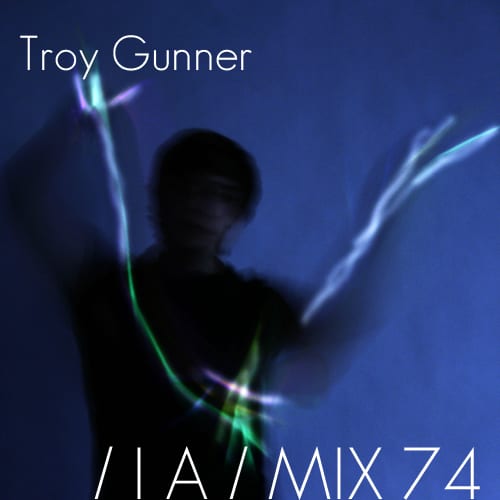 With his debut release at the end of last year on Indigo’s superb Mindset records, which tends to explore the more ambient side of DnB and Bass music, Troy Gunner wowed us with his Fool’s Gold EP. Mixing extensive field samples with snippets of beats and rhythms, his fully-formed sound emerged somewhere in between the exquisite sample-work of Mount Kimbie and Synkro’s darker leanings, and his IA mix explores both these aspects to his style.

On this superb mix Gunner offers a hefty selection of upcoming dubplates from his stable, alongside a taster of his upcoming Headlights EP on Crescent and some tasty new cuts from Synkro, Indigo and My Nu Leng.

My real name is Troy Gunner and I currently DJ and produce under this moniker. I’m from a small village town called Corsham near the city of Bath in the south-west of the UK.

I wanted to be a rock guitarist in a rock band when I was growing up and I used to rock out with my homies.

I grew up listening to metal, then sweaty/jump-up dnb & dubstep music. I then merged into the more humble, experimental and appropriate scene at a young age still, after discovering Synkro’s music. I own a lot of his records back when he used to release loads on Smokin’ Sessions and his self-released imprint. It was from then on I realised my parents used to listen to the likes of Aphex Twin and others like this, and I found some common musical ground and relevance. I’ve always been a self-taught musician and my whole family are a bit musical really.

Ever since playing the guitar from an early age a vibe has always been there in my head and I knew music has been my thing that I want to do until this life comes to an end. I don’t actually take a lot of notice as to how my music goes down in the scene and I don’t really know many names to be honest, only the obvious ones. People can take it as it comes and i’l keep putting out tunes but i’m making music for self-therapeutic purposes. Of course I get the vibes when people say they like it, that’s real nice too and i’m really grateful.

Your tracks are being supported by influential artists in electronic music sphere’s including the likes of Indigo, Synkro and the Mindset camp. How did this relationship come about and do you think it has helped your music come to prominence?

A mixture of a friend that lives with Indigo, in conjunction with the internet. Some people supported my tunes in Manchester (the mindset release before it was released) and then I guess Liam (Indigo) and Joe (Synkro) caught on from there. They put me on ‘the map’ so to speak, gave me my first vinyl release and got my music to the likes of Gilles Peterson on Radio 1. I owe a lot to them. They’ll always be up there with some of my main influences not only in music but in life and their attitude to the scene is overlooked by many unfortunately, just because they don’t live in London and ride the ‘contagious hype’ wave as they keep putting out ridiculous release after release on Mindset, my favourite label at the moment. A lot of people need to wake up a bit and listen, because with the internet at our disposal it’s no longer about location.

In what direction do you see your music taking as you mature as an artist?

I’d really like to approach a live set of some form, relatively soon but still DJing on the side of it when the time comes. Whether this is with a band or just by myself first, I don’t know just yet but there’s a lot that can be done with electronic music when seen in retrospect. I’m always experimenting and moving different places with sonics.

There is a diversity in your release schedule thus far, heavily melodic music with a peculiar and captivating palate of sounds. Could you discuss your creative process?

I’m still finding myself musically and i’m not even getting started with what I want to fully achieve yet. I no doubt enjoy making the sound I have now, but everything changes so I may not be making what I do now in a year’s time or so. Life is a dynamic sequence of events; who knows what’s going to happen tomorrow?

I have some different stuff from different tempos coming out at the end of the year and then some more stuff pencilled in at the beginning of the next. I’m just trying to staple my sound to any tempo really and focus on making electronic music without the drama of determining picky sub-genres.

It’s a collection of music i’m listening to at the moment, mostly unsigned or forthcoming. Some never before heard material in there from myself and the artists i’m mostly feeling at the moment (it’s so hard to fit it all in to one hour, there are too many people making good music at the moment). I get sent a volume of good music and I also back the producers who are lesser known and just pushing vibes because they enjoy building art. I give critique to those who want it and back anyone from anywhere, it’s all positivity. Send me tunes and I listen because I usually have the time now i’ve finished college and I have my head down. Put the egos aside, this isn’t pop music. Not to mention I do a bit of A&R for Mindset here and there…

Guitar, some crazy ancient percussion my parents brought back from different places in the world and anything else percussive that intrigues me, even if it means using my mouth in some way to make a sound. Weird stuff excites me and I think it’s just because I get bored quite easily in life and in music. I want to make sound I haven’t heard before.

In terms of software, I still use Reason but I dabble in Ableton too. I’m knowledgable in Logic from a music tech course but I find it a bit tricky to work in at the moment so i can’t get as creative or move as fast as I want to in other DAWs.

If you could only keep three albums what would they be?

Where do you see your musical persuasions taking you? Any projects, collaborations, live shows or parties we should know about?

In terms of gigs I got back from playing in Katowice a few weekends ago and have done some really memorable shows this year. My bookings are down the side of my soundcloud, that’s where you can find out where to find me if you want to come say hello.

I just finished off a heap of remixes for different labels including Smokin’ Sessions and Infinite Machine. I just had a remix out I did for Gang Colours out on Gilles Peterson’s Brownswood imprint and i’ve got my next EP out on The Crescent very very soon which i’m real excited about (the title track is in the mix). My to-do list is rammed again and i’ve taken on an EP project with a beautiful vocalist, Zelda Marshall. We don’t know or don’t care where it will come out if it does. It’s a statement, just making music for fun – how it should be. We don’t want it to be a forced process.

There’s personal expansion for me every time I make something new and I just love creation. The thought of making something out of nothing that can potentially provoke the thoughts of a mass of people. Everyone should try doing this in my opinion, it’s so healthy for the mind to be creative whether it’s in music or any other artform. It’d probably make the world a better place.

Could we have an insight into what your listening to at the moment?

I’m getting fully back in to the stuff I was brought up on as a child, mainly Erykah Badu at the moment though. I can’t stop listening to Wes Montgomery, The Roots, J Dilla, the list goes on and i’m heavily influenced by so many different things from different avenues of my life thus far. I think it’s important to listen to as much of a range of stuff as possible in order to gain some perspective of where you are etc, not just musically.

In terms of up and coming artists I’m listening a lot to at the moment, I don’t joke when i say that there are artists in the mix whose ages are as low as 14, making industry standard music.

Happa, Endlines, Kyogi – this is the music of the future. Look at my friend Karma Kid now playing on the same stages as Annie Mac et. al, he’s only just turned 18 and yet my mum knows his name through Radio 1. Not a lot of people see it but I think it’s integral to back the sound of the future, the younger generation (support all sound, age is just a number). Otherwise, sit back and watch them fly past you.

Food is my secondary hobby. Growing, cooking and eating food. A lot of musicians are food lovers I believe, and vice versa. Look at all the famous chefs on TV and you’ll soon realise that most of them are musicians. I think maybe they both use a similar part of the brain in terms of their creativity process and finesse. I have weird theories and draw parallels between the two; how salt and pepper can be used as high and low shelving EQ and cooking is compression that flattens out the palette, amalgamating all the elements. The presentation of the meal is mastering. What am I saying. I have a lot of time on my hands…

Be open minded in life to one and all. It sounds vague and it’s not hippy stuff, it’s real life. There’s nothing more important and this rule applies to anything ever. If the majority of the population weren’t so single minded there’d be no war, clash or conflict in regards to anything in life. It’s against nature to be a bad person, you pick that up somewhere along the life road.