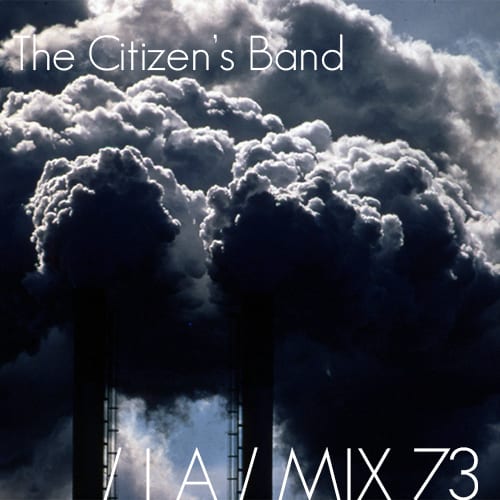 The Citizen’s Band is the solo project of Christian Beißwenger who also produces as CB Funk and is also one half of Arto Mwambe. Inspired by the sounds of Roman Flügel and Massimiliano Pagliara, the Frankfurt-based producer is currently releasing records through Live At Robert Johnson.

Having previously reviewed ‘West 42nd/77 Reasons‘ and ‘Broken Rome‘ we asked Christian to record a mix for the Inverted Audio mix series and answer a few questions to find out more about him. We question him on his solo project and how it differs to the sound of Arto Mwambe. We ask him about his working relationship with Live At Robert Johnson and his collaboration with Robag Wruhme for the track ‘Ende’ on the ‘Thora Vukk‘ album. He also gives his opinion on releasing records self sufficiently and his current approach to production. Christian’s mix has a distinct house vibe, featuring tracks by Marcellus Pittman, Aera, George Fitzgerald, Dusky, Lowtec and many more.

Can you please introduce yourself and tell us what The Citizen’s Band is currently up to?

My name is Chris Beisswenger, I’m a Frankfurt-born, New York City-raised guy making music for the better part of the last 15 years, often in groups, such as High Tide, Arto Mwambe, The Exile Missile and more, but also solo as CB Funk and currently The Citizen’s Band.

What’s the story behind the name ‘The Citizen’s Band’ – how did you come up with the name?

It’s actually just the abbreviation of my initials, spread out over a three word name no one I’ve met has managed to pronounce correctly until to date. I like changing names, causing much confusion with my friends and potential business-partners.

What’s your background with electronic music? Which producers have been influential in the development of your personal music taste as well as your current approach to production?

I started into electronic music with the early WARP stuff, coming from RAP and hiphop. Like Nightmares on Wax, Tricky Disco, LFO, AI…all soon to be overshadowed by Aphex Twin, Autechre, Plaid and of course Two Lone Swordsmen. Then, being in Frankfurt in the 90s you were obviously exposed to what was going on at Sven Väth’s OMEN and at Ata’s Wildpitch Party. Finally, the opening of Robert Johnson was the lead to an ocean of new sounds. Lately, I’m coming back to ambient music, probably because of my age and my modular synth, which has changed the way I produce massively.

You also make up one half of Arto Mwambe – Please explain how you met Phillip Lauer and what your approach is with the project?

I met Phillip through Peter Armster, a long standing A&R for various labels and distribution companies and at the time, maybe sometime around 2000 owner of Punkt Music (R.I.P.) They both worked at Intergroove and Peter thought we should do some music together. So both being fed up with the minimal-hype surrounding us at that time, we went to his former bands rehearsal room, recorded some really shitty sounding drums and did the “Girl you know it’s Arto Mwambé” Record, Punkt 022.

In your view how does the Arto Mwambe sound differ to that of The Citizen’s Band?

Arto Mwambe is much more centered on our interaction as our tracks usually get jammed together over a couple of hours and then we cut the parts down, edit and re-arrange them again, play something over it once more and so on. T.C.B., being just my modular synth and me is more experimental and probably darker in ambience.

So far you’ve released three records, two on Live At Robert Johnson and the first on Story. What qualities do you look for in a label and what determined your decision to release on these two imprints?

Robert Johnson was a more than obvious choice, me being friends with everybody working there for a quite long time now. Also being a resident at the club, cooking at Ata’s Club Michel, and Oliver always has a em opinion. I like people with em opinions. The Story record was actually a follow-up to a the very first on the label by myself as CB Funk. I know those guys for ages too, so it’s all family decisions, I guess.

We all know it isn’t as easy running a vinyl label nowadays as back some 10 to 15 years. I know of some Mexican guys who sell 1000 tracks from their webpage “as they play” at some bizarre beach party. All thanks to smartphones. Obviously, this isn’t everyone’s ideal.

How do you go about creating music? What environments do you prefer to create in, what equipment do you employ (analogue vs software) and what mindsets do you focus better in?

I work very slow, I wiggle around constantly, but really take my time in laying it all out. I like making the music, carving out details, getting all my gear to talk to each other in the right language, with the right slang and vocabulary. Then I might record something, not necessarily. I’m more into the creative process than into the thought of needing a finished product. It’s also because of the modular system I’m using, as it needs time to figure out what you want from the patch and how you’re going to use the interaction. It’s plenty of fun, but also very time consuming.

According to Discogs you provided vocals for Robag Wruhme’s track Ende on his album ‘Thora Vukk’ – how did you come to work with Robag and how did you go about creating those vocals?

Yes, that came to me sort of by coincidence, as Gabor is a close friend to Sebastian Kahrs, who’s also Ata’s partner running the Robert Johnson club. I sometimes take Sebastian’s dog, Dorle when he’s out to host people, and one day he came with this song on a CD and said he needed to record some vocals at my studio. So we gathered more people and just randomly recorded, even Dorle, who is also mentioned at Discogs, along with my girlfriend, Ata, Sebastian and a couple more.

What does the future hold for The Citizens Band? Can we look forward to an album in the near future? If so how do you envisage your approach to the album, both creating it and its end result?

You wish, haha! Well yeah, the idea for an album exists, but in reality I’m just a very slow working chap, so there’s no “in the near future”, although with a little pressure, things work out quicker than one thinks…

Your last two releases on Live At Robert Johnson both feature excellent artwork. Who’s behind these designs and what part did you play in their designs?

All LARJ artwork is done by the beautiful and talented duo Sandra Doeller and Michael Satter. They have also been heavily involved in the layout, editing and production of the Robert Johnson Book, “Come into my kitchen” and for various design-based projects surrounding the Robert Johnson crew, such as the Plank! Bar, Club Michel etc. You should check out their website.

What’s your opinion on music journalism in such a rapidly shifting musical landscape? What do you like/hate? In the past six months what have been your top 10 releases and producers?

Music journalism may just be the last community-aspect left in the music industry. Where else, apart from the ever-shrinking number of record shops can one talk/hear/read about music from likeminded people. It’s out of question that tastes differ and everyone’s got their own darling and hate-object, but that’s what it’s all about in the first place: communication. Sure, we can all scroll through Facebook, forums, YouTube and the like, but I enjoy reading, especially whole sentences, not just headlines.

That being said, I have been extremely un-attentive of music during the past six months. I can only say I really dig Marcellus Pittman’s last offering, Jimmy Edgar’s making some nice stuff and a lot of truly talented modular geekery has travelled through my ears via Soundcloud. And I’m generally a fan of Roman Flügel, ha.