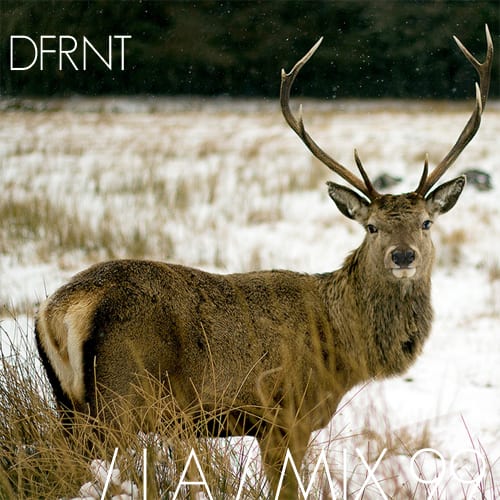 DFRNT is the moniker of Alex Cowles who heads up Echodub Records and net label Cut. In 2012 Alex released his second album ‘Fading‘ via Echodub in which he flawlessly demonstrated his affinity to dub techno, reminiscing the sounds of Basic Channel, whilst also submerging elements of bass, jungle and garage in swells of dub techno reverb. On the cusp of releasing his next record, ‘Nobody Stop Me’ EP via FINA records, we interviewed Alex about dub techno, running two record labels as well his approach to artwork.

Can you please introduce yourself and tell us what you’ve been up to over the past couple of months?

Hey, my name’s Alex, and I produce and DJ as DFRNT. The past couple of months have been interesting. I’ve produced a fairly ambient track for my brother’s documentary project, and I’ve been working on one or two new pieces. Most importantly though I’ve been gearing up for a new EP release on FINA which is a 5-track digital and 4-track vinyl release of largely house vibes.

Tell us about your mix?

I think a lot of people try and cram in as much pre-release, and up-coming tracks in to their mixes as they can – I often do this myself, since I like to keep it fresh for both my audience and myself.

This time I was concentrating more on the vibe. I wanted to bridge some of the real deep, patient electronic dub-techno styled stuff I have and some of the techno I’ve been feeling – as well as some of the more tech-based deep dubstep stuff. All themed around this sort of open, expansive metallic, deep sound. Almost quite a Wintery feel to a lot of it – something I really relate to. Sounds that inspire me.

Because of that reasoning and theme I re-visited some older tracks, some stuff I’ve really been enjoying going back and picking up – along side some of the newer stuff I have.

What’s the story behind your name DFRNT?

Way back when there was just MSTRKFT working without vowels I quite liked the aesthetic of the name. I wanted something new and I couldn’t use “Alex C” since that was a German trance producer. I didn’t think at the time that my productions would indeed end up being ‘different’ in too many ways to other people, and I also didn’t foresee a huge influx of people using the no-vowels thing, so it was a regrettable choice in retrospect – but I guess I have to stick with it now. I may change it one day and start fresh, but who knows…

You run two record labels ‘Echodub’ and ‘Cut’. What’s the reasoning behind setting up two outlets, why not just focus on the one? What does each label offer and how do they differ?

Echodub was the first and started as a collective. Although we put out free releases – I have tried to focus it more on paid-for releases now, a more traditional label model. My latest album and EP were our first physical releases and I’d like to do more in future when I have the budget.

Cut was started as a net label to provide exclusively free music on a pay-what-you-want model and I felt like there was a gap in the market for that – free music presented and treated properly, not just slung up on Soundcloud for downloading or on Mediafire or Sendspace for people to grab and rename etc. Treated properly I think people give the music more value – value that it deserves.

Have you always been into deep atmospheric dub techno? Who was responsible for getting you into the sound?

Probably Andy Stott and Quantec – who I discovered around about the same time. From there I looked in to finding more dub-techno stuff and managed to discover all the work from Basic Channel etc. It’s just been a big discovery since – every so often I find a new incredible dub-techno artist and start hunting for all their work. I love immersing myself in it. It’s very therapeutic. It’s been a good few years now that I’ve been in to the sound – and I don’t see my love for it waning in any respect yet!

In 2012 you released your album ‘Fading’ via Echodub – How do you feel the electronic music media and community received your album?

Honestly? I think it went largely unnoticed. I almost called it “Fading: A Futile Endeavour”. It’s hard not to be bitter about it when you pile so much time and effort into a product only to find that a handful of CDs sold and even on a small run of vinyl is not even close to selling out. I expected more I guess – but what can you do? Promo went pretty well, people’s feedback is always great – but getting people to hear it in the first place – that’s the real challenge. Nightmarish in fact.

How do you respond to people reviewing your records? Are you influenced by what people say?

Nope. I don’t produce for the reviewers. It’s hard to say that it doesn’t cross my mind, but it’s important to produce for yourself, as opposed to other people. When the personality of the producer comes through and it loses that cookie-cutter edge – that’s when the real music and the real emotion comes out. That’s what I strive for a little more than just trying to please the reviewers.

That said, most that review my stuff do it positively – so I largely don’t have many complaints in that department.

Which musicians and albums would you say are essential to the development to your personal musical taster?

I love listening to what 2562 / A Made Up Sound puts out – he tends to surprise me with the way he pushes boundaries. I love that. I’m always interested to hear Scuba’s output and a host of producers from Manchester always inspire me – Synkro, Indigo, Akkord etc. I tend to get a lot from unsigned producers also – those who have great ideas that often don’t get to see the light of day. It’s criminal that they go un-noticed, but when you discover these hidden gems, it can be a catalyst for some crazy brand new idea and I love the way that can happen!

Tell us about your studio setup and how you go about writing tracks?

I work on a laptop right now. I have studio monitors and a decent sub, but might have to switch to headphones for a bit, since I’m going to be moving about a little in the next few months.

From a track-writing point of view, they can start in a huge variety of different ways. It used to be that I’d always start with synths and build it out from there, but often now I get ideas for a drum pattern or a bass lick, and I’ll create that and just build a track out from there.

What people tend to find odd is that I build loops in clip-view in Ableton – I just get everything set like a live-setup and then I record it in to timeline view in real-time, then go into timeline view and start tweaking and adding bits and bobs. Other producers tend to think it’s a bit odd – but it works for me. I love the way Ableton has that flexibility.

In what environments or even states of mind do you prefer to create music in?

For states of mind, It’s always emotional – whether love or hate – both induce different types of sounds I guess – environmentally I love a good view, but regardless any sort of change of scenery tends to spur different creative ideas, so even without a view, a different room, desk, chair, lamp or apartment can make a difference to the way I feel and the way I create tracks.

Are there any breakthrough producers that we should know about in Edinburgh?

Edinburgh has a small handful of people producing, but I don’t actually keep up to date very well with local producers, it seems that there’s a relative lack of community surrounding producers in Edinburgh – or the fact that there are so few, means we find less points to overlap and use as common ground for basing communication on.

What releases and artists are you currently developing on Echodub?

I’ve been sitting on an incredible album of work by a Mexican producer called Mekha – I’d like to put it out soon, but have been finding difficult juggling personal, professional and musical sides of my life. Time has been tight, so it will happen soon, but I don’t know exactly when.

Who’s behind Echodub’s artwork? You seem to have adoration for deer’s and stags, what’s the fascination?

I do all the artwork for both my labels – Echodub isn’t particularly about stags – but DFRNT is. I started using it as an emblem for my musical stuff because I wanted something “Scottish” but not overly so. So thistles and the flag and bagpipes etc were out – but deer/stags seemed to fit – so I use that as a theme for the DFRNT artwork. It’s just crept on to Echodub recently since our last release was my album and EP.

Do you have any records coming out soon? If so please us about them and how long you’ve been working on it for.

The FINA EP mentioned earlier is my only scheduled release so far this year. FINA approached me to do a remix initially and then when that opportunity disappeared we ended up chatting further and an EP grew out of a few tracks I sent over for consideration. The EP is called “Nobody Stop Me” and it’s due out very soon!

Haha, at this stage in my life, if people knew about my impulsive decisions, I doubt they’d take any advice from me! I often give people musical advice about sitting on their tracks till they’re absolutely sure they want to release things – but actually I’d rather say this:

If you feel a desire to do something, whether it’s starting a business, putting a record out, moving abroad, quitting your job and going freelance, or whatever – DO IT. Stop wasting your time and get on with it. The world is changing, and the way people work is changing. Do something radical, because nothing exciting or challenging EVER happened inside your comfort zone.