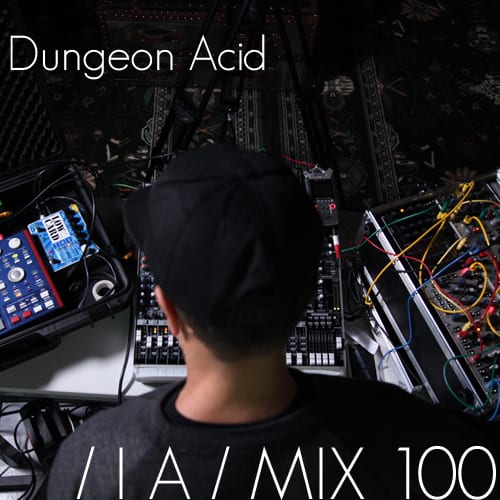 Commemorating our 100th mix and 5 years of Inverted Audio we’re proud to present the first of a new series of specially recorded 100% live performances called IA Sessions. In February we met up with Swedish electronic techno producer Dungeon Acid in London and invited him down to the Radiumphonic lab to perform a completely one off live analog techno performance for us only. We recorded the audio and took some photos for you to see what happened.

Dungeon Acid can you please introduce yourself and tell us what you’ve been up to since you recorded this exclusive Inverted Audio Session in London?

Hello my name is Jean-Louis Huhta. I live in Stockholm. I am a father and make sounds and stuff.

Since this recording was made I’ve spent the past two months in LA together with my girlfriend who was there on behalf of a film stipend. We had a great time there exploring the scene and making some new friends and meeting some old ones. I skated a little and made some recordings with friends. I was planning on going to Detroit as well but couldn’t make it there this time.

Before going to LA we recorded a new album with our band The Skull Defekts, for due release on Thrill Jockey Records.

I made a Dungeon Acid room in a group show “I want to hold your hand” at The Borås Art Museum. The Exhibition celebrates 50 years of POP music in Sweden. It’s a great show with lots of photos, old records, fanzines and art going through all different genres from 1968.

At this moment I am doing a workshop at an art school in Brunnsvik. I’ve been here for a week teaching how to do a soundwalk, jamming with synthesizers and watching movies. It’s great fun and a fantastic school that will unfortunately be shut down soon.

Did you have a preconceived theme before playing this performance or was it a random live jam?

Well you could say the theme was the patterns that were in the machines made for the gig I did at the Xenoglossy party previously.

It always changes, I never do a set list, usually I start with a prerecorded intro to set the mood and lead me into the pool of sequences. From there on I’ll build the set and move about freely as I choose. I play the machines and the machines play me. It’s about being in the ZONE.

Can you tell us about the equipment you used to create this live session?

MPC 1000, Bass Bot TT 303, Electro-Harmonix Hazarai. A-100 Eurorack modular synthesizer case with mostly MakeNoise Eurorack modules and some other stuff. I am now in the process of switching from the MPC 1000  to a Octatrack machine.

You played purely live, no laptop, just analog machines. Have you always been into using analog gear? If so, why?

I started buying analog equipment years ago. I have always had a fascination for machines since I was a kid. I got my first mac with a soundcard and sound designer in the early nineties, then eventually moved to just working in a computer environment. Exploring the possibilities of performance and live improvisation with just a computer mixer and a soundcard. It was fun and inspiring, but got boring after a while, so after a long period of that I started using my machines again.

So for Dungeon Acid it’s just hardware no arrangements, no after treatments apart from mastering. What you hear on the record is what went down and basically how it sounds live if the sound is good. That’s how I used to record when I started doing Techno. Record straight to DAT then edit it.

How long have you been producing as Dungeon Acid? Can you tell us about your musical heritage, previous production?

My musical heritage is based on everything that has influenced me in my life.

My parents record collection and the punk years in Gothenburg. The years with the people at Radium 226.05 (Radium was a gallery that later became a record label run by Ulrich Hillebrand, Carl Michael Von Hausswolff and Erik Pauser. They brought William S Burroughs to Sweden to read and show the films “Cut Up” and “Towers Open fire”. I was in a band called Cortex we played after screening).

Dungeon Acid has been going since 2009. Previous projects and bands through the years have included Cortex, Anti-Cimex, Texas Instruments, The Stone Funkers, Lucky People Center. Brommage Dub, Ocsid. 413, Dr. Nobody, Kozmic Niggah and some others.

Dungeon is a metaphor for the subconscious, breaking the chain or connecting the chain, to move on several levels, being in the present like skateboarding or aikido. Vibration, movement, communication, empowerment, heat, eroticism, physicality, decoding ancient rhythms, taking control, loosing control, the unseen, traveling, in time, trying to understand, the love of rhythm of sound and noise, celebrating acid music and Detroit techno, looking back and moving forward in time and space. Ad infinitum

What music did you grow up listening to and what records would you say define your childhood?

Stevie Wonder, Nina Simone and so forth. My parents had a huge record collection, when I was a kid I used to zone out for hours listening to records with headphones on.

Kiss was the first band I became a fan of, later when I started skateboarding I discovered DEVO through Skateboarder magazine. I became totally fascinated by the world of DEVO. In the 80’s I got into punk and Industrial music, dub and early tape and computer music.

Some records that were on heavy rotation in my childhood:

Buzzcocks  “A Different Kind Of Tension”

You studied at the Stockholm Academy of Dramatic Arts – What attracted you to study at STDH and can you tell us about your experience at the academy, what key things did you learn from studying there?

I am autodidactic so the possibility to go to school was cool to be able to do at this point in my life. It was an opportunity for me to focus on projects and ideas I’ve wanted to do, there were a lot of inspiring lectures by different artists.

I’m currently working on a project, which enables me to make sound and graphics while skateboarding. May 24 and 25 will be the premiere of that project at the music museum in Stockholm.

In the near future I could come to London and skate the sinewaves!

You currently live in Stockholm. What’s the electronic music scene like in Sweden, how often do you get to play your music out and experience other types of music in Sweden?

The electronic music scene in Sweden is strong, a lot of people organise great concerts and events. I play now and then and DJ sometimes in local bars and one-off parties and such.

We also have EMS, which is the electronic music studio in Stockholm, a great place to record electronic and electroacoustic music.

There are some great record shops and music equipment shops and distributors. A lot of people are into being creative musically which is good.

We need more freer venues for people to do gigs and stuff. There is too much control at present.

Who/what is responsible for getting you interested in producing techno?

I believe I have always liked techno. Everything is connected from always being interested in electronic music, different and unusual sound textures and machine like rhythms.

Long chains of events have led to this. Emrik the singer of Stone Funkers played me a tape around 88-89 called “Techno! The New Dance Sound Of Detroit” it was so funky.

Later we did a show in Copenhagen in a jazz club. Underground Resistance had played in the city as well. They came and checked us out backstage; they were into the Moog synths and stuff.

That was the first time I met Mike Banks. When I started DJ’ing in the late 80’s I was spinning mostly hip-hop, GO-GO music and funk in our club Lucky People Center.

Later when I moved to Stockholm I started buying gear and tinkering by myself and continued DJ’ing but focused more on Detroit techno.

Andrew Diey and a mate of his opened a record shop called Surface Elements focusing on Techno. There was also Pitch Records and later Planet Rhythm. Cari Lekebusch had his studio in the basement of Planet Rhythm. He had just started his own imprint called Hybrid and he put out my first record together with Simon Hartley. It was an electro track “Get Your Ass To Mars” it was a long track with samples from Bladerunner and Total Recall.

Do you have a personal philosophy on sound?

I feel there is no end to creation and this is something that I enjoy doing, this is what I have always wanted to do and probably will do for the rest of my life in some way or another. The world of sound is vast. There’s so much to do and explore. Just keep doing it man. Don’t stop till you drop.

I heard you used to have live cockroaches in your bedroom. Tell me about that?

This was in the 90’s Brommage Collective days. We lived in a big house with a studio in the basement. Simon Hartley whom I had some projects with lived there as well.

An artist friend of mine named Henrik Håkansson whose work usually centers around animals, insect, plants and science, had a whole aquarium filled with them for an installation.

I took care of them for a while. When it got dark they become quite active It was fascinating and a bit scary at the same time. I had nightmares of them escaping and taking over the house. Later they were driven to Germany for a show, but the trip was too cold for them and  not many made it to the show.

What environments do you prefer to write tracks in?

Mostly I work in my studio or I will bring some equipment home and work there. Sometimes I go to EMS which is the Electronic music studio in Stockholm they have a huge Buchla and Serge modular system.

Where are the strangest places you’ve played at?

It was probably in the Russian Ural Mountains. In a small room it was like an après-ski place. Kids sat and played board games and drank tea while I banged away in the corner. There were also a group of Swedish language students there. Their Swedish was excellent.

I still skateboard and do aikido now and then. I like taking pictures, filming and reading books, I guess those are my hobbies. I want to get into surfing its been a dream of mine since I was 10. I have to ride the waves before I leave this world.

Do you have any records coming out this year? If so please tell us about them and how long you’ve been working on it for.

I just released a Dungeon Acid record on my label Huhta Home Studio. There is one coming soon on Fit recordings. An album and a split record with Russell Haswell coming soon iDeal Recordings and one on a new German label called Zodiac.