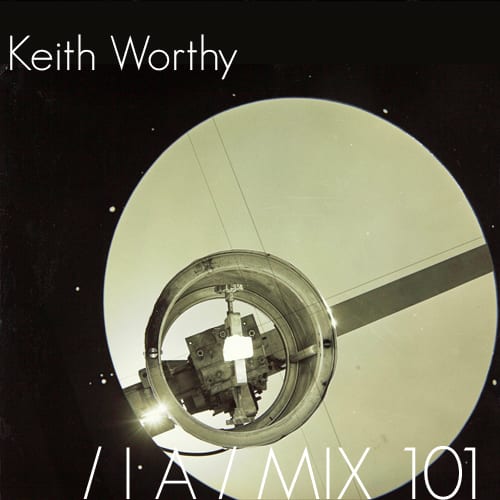 While not always making as much noise as his Motor City compatriots, Keith Worthy has, be it in his guise of DJ, producer or label boss, rightfully held the respect of electronic music fans and figureheads since his early days in East Detroit. His DJ career may stretch back significantly further than his relatively young list of production credits, but his deep, smooth, and often intricately unusual tracks have been garnering praise since they began appearing in 2007. Ahead of his debut album, “The $ Of Non-Conformance“, Keith sat down with Inverted Audio to give us his thoughts on DJing, Detroit and production.

For those who may not know, could you introduce yourself and tell us what you’ve been up to recently?

DJ/Producer and owner of Aesthetic Audio, which is based in Detroit, MI.  As of late my focus has been to grow the Aesthetic Audio brand & sound by continuing to introduce quality sound to the genre.

You seem interested in avoiding conceptions of artists and labels, even suggesting that you try not to look at names on records – how do you prefer to think of music?

It’s certainly not intentional; my point is that the most important thing to me is to keep the focus on the music instead riding a ‘media hype style bandwagon’. For instance, ‘DJ so and so’ puts out a record, and regardless that the record is trash, the media positions it as the best thing since sliced bread, and then the masses ride the bandwagon … it’s sad actually, but again that’s just my opinion.

How do you organise the concept of this record or that without knowledge of its background?

At some point, everyone in this industry is new at it, so names aside, if the music is good and it moves you, then the mission is accomplished. If it’s a quality piece or a nice DJ tool; then it’s automatically in my mental rolodex.

You were a well-known DJ for many years before you started to release your own music. Nowadays it’s rare for DJs to be widely noted without some original productions – what effect do you feel this has on electronic music?

There are some DJs that play quite a bit and do not have their own original productions, some play because they are talented, and some because of media hype, but what confuses me is how so many producers who are not skilled selectors are booked to DJ events just because they have a record out?  This has always confused me. Shouldn’t a big part of DJing gigs be determined by whether or not you rock a party?

Can you describe your creative process when you’re producing?

Personally, it varies for me; sometimes it takes me just to be relaxed, in a good mental space along with good energy flowing, and other times it takes just the opposite for more aggressive tracks.

How does it relate to the way you structure emotions and moods in your sets?

For me, it is all about the people. I love to play a room when people’s energy is on high and they are ready to dance, and it’s easy for me to be free and let everything go. It’s a natural high for me to give them what they came for out of my appreciation.

Let’s talk about your mix – did you have anything specific in mind when you were recording it?

The main objective is to make sure that it resonates with the dancers and music fans and that’s all that I could ever ask for.

Can you tell us a bit about the artists you featured?

There’s new unreleased music from Aesthetic Audio, and a mix of Detroit, Chicago and European based artists’ music in the set. Whenever I play I like to use the various elements to create the movement, and to tell a story in a set.

You’ve talked lots about Detroit talent, are there any artists at the moment that you’re really into?

I support everyone from the D, and anyone abroad who is dropping science…diversity in music is critical to sustaining the culture.

How important is the city for you in terms of early influence?

My early influences in the D are certainly a part of who I am now, but even though it’s in my DNA, I like to think that I am constantly growing both as a person and as an artist, so I stay open to everything, life, new experiences, and people can always influence me.

What do you think about producers from elsewhere in the world who seem to align themselves with certain aspects of Detroit’s many distinctive sounds?

I think of it mostly as a compliment, and I certainly do get it, but sometimes it can be a bit weird at times …

Can we ask about your production set up? Do you have any analogue/digital preference (or anything to add to the debate)?

My studio is a bit of mix of analog and digital pieces.  I know that allot of people love to talk about equipment, and I understand, but equipment is only the vehicle that is used to articulate what is already conceived in your mind and in your soul…a sequencer can only do so much.

Anybody else you’re listening to/playing out a lot at the moment?

This is really quite a long list (too many names here) … I have a lot of respect for the artists who came before us, and 90’s house and techno was some of the best and most creative music ever in my opinion, and I still listen to allot of the older stuff, but as far as playing out, I’m definitely about exploring new boundaries and taking the dancer floor on a new journey …

Do you find any particular producers to be a significant influence on your music? Or even themes/ideas?

For me … in the dance genre it was Larry Heard, Little Louis, Frankie Knuckles, Kevin, Juan, Derrick, Blake Baxter, Pepe Bradock, Kenny & Theo, Tony Humphries, M.A.W. , Jovann, DJ Gregory, Glenn Underground, and far too many others to name, but I got into this music by going out as a dancer and these are a few of the peeps that got me into it.