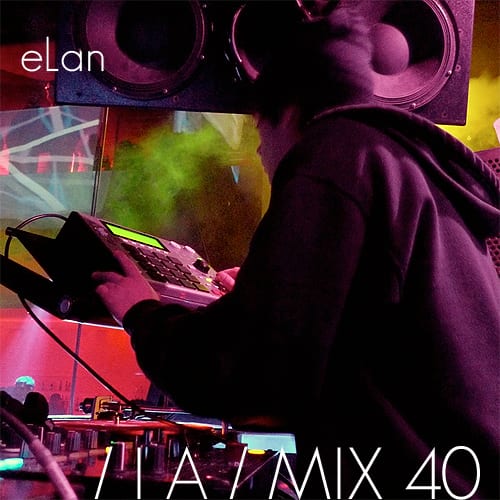 When Modeselektor got introduced to the music of eLan, they immediately fell for his beat-smith mastery, it resulted in him being welcomed to Monkeytown Records and their sister label 50 Weapons. In 2010 eLan released a split 10″ with Falty DL, ‘I Can’t Breathe’ immediately capturing the ears of those inclined to the hazy beats of Flying Lotus and the Brainfeeder camp, prompting this description from Bleep, “eLan is a brand new name to most, he makes ultra-slick, mournful Dilla bump sound oh-so easy.”

eLan is now dropping his new album ‘Next2Last‘, a double-disc collection of originals by eLan and remixes of his productions from the likes of Modeselektor, Cosmin TRG, Lazer Sword, and more. The record follows three previous EPs on Monkeytown’s sister imprint, 50Weapons, and is out today. We took the opportunity to find out more about the man behind the music, his new album and his musical heritage. eLan’s mix features tracks from himself as well as Devonwho, Rustie, Shlohmo, How To Dress Well, Jonwayne and many more.

Please can you introduce yourself and tell us where you’re from and what you’re currently up to?

Hello, my name is Elan and I make beats.  I’m originally from Los Angeles, but for the last couple years I’ve been living about two hours south in San Diego.  I just wrapped up a slew of releases for Monkeytown Records and I’m heading out on a little European tour.

Before you started producing music what did you do?

I’ve been producing music since I was 16 years old.  I guess I started getting a little more serious about it (or at least dedicated more time to it) after I finished college a couple years ago.

What are your musical roots? – What music did you grow up surrounded by and what producers and albums were you listening to in your early teens and how did your musical taste progress?

I grew up in a pretty musical house.  My Mom plays all sorts of different instruments like the Hammer Dulcimer, Accordion and Recorder.  I played piano for years,  I was one of those kids who had his headphones on all day, every day.  I saved up my allowance for months to buy a portable CD player in 5th grade.  It wasn’t long before I realized that CDs were pretty expensive, and MP3s weren’t around yet, so I switched back to my cassette player and recorded songs off the radio.

I started getting really into hip hop and rap music as an early teen.  My favourite songs were usually west coast, G-Funk and a lot of underground stuff, but I listened to it all.  Basically whatever had a dope beat.  I was really into making sample-based rap beats for years, I loved going through my Dad’s records to find that perfect loop.  I was heavily influenced by producers like Alchemist, DJ Premier, Hi Tek, Dr Dre.

When did you start discovering and listening to European electronic music? What producers really stood out to you?

I was listening to electronic music from a young age.  My Dad had a pretty vast music collection. I would go through his records and listen to stuff like Kraftwerk, Tangerine Dream, Alan Parsons Project, even Enya haha.  Say what you will about her but she was a pretty talented producer.  I always listened to a variety of music, playing Aphex Twin and Venetian Snares alongside Kurupt and Binary Star.  Later on when I was in college some of my roommates got me into electro and house a bit. I really liked that funky, soulful sound that a lot of the French artists explored.  Daft Punk, Alan Braxe, Fred Falke, Break Bot, Digitalism, Mr Oizo, the Field were all favorites.

When did you realize a transmission from simply experimenting with music to actually recording it? – Was there a sudden eureka moment?

Well I’ve always recorded my music and more often than not, it’s an experiment.  I still have the first beats I made in 2002 on an old hard drive somewhere. I think I even have a piece I wrote for piano when I was 10 years old buried in my closet back home.  I decided to release my first beat tape in 2009.  Before that I would just show my beats to friends.  I don’t know if there was ever a eureka moment, I guess I just felt like I was ready and wanted to get my name out there a bit.

Would you say you’ve embodied / captured anything from your surrounding environment within your music?

Whatever is happening in my life makes it into my music in one way or another.  Sometimes I’ll take my recorder out on walks around town and listen to the outside world through headphones.  I don’t really incorporate the actual recordings in my music, but just listening to the environment, myself, my foot steps compressed down to 2 channels lets you hear things in a different way.  Organic rhythms.  Whatever music I’m listening to at the time definitely has an effect on what I create too.

You’re part of the WEDIDIT Collective, made up of Shlomo, Juj, Joseph, Ground Is Lava, NonEpic, Zeroh, Jonwayne, D33J, Melonious Drunk, Dr. Blount and RL Grime. – Clearly you all share the same passion for music. So how / when did the collective come about, what is the purpose of it and what are your future aspirations for it?

I don’t even know how the collective initially started, but I linked up with them when Shlohmo reached out to me a couple years ago.  Wedidit is all about coming together as like-minded artists who are good at what we do.  I hope in the future we get to play more shows together. I also think it would be really cool to work on a project as a group, Living Legends style.

What does being part of the 50 Weapons and Monkeytown family mean to you?

It means I have a platform to share my music with people who probably would never hear it otherwise.  Hopefully I can help the label grow as much as they help me spread my music.  It’s an honour to be included amongst such talented artists.

2011 has seen you release three EP’s;‘Fuzzy Numbers’, ‘Aligator Snaps’ and ‘Bleep Bloop Brrrrmmp’. – Each EP has also included an impressive array of remixers including Byetone, Cosmin TRG, Modeselektor and Lazer Sword. – Which of these remixes are you most proud of?

I’d say my favorite is probably the Anstam remix of ‘Saccharin On Top” which is coming out on the ‘Fuzzy Numbers’ EP.  It really evolves in an interesting way. It’s dark but still kind of beautiful at the same time.

Your forthcoming release ‘Next 2 Last’ is split over 2 X CDs featuring 13 original tracks, 9 remixes and 3 exclusive digital downloads. – That’s a lot to pack into one package, why have you chosen CD format and not vinyl?

The limited edition colored vinyl EPs basically function as the vinyl version of Next 2 Last.  We wanted to collect all the tracks onto one release so people who may not have heard of me and my music could hear it all in one place.  Plus records might be commonplace amongst DJs and aficionados, but I have some friends who bought the EPs and can’t even listen to them because they don’t have turntables!

Where did you spend the majority of your time creating the album and with whom?

I made those tracks over a span of about 2 years while living in 3 different apartments in San Diego.  All those tracks were done solo, but I was collaborating on music with other producers throughout that period.  I think it’s the most valuable when you can do that in person.  Me and Mike Gao chop it up and show each other tracks for feedback all the time.  I’m sure we’ve rubbed off on each other a bit.

How do you go about creating your beats, what initially prompts you start working on a tune?

Lately I’ve been staring a lot of tracks by building around an acappella, an R&B jam or something like that.  Often times the beat will take on a life of its own, by the time I’m done the vocals don’t even fit anymore.  Other times I might just record a drum loop and noodle around on a synth for a while until something catches my ear, then I just build and layer from there. There’s really no formula, it varies.

In what environments do you find you work best in?

Well since I’m a hardware-based producer, I’m limited to work wherever my gear is.  For the majority of the last 9 years, that has been my bedroom.

I first discovered your music back in 2009 with your short music video ‘I Can’t Breathe’ x Miami Vice, a totally badass music video created by a guy called Oliver Input. –How did the two of you start working together and who suggested using clips from Miami Vice?

Oliver contacted me on MySpace and asked if he could use the track for a video he was doing.  He was already working on the video and when he heard the track it just meshed perfectly.  I was all for it, it’s an honour to inspire another artist.

Do you plan to create more music videos?

Definitely.  Right now I’m working with an artist named Ian Berenger on a video for my track “Next 2 Last”.  He’s really talented and even recorded some footage of one of my live performances.  I have also been playing around with video a bit myself, mostly sampling VHS tapes and running the clips through various manipulations live.  I plan on delving deeper into it now that I’m done with the album.

Do you foresee yourself remaining loyal to 50 Weapons and Monkeytown or do you envisage developing new sounds and venturing into new ventures and imprints?

I was a little unsure of how things would turn out with Monkeytown and 50 Weapons at the beginning since my music was so different from their other releases, but I think it’s been great so far and I see us doing more in the future.  I also want to team up on a project with a vocal artist, like a soul or R&B singer.  I’m not sure if that would be Monkeytown material, but I look forward to finding out.

Can you tell us more about your mix, the inspiration behind it as well as the reasoning behind your track selection / What type of atmosphere do you feel you’ve created with it?

I didn’t get too deep with it, this mix consists of tracks I’ve been feeling recently, plus a couple old favorites and of course some of my music.  I wouldn’t say there’s a particular theme but it’s kind of “pleasant” haha.

What can we expect from you over the next year or so?

I want to work on my keyboard playing skills.  I haven’t really planned out anything further than that.

Stay motivated, but don’t force it.