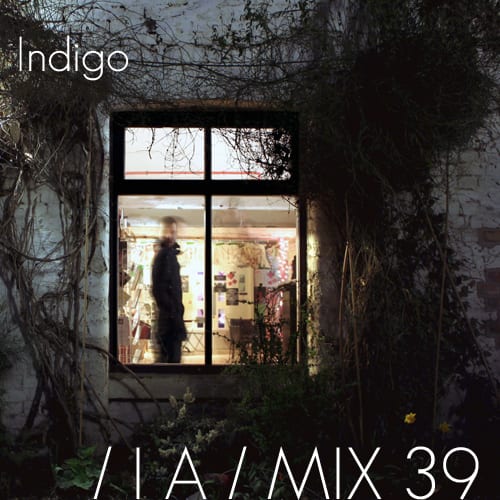 Man­ches­ter based artist Indigo has been blur­ring the ethe­real bound­aries of Elec­tron­ica since his first 12″ release on his own label ‘Mind­set’ in 2008. While some find a steady groove and set­tle into a for­mula, he has been evolv­ing with releases and remixes on a selec­tion of diverse labels, hold­ing a em foun­da­tion with his own imprint. Tak­ing all tem­pos and throw­ing them into a diverse melt­ing pot of son­ics, and per­form­ing mem­o­rable DJ sets to the same level of eclecticism.

We caught up with Indigo to find out about his musical background as well as delving into his motivation and determination on creating Mindset Records. His epic 41 track mix features tracks from some of our favourite producers such as Joe Babylon, The Black Dog, AnD, Resoe, Andy Stott, Dark Sky, Kahn, Synkro and many more.

For those less acquainted, could you tell our readers who you are, where you’re from and what inspired you to write music?

My name is Liam. I make electronic music and run an independent label, Mindset Records. I grew up in Rossendale, Lancashire but now live in Manchester.  I was always encouraged to be creative and have loved music all my life. Production was the one that stuck and was the most interesting. Haven’t had too much time to write recently, the label has taken up a lot of time and energy.

What were you listening to in your youth and do you come from a formal musical background?

I was brought up playing a few instruments, Piano & Trumpet mainly. I got my theory and practical grades up to level 6 and got bored long before I decided to give it up. I have a very short attention span so every college course I have started I’ve never completed! Everything that has been picked up is from experimenting on my computer or collaborating.

Earliest electronic stuff I can think of really getting into was The Prodigy, Aphex Twin, Lamb, Massive Attack, Photek and every avenue which splits from those. Came across early Dubstep & Basic Channel/Rhythm & Sound around the same time. Things have gone crazy since then.

Can you explain the motivation behind your mix, its track listing and what overall atmosphere do you feel you have portrayed in it?

I put together something with varying textures, tempos and sounds. I shortlisted about 120 tunes in my playlist for it and have been thinking for a while how I wanted it to go. Took me days to finally make a decision and record it and i’m happy with the way it has turned out. It ended up being just over 90 mins, that’s what felt right in the end.

There are a mixture of released and forthcoming material from artists and labels I really admire. At this time, I am feeling these kind of styles the most progressive, organic and unpredictable with a space you can really get lost in and submerge yourself into.

I’ve been told that you think Manchester’s music scene is overlooked, and that there are a wealth of quality producers not being listened to. Are any moves being made to raise awareness?

It isn’t overlooked, it’s just not publicised as much as it should be in my opinion. A lot of releases have come from Manchester this year on a good amount of highly respected labels across the board, so it has picked up a lot, so maybe more there’s more interest to come. Everything appeared to be London/Berlin/Bristol based but things are changing slowly. It seems things can only be accepted if they are sold or presented in a specific way by a select few.

Isn’t this something synonymous of music culture in general these days? Fragmented and clique?

Sign of the times maybe? I find it very hard to get my head around.

Nothing can evolve progressively when you have separation, classism and a hierarchy of individuals who like to think they can say what they like without thinking how their judgements and actions will affect people. It goes beyond reviewing music, when things get personal that’s when there is a problem. This ain’t just on a musical level, it resonates through every structure we have in place.

I’m tired of chasing acceptance and it’s made me realise that doing my own thing is the best way.

Could you describe your live sets? What type of mood and feeling are you trying to evoke, and do you play for the crowd?

I like to keep it interesting by just doing what feels right at the time, you must play for the crowd to some degree. I like to throw it around a lot and see what directions it can be taken. I’m taking some time out to work on new material, get deep into sound design and work on a full live show, away from playing a DJ set.

Your record label ‘Mindset’ sporadically puts out some great tracks. is this a case of quality over quantity, and can you explain the ethos of the label?

I would release a record every week if I could! It’s all down to time and money. I’ve never had any em intentions, I just wanted to see how it went and learned along the way. It’s been very up and down and I’ve had my fingers burned a few times, but it’s a learning curve I suppose.

I guess it has always been a childhood dream, I’d like to take what I’ve learnt and use it to progress the label as far as I can, I’m very hesitant to give up. I’ve sacrificed a lot of creativity and its been more work then I ever imagined, but it has taught me many things which will benefit me in the future. Finding a comfortable and unique place is what I strive for.

Do you have set goals when writing music? Certain atmosphere you want to achieve with each track?

I never have a specific thing in mind, however I might have a certain idea at the start but it always ends up changing to suit the mood as it changes through the day and night.

I love the creative space used in between the sounds, it sounds like you’re under water but also in a vast empty space. I never intend for the tracks to sound the way they do, it’s all been pretty flukey. Every track I’ve written hasn’t come out the way I wanted it to, but it is all coming a bit more refined.

I’d like to get my teeth into more sound manipulation and sampling weird tones and atmospheres by using the amazing tools we  now have. Using nature as a palette excites me a lot.

What environments do you prefer to create your music in? Where do  you spend the majority of your time working on making music and what studio[s] do you spend most of your time in?

It varies a lot. I used to make beats on my headphones either on my mates sofas or at home. Then I got a studio with some good monitors, but I’ve found that they’re obsolete for making electronic music and it kind of kills the creative process from my experience. That’s the advantage over ‘real’ musicians as electronic music can be made anywhere. So in hindsight, anywhere I can!

What is your personal philosophy on sound design?

I think its amazing how sound can be manipulated at this time, we have all the tools at our disposal and not that much progression has been made. Just the same things over and over, it’s all gone a bit stale on the mainstream. using the tools to create obscure and unique sonics and samples is my main goal for now.

Amon Tobin is an absolute don for this, he inspires me more than anyone I have ever come across.  I am very intrigued by the relationship between Sacred Geometry and Sound and going to work towards understanding the relationship between the 2 to compose with. I would like to hone my techniques and make my own interpretations of the artists I look up to.

Your collaboration with Synkro have produced awesome results, how did your friendship come about and do you still write together?

We met 4 or 5 years ago and worked closely since. We do still write together when we get the chance to. There are a few projects on the go now individually and as a unit. A few bits are in the mix. He helps me a lot with the label too, he has kept me grounded and I value his friendship very much.

Both of you have explored the minimal Drum & Bass headspace being released by the likes of Hospital Records and Autonomic. What attracted you to this and how do you see it being represented in the Drum & Bass scene at large?

I see it totally separate from the drum and bass scene and the only relation is the tempo. I think it has been shunned by a majority of the scene, so it definitely has its own select fan-base, which crosses over nicely with more experimental sounds. There is much more space to play with. I have a remix coming out of Joe’s tune ‘Progression‘ and my own 12″ coming as well, they’re both to be release on Exit Records and I’m also in contact with Darren (dBridge) pretty often.

I’d like to make an album at 170bpm, I’m bored of writing 12″ singles. I hope my sound will translate well onto an LP. I enjoy building journeys rather than writing formulaic club tracks.

Could you give our readers an  insight into what your listening to at the moment?

At this moment I’m listening to Bvdub’s 2 Hours & 20 Years from the Headphone Commute website. I love Rob Booth and his Electronic Explorations show, been following since the first show and been lucky enough to do my own mix. You should always must keep up to date with that.

Any producers you’re particularly pushing or working with currently?