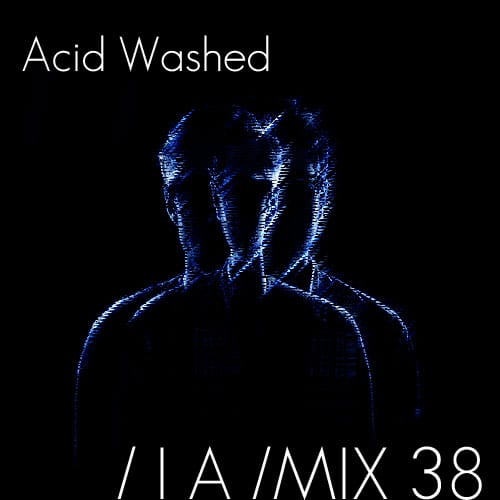 Acid Washed is a two-man process primarily, deteriorating sound amongst souvenirs, friends, home studios and analogue equipment. It follows the blueprint devised over the past two year by Richard D’Alpert and Andrew Claristidge: two DJ’s keen on using modern and vintage equipment to create sophisticated electronics with a sharp pop aesthetic.

We caught up with Acid Washed to discuss their musical roots and how they developed their acid tinged aesthetic with Anthony Burrill. Their mix showcases their adoration for the UK scene and pure hedonism, as they say “it’s music you can listen to in a club, whilst traveling and definitely whilst cooking.” The mix features tracks from Arnaud Rebotini, Khan, Eli Escobar, Discodeine, Kidzz and many more.

For those not aware of Acid Washed, please can you introduce yourselves, tell us where you’re from and tell us what are you’re currently up to?

Andrew: We are Andrew Claristidge and Richard D’ Alpert from France. We are preparing to release our new EP later this year and are also working on our new album to be released in 2012.

What circumstances of events led up to you meeting one another?

Andrew: Well it’s a funny one. We had some friends in common and the first time we met was in rue Saint Denis in the red light district because our friend was working in a sex shop.

Richard: Sadly, I was very very young…already hanging out in the red light district…

What are your musical roots – are you both classically trained, or self-taught musicians?

Andrew: We are not really classical trained musicians, I consider myself as an autodidact. My roots are broad, my dad listened to Kraftwerk, Jean Michel Jarre and Deep Purple, while my mum would listen to Blondie and Philip Glass… A nice mixture. A kid from the 70´s…

Richard : I’ve played the piano for a while, but have never been that good at it, but I’m good at being a “pianoter”, which in French could mean something like “finding some simple but nice melodies”. For the rest, the Beach Boys are the only Gods I celebrate.

Andrew: I was born with it dude! In the 70’s and start of the 80’s all the TV themes were electronic music: Jean Michel Jarre, Joel Fajerman. Plus the big boom of Acid House  at the end 80’s when I was an adolescent. It is part of my whole life.

Richard: Yeah well, Andrew always like to pretend that he’s as old as Gandalf in Lord of The Rings, but in the 70’s I’m not even sure he was big enough to understand anything about electronic music.

Seriously though, as a child in the 80’s, you were surrounded by this “simple but nice”, cheap but well-arranged electronic music, all this vintage stuff that loads of us now consider a great era for music, which I find vastly over-exaggerated!

On Facebook, anybody posting something with this kind of late 70’s-early 80’s cheap TV-orientated electronic music think it’s great only because of it! The truth is : most of the production back then was 100% shit! That’s my humble opinion, and again, I’m not a skilled musician!

The track ‘General Motors, Detroit, America’ proclaims your respect for the music that Detroit has coined. What is it that you both admire about the sound of Detroit?

Andrew: The sound of Detroit is something you can recognize easily because it is deep, melancholic and powerful. Techno was born. Juan Atkins was putting the first brick of the building we live in now…Detroit is the basis of modern electronic music.

Richard: For me it proclaims my respect for the 19th and 20th century working class in the Western World, thanks to whom you can now toast your bread in the morning, and that the liberals sacrificed without mercy in the late 80’s (that’s for you, Mrs Thatcher).

What are the highs and lows of living and working in Paris? Do you find the city constraining, or inspiring for creating music?

Andrew: Well I am living in Berlin. I lived in Paris when I was adolescent. But Paris is very inspiring and each time I am there (which is very often) it fills me with new ideas.

Richard: Paris is filthy, unpleasant and mean. This is why I think it’s the greatest city on the planet. It still didn’t surrender to the mainstream and to this disgusting politically correct bullshit that you find way too often everywhere else. Paris has the personality of a bitch. A cultured bitch who doesn’t want to be something she’s not. And I’m sorry, but that’s great!

Since you started working together as Acid Washed, what traits do you feel you have developed and improved on significantly?

Andrew: Our technique has become more and more accurate, capturing the sounds we wanna reach.

Richard: My amount of miles. Massively. Believe me.

What do you have lined up for the remaining months of 2011 and for 2012? Another album, remix EP, visuals?

Andrew: A new EP is ready and will be released early December. The album will be out in 2012 – both via Record Makers.

We also did remixes for Arnaud Rebotini & Yuskek to name a few. Those one will be out very soon. An art project with Anthony Burrill.

Richard : Touring the world an other time? “Allez”, one more round, bitches!

What environments do you find the most inspiring to create/write music in?

Andrew: My country house in Bretagne, planes and my studio in Berlin.

Richard: My friends & fellow electronic music producers give me ideas, give me the strength to imagine new collaborations: working together is the key. I’m a socialist after all.

How did your working relationship with Anthony Burrill come to fruition and how has he helped shaped the sound and vision for Acid Washed?

Andrew: It came about through our label, Record Makers. It is like a friendship, you cannot really explain it but it works. We love his work, he loves our music. It all becomes obvious.

Richard: Anthony is a full member of Acid Washed. I think he’s a socialist, but I never asked so don’t quote me on that. Anyway, he’s from Manchester, so we love him.

Having worked with Anthony to create the Acid Washed aesthetic, how do you see yourselves progressing this look? Do you have any other artists lined up to help define your look?

Andrew: We will still continue to work with Anthony and we will become more and more human…with a face.

Richard: Fabien Hebert aka Keffer, who does our press pictures. He’s a great talent and a great friend.

What producers and DJs do you think deserve recognition?

Andrew: Christophe Chassol (man you are a genius), Steve Moore, our buddies Anteros & Thanaton, our partners in crime  Kill The Tills, Hugo Capablanca and T. Keeler, Leonie Pernet… and so many more!

Andrew: I hope the end of the world is not happening soon.

What was the inspiration behind the mix and artwork you’ve crafted for us?

Andrew: Pure hedonism, great music you can listen to into your car, in a club, while cooking.

Richard: Love for the UK and its music since FOREVER.