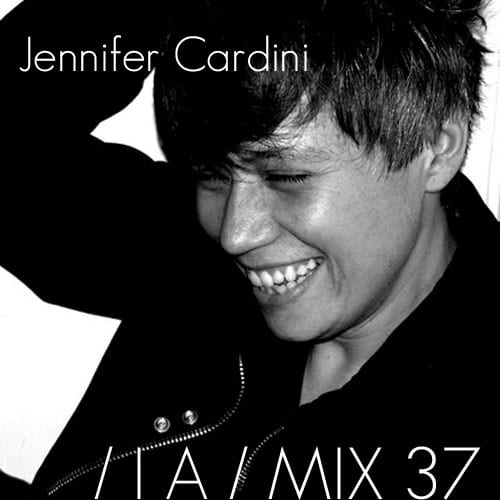 Our final Alpha-ville mix comes from the Cologne based DJ, producer and label owner Jennifer Cardini.

Since moving from Monte Carlo via Paris to Cologne, Jennifer has enjoyed an illustrious music career flexing her resident DJ skils in two of Paris’s most influential establishments, Rex Club where she hosts a bi-weekly night “Correspondant” and Le Pulp – a small lesbian club that soon became “the venue” for underground and avant-garde electronic music in Paris as well as an international techno sensation that catapulted her, along with French DJs such as Ivan Smagghe and Chloe, into the forefront of European nightlife.

Where are you at the moment and what are you up to?

I’m in my studio with Nhar AKA Bernard Siefert working on some remixes and finishing my new EP.

Can you please explain your mix, what was your inspiration behind the mix, its track listing and what overall atmosphere do you feel you have portrayed in it?

The mix was done very early in the morning, which explains the down tempo and the melodic atmosphere. I love listening to music and recording mixes when I wake up. I wake everyday very early, like 7am and I love the solitude of my flat. The fact that there are no noises from outside makes it the perfect place listen to music. The mix features tracks from the next few releases on my label Correspondant.

Before you moved to Paris in 1998, where did you live and what were you up to?

I was born in Monte Carlo and there aren’t so may things to say about it, as nothing really thrilling happens there!

What’s your musical heritage? What did you grow up listening to, and are you classically trained or self taught?

I’m self taught. My parents had really bad taste in music (sorry mum and dad!) and I guess school, older friends and girlfriends helped me a lot. Due to my age I’m of course influenced by the 80, but my musical biography is still work in progress. Despite my cold influences hanging out with fans of disco and soul like MDCE or cooking with my girlfriend who loves classical music pushes me to be open and curious.

You’re inspired by the sounds of Detroit, Chicago, and Cologne. What is it about these sounds that turn you on?

It’s a bit stupid and cliché but when I first heard Aphex Twin I was really impressed by the fact that you could make machines speak. I would say that the emotion and melancholy of those sounds impressed me.

I don’t think I have one as it is more a gut thing for me, like an impulse.

In Paris you forged your career as a full time resident DJ at Le Pulp and Rex club, how did this opportunity arise and who/what responsible for making this happen?

In both cases I was asked to become a resident at both clubs, friends like DJ Sextoy or Kevin Scherschel recommended me to them.

What are your all time best memories from your time spent in Paris and the club scene?

Any night at pulp when the air conditioning was broken at around 5:30 am!

In comparison, how does Cologne compare to Paris for progressing your career? Do you see yourself settling elsewhere in the future?

For the moment I’m happy here in Cologne. I’m trying very hard to build things up here. It took me a while to realize that Paris on a daily basis was not for me anymore, Cologne is peaceful and fits into my lifestyle better.

You’ve just launched your own imprint ‘Correspondant’. What criteria led to you developing this new venture, and what new elements and sounds do you envisage the label bringing to the scene?

We’re open to all kinds of good music! We don’t want to put limit ourselves and release only dance music.

‘Correspondant 03’ features Clement Meyer and Abe Duque. What is your relationship with these two artists and how did you get them involved with this release?

I’ve known Abe Duque for a long time, Clement Meyer has always been on the radar as he’s releasing some outstanding music. It was his idea to ask Abe.

Who’s responsible for the mastering and production of all Correspondant releases?

Jorg Burger is doing the mastering and Correspondant is part of Kompakt distribution, so they’re looking after that.

Where do you feel most comfortable in to create electronic music?

In my studio here in Cologne.

Over the years you’ve built up a close relationship with Kompakt, you’re also the first French woman to be signed by the label. How did this relationship begin and develop into such a em bond?

We met years ago and became friends, we enjoy working together. Kompakt is my family and I feel at home with them in Cologne.

When performing live, especially internationally, how do you go about selecting records? Do you just grab a slab of wax from your shelves and see what happens or do you plan it meticulously?

I always have a quiet day at home listening to my promos and new records, I then build up my record case for the weekend

What challenges and limitations have you faced since starting out on the electronic music scene?

As a challenge I would say not getting lost in the amazing amount of minimal promos I get and I think it also works for the limitation.

What can we expect to hear from your performance at Alpha-ville festival?

Are you an evangelist of modern culture? How important is digital technology/art and social media for you?

No I’m not, at least not for music. I think we lost sound quality by going digital, most of the music I buy online or get in promo pools don’t sound as good as vinyls at all.

What does Alpha-ville festival mean to you? Will you be stopping by to see / listen to any other performers at the festival?

Of course the festival looks thrilling, I’m very curious about ‘The Johnny Cash Project’ and Identity.