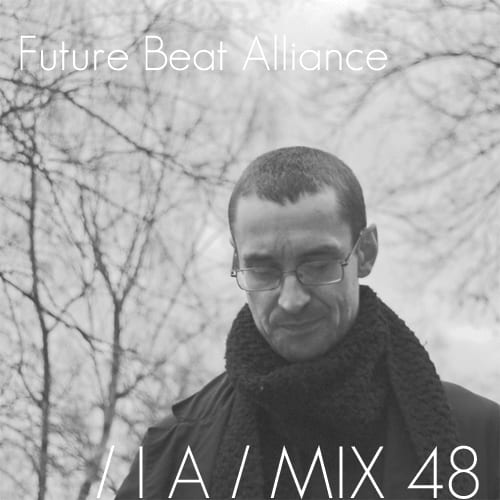 As 2011 draws to a close, we’re proud to present a mix from Future Beat Alliance aka Matthew Puffett – a true veteran of the electronic scene with releases on Void, Delsin, Ferox, Archive & Versatile to name but a few. We caught up with Matthew in Berlin a few weeks back near his Friedrichshain studio over Irish coffees and got the lowdown on what the future holds for FBA, after a pair of glorious EPs on the revitalized Tresor label and his Radio Drama residency (first Wednesday of every month) there with Vince Watson.

Please introduce yourself and tell us where you’re from and what you’re currently up to.

My name is Matthew Puffett and I produce electronic music under the name of Future Beat Alliance. I was born in Oxford in the UK and have been living in Berlin for the last 2 years.

What’s your musical background? who/what was responsible for getting you into making music and into the industry?

I guess it was just going record shopping every single week from a very early age, and being exposed to so many different styles of music at that time – it was mainly hip hop right at the start and all the documentaries about its culture. There were these two documentaries, Bombing and Bad Meaning Good; They were just brilliant! At that time as a kid, they made you feel like you had to be part of something creative.

After the hip hop period and several clubs / outdoor events later I became totally obsessed with the clonkey soulful sound of Detroit techno and still am to this day. This was all filtered to me through Lee Grainge at Fat Cat Records and Colin Dale’s UK radio show on Kiss FM, The Abstract Dance. This show was the best! There was this section he did at the end called “The Outer Limits” where he would play tracks by Front 242 , Model 500, and loads of obscure German/ Belgian electronic bands, It was such an exciting time for dance music and a huge inspiration. That’s what made me create my own.

Please can you expand on the mix you have recorded, what’s the logic / reasoning behind your track selection and what kind of mood do you think your mix is perfect for?

The mix I did for / IA / is basically how I have been playing out at our night Radio Drama at Tresor except it’s much slower here. Most of the tracks on this mix are originally 127 bpm / 130 bpm main room bangers, but I decided to bring it down to 110 bpm for this mix, I think it gives some of the tracks a totally different mood, a more industrial soul feeling!

How did you come up with the name, future beat alliance?

It’s taken from an Afrika Bambaataa and Soul Sonic Force “Renegades Of Funk” record sleeve, in the corner there is a small stamp which says approved by the Future Beat Alliance. I actually hate the name now but just carry on with it… .

What are your musical roots – are you classically trained, or self-taught?

I guess my musical roots would come from a lot of 80s soul music, my brother was hooked at the time, he used to collect so many soul records and religiously record the Robbie Vincent soul shows, he was always in the next room with the volume up, so I guess that has always stuck with me when I’m writing, then obviously being exposed to acid house and all the great spinoff genres and not forgetting early Detroit techno. I’m not classically trained, I’m just obsessed with programming chord progressions / sequences and trying to find the right notes.

Any given moment as a kid I used to surround myself with it, I think my first 7″ record I brought was by The Human League, then I think my neighbour introduced me to the electro 1 cassette. I couldn’t wait to get my own copy to play on my twin cassette Alba Stereo system. I have not changed one bit, I’m still hooked on discovering new sounds.

What are the highs and lows of living and working in Berlin? do you find the city constraining, or inspiring for creating music?

The first year I was here I felt so inspired, the buzz of living in a new city with so many like minded interesting people, I made so much music but then the night life tended to take over a little bit and take its toll, but generally yeah I think it is really inspiring – you just have to get the balance right if you like going out like me.

How did your relationship with Tresor come about?

Through a friend of mine Simon Ashcroft who they brought in to revamp and kick start the label again as it was inactive for a few years. Simon just called me up and asked if I wanted to be the new artist on Tresor..So I got a bunch of demos together and we went from there and did 3 records. He was a great driving force behind all of those releases, he gave me and the label a massive kick up the arse.

You have a long-standing relationship with James Lavelle, tell us something we don’t know about him.

Yeah he’s one of my oldest friends, we haven’t met up so much over the last couple of years due to me being here in Berlin and he’s always touring or with some new project. We’re meeting up in a few days though when I go back to UK for Christmas. Something you don’t know about Lavelle. . .hmmmm, where shall I start?! He thought a brick wall was breathing one night!! I’ll leave that one there though.

What is your preferred medium and why?

I don’t really have one now, as long as it sounds good coming through a pair of speakers, that’s fine with me.

What other producers do you think deserve some serious attention?

I think Andy Turner and Ed Handley (Plaid) are true innovators, they are just in a world of their own with their sound. I absolutely love the new John Tejada LP, such a great producer. I also got introduced to a band called Mirror Mirror which I would love to explore, there are too many to mention, so much great music around.

Continuing our Radio Drama night at Tresor with some great guests lined up. I’m also starting with a new booking agency for gigs in Spain, Ona Booking, which I’m really looking forward to. Another EP for Tresor, remixes and loads of studio work as always… Looking forward to getting stuck into the new year.

Forget Everything and Remember