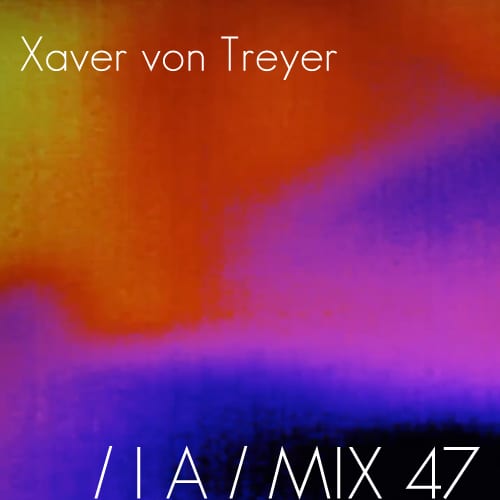 Xaver Von Treyer, formerly Naudascher, should be familiar to any self-respecting fan of the dark, treacherous boundaries between disco and techno. Over the past six years, his label Supersoul Recordings has boasted a heady list of releases including the much celebrated Moon Unit project with Paul Mogg, Walter Jones, Plastique de Reve as well as the Nobody Knows Anything compilation, released in collaboration with Death From Abroad (DFA’s international-minded sister label).

2011 has really seen a change of pace for Xaver with the release of his debut album, The Torino Scale, an eleven track exploration of the Supersoul sound – built on strong connections to dance music (Krautrock, italo, Chicago, Detroit) without being nostalgic or exclusive to one style. You need to check it out if you haven’t already. In the meantime bask in his glorious cinematic mix and forthright observations on the industry today.

PLEASE CAN YOU INTRODUCE YOURSELF, TELL US WHERE YOU’RE FROM AND WHAT YOU ARE CURRENTLY UP TO.

I am Xaver von Treyer, I live in Berlin and I am slowly shutting down my engines for the end of the year as I had a very exciting and packed 2011: two film scores and one album including coordinating its release as label manager are quite a bit of work for one year. Inverted Audio Mix is definitely the last task for 2011.

PLEASE CAN YOU EXPAND ON THE MIX YOU RECORDED FOR US, WHAT’S THE LOGIC / REASONING BEHIND YOUR TRACK SELECTION AND WHAT KIND OF MOOD DO YOU THINK YOUR MIX IS PERFECT FOR?

I wanted to pay a tribute to film music that has a sense of groove without being strictly dancey. I think it sums up a general vibe of my album even though none of the tracks resemble any of mine. I also wanted to avoid putting my own music in the mix as I have developed a real disgust for the self-promotion displayed by most DJs these days when it comes to DJ charts and mixes. It’s really sad and depressing how desperately people need attention and validation for their stuff to pass it onto distributors and press in order to get coverage and hope to sell a few copies. I often feel like we are under a dictatorship…

FORMERLY KNOWN AS NAUDASCHER, WHY THE SWITCH TO VON TREYER?

I got married in 2009 and as it was clear my wife didn’t wanna give up her name I decided to take hers. I love the sound of it and I took it as a chance to re-brand myself without coming up with fake and corny pseudonyms. I was tired of my work situation, always teaming up with lazy DJs who don’t even know how to operate a drum machine but taking all the credit for the creative content of the production. I needed to re-invent myself and break with the past.

Now I can pretend I belong to aristocracy… well not really. Actually there’s no title attached to the name, it was a gift to my wife’s great grandfather from a Russian Czar in return for good work at the Russian court in the late 19th century.

WHAT ARE YOUR MUSICAL ROOTS‚ ARE YOU CLASSICALLY TRAINED, OR A SELF-TAUGHT MUSICIAN?

I did receive some basic guitar playing lessons eons ago… but I am a crappy guitarist. I am an autodidact in terms of music but classically trained in audio engineering.

WHAT ARE THE HIGHS AND LOWS OF LIVING AND WORKING IN BERLIN? DO YOU FIND THE CITY CONSTRAINING, OR INSPIRING FOR CREATING MUSIC?

I love Berlin, and sometimes I hate it. It’s full of wonderful people and idiots… Just like any city or family or tribe or school or workplace. It’s still cheaper than a lot of other cities with comparable cultural diversity and good infrastructure which makes it a real winner. I cannot see myself leaving it for good anytime soon. It has a positive effect on creativity as it’s cosmopolitan and diverse, and kinda rough around the edges.

THE STARTING POINT FOR THE TORINO SCALE IS THE NOTION THAT AN ENTIRE PLANET CAN BE WIPED OUT ENTIRELY, WHAT IS THE CLOSEST YOU PERSONALLY HAVE COME TO TOTAL ANNIHILATION?

I once almost died hiking in the mountains. I fell 40 feet into a glacier stream, rolling down a steep river bed, hitting my head against a tree before falling into the water. Luckily I didn’t pass out. I then had to climb out of the river (freezing water). I was by myself which means had I passed out I would have drowned.

WHICH COLLABORATION ON THE ALBUM ARE YOU MOST PROUD OF?

I am proud I managed to convince Nadine Khouri (see the We Are Alien video with Tyra Banks) to sing on one of my tracks… She comes from a very different genre (indie-folk) and I thought at first she would turn me down. I think We Are Alien turned out great, I love her voice.

HOW DID THE LINKUP WITH TYRA BANKS WITH ‘WE ARE ALIEN’ COME ABOUT?

Marcus Gaab, who shot the smoke cover for my album, made a photo shoot with her for his magazine I Love You. He asked me if he could use some of my music for the video featurette on the shoot. The result is great… Apparently even Jay Z liked it (that would be an immense honour if that is so). Weird to be part of something that gets such massive exposure (almost 5 million Twitter followers and 1.5 million Facebook fans)… Bizarre.

WHAT IS YOUR PREFERRED MEDIUM AND WHY?

Every medium has its advantages and perks. Vinyl is sexy and awesome, CD is practical for listening to albums and MP3s are easy to send, manage and consume.

WHAT OTHER PRODUCERS / COLLECTIVES DO YOU THINK DESERVE SOME SERIOUS ATTENTION?

I have yet to hear a Tigersushi release that is really shitty… I also like Cosmo Vitelli’s style in making music. And I think the Optimo DJs are great, everybody can learn from them, true music lovers to the death.

WHAT DO YOU HAVE LINED UP FOR 2012? MORE RELEASES ON SUPERSOUL?

Of course, but it’s a bit early to say too much. I am planning a release with a Dutch producer whose music I really like. And I wanna release an album with an American actress who makes awesome indietronica folk stuff with a friend from NY. She is quite a star as actress but is really gritty and underground in terms of music taste and approach… great stuff. I hope it maps out.