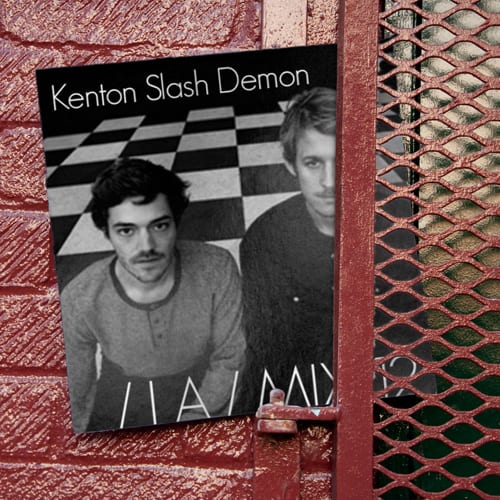 Our 12th IA mix comes from Kenton Slash Demon, otherwise known as Jonas Kenton and Silas Moldenhawer, two young gents who also form half of the Indietronic pop band ‘When Saints Go Machine’. 2010 has been the beginning of their “Schwarzschild Solution” a trilogy of EP’s released throughout the year, ‘Sun’, ‘Matter’ and ‘Daemon’ which will be released in 2011. From what we’ve heard from their first release, ‘Sun’ we gave this remarkable band top marks for their originality and overall energy. This is a live recording from Kenton Slash Demon’s performance at Spot Festival 2010.

IA: Firstly thanks for taking some time for answering our questions, can you explain how you two met each other?

KSD: You’re welcome. Thanks for having us. As kids we went to the same school. We have known each other since we were thirteen years old.

IA: What did you both want to be when you were younger?

KSD: Jonas was a boy scout when he was a kid, so maybe something where you are close with nature. I wanted to be a Drummer or a Rapper.

IA: What’s your musical background, are you classically trained or strictly electronic?

KSD: No not really. I’ve been playing drums since I was ten years old, but we actually both started on the computer. We made our first track in Cubase 1.2. At that time we were really into Psych Trance but we only had a standard midi interface, so it was a challenge.

IA: How did you break out from being amateurs to professional musicians?

In 2005 we began sending out demos, and one of them got picked up, so I guess at that time we went from amateurs to pros, even though we didn’t make any money.

IA: Who has helped you get to where you are now?

KSD: Tartelet Records helped us a lot and of course our beautiful manager and friend Lisa Marxen.

IA: What music did you listen to whilst you were growing up?

KSD: As kids we listen to mostly electronic music, except from maybe Metallica and NWA. Now we listen to all kinds. We’re both fans of music and spent a lot time checking out different scenes and new bands.

IA: What elements from the past have you brought into your music?

KSD: We work for a long time on each track. We’ve always done that. I think you can hear that in our music. We like to let the track slowly take form and we rarely force the process. We appreciate it when you can hear that an artist has spent a lot time and thought on a song.

IA: Do you have a fascination with space and the universe?

KSD: We wanted to connect the releases. We don’t have a special fascination with space but we just thought that all the tracks had a space kind of sound to them, and together with Zander, who did the artwork; we came up with this idea where titles, artwork and sound had a connection.

IA: What do you feel the aims and purposes are when creating your music and what effect would you ideally like to have on your listeners?

KSD: We love club music and we take it very seriously. Club music is very honest, but sometimes it can seem superficial. We want to put all of our emotions into a kick drum, and make you feel stuff.

IA: In your opinion, does your music appeal to a niche or universal audience? What kind of people do you think would enjoy it?

KSD: We’ve worked on giving each track a wider appeal. It’s still club music, but there is a lot of melodic elements, which makes the track appeal to more people I think, it’s all about melody for us. ‘Sun’ is a track that works in the club but it’s still a track you can put on when you’re pouring your morning coffee.

IA: Your website for the Sun EP draws the viewer into a black hole, what’s the story behind this?

KSD: The website is three animations which uses the cover artwork from the EP’s. First ‘Sun’, then ‘Matter’, then “Daemon” (the black hole). The whole idea is inspired by German physicist Karl Schwarzchild’s theories.

IA: What can we expect from your next two EP’s, more remixes?

KSD: The two EP’s pick up where ‘Sun’ left up off. They kind of have the same sound to them, which was the idea. I think we’ll do some remixes, but we mainly want to focus on original material.

IA: Can you summarize the process you go through when creating your music?

KSD: We usually create the basis of a track separately, and always finish it together. Sometimes it’s a sound or sample that inspires us, or it might be an overall idea. We always think a lot about the sound while we work on a track.

IA: What can we expect from you guys in the next year?

KSD: A lot of new music, maybe a full length… will see.