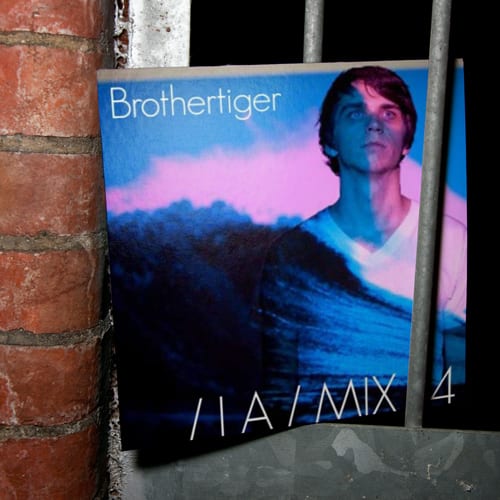 Our fourteenth exclusive IA MIX comes from Brothertiger AKA John Jagos . John produces music that is much akin to the summery chill-wave sounds of Toro Y Moi and Washed Out. We featured John’s excellent Vision Tunnels EP earlier this year, since listening to Brothertiger I haven’t looked back.

The mix features tracks from the likes of J Dilla, Dam Funk, Caribou, Toro Y Moi, M83 and many more. It’s the perfect companion for chilling in the sun, lazy, hazy and totally sun-drenched, enjoy it.

IA: Hi John, thanks for taking the time to speak to us. So let’s kick things off with what’s behind the name of ‘Brothertiger’ – did your brother get eaten by a tiger or something along those lines?

Ha! Well first of all, I don’t have a brother, so that’s not the case at all. I really just thought of the name one day, and I liked how it combined human and animal characteristics together, so it kind of just stuck. I also love tiger stripes.

IA: What’s your background, both personal and musical? Where are you from, and what have you been doing for the past year?

I grew up in Toledo, OH and I go to school in Athens, OH at Ohio University. I started playing music when my parents basically forced me to take piano lessons at age 11 or 12. I took lessons for about 3 years and then learned guitar. I didn’t really start recording things until I was about 15. Around then I’d been involved in a few bands and music projects with some high school buddies. And it wasn’t until about a little over a year ago that I started making music on my own like I am now.

This past year has been great! I’ve been living in Brooklyn for the summer working in a recording studio in Williamsburg (The Gallery) and it’s been an awesome experience. I’ve also had the opportunity to have a couple shows here. I have one more and then I go back to Ohio in a few weeks.

IA: What did you want to be when you were a kid?

Oh wow. There were so many different dream occupations for me. I definitely wanted to be an astronaut (still do). In middle school some friends and I wanted to be in a rock band, though the only one who knew how to play an instrument was me. At one point I wanted to play baseball for the rest of my life. All these dreams came and went quickly.

IA: What mischief did you get up to at college?

Well I’m still there, so there’s plenty more mischief to be had! I haven’t considered myself wild in college at all. I go to a big party school, and our big things are Halloween and spring street fests. There are so many ridiculous drunk people there that provide countless hours of entertainment on the streets. My friends and I would always go into random house parties and hang out, since nobody ever pays attention to who comes in. Free Natural Ice and Keystone Light always lure me in for a good time.

IA: What are the most important factors behind your music? Are you trying to convey something (a felling or something) to your listeners?

Most of the music that I make is all about just living life to the fullest and having a good time. Summer is my favourite season, so I like to bring that into the music as well. Some of my favourite memories have occurred in the summer, so I like to write about them. I’ve noticed that being a young person in this time can be tough because of all these worries about the future (i.e. money, job, success, failure) so I like to counter that worry in a sense through songs, if that makes sense.

IA: Your current EP ‘Vision Tunnels’ has a very woozy, summery vibe to it. Is this all you have to give, or are you working on some other musical sound / aesthetic?

Yeah that EP does have a singular musical theme to it, but the most recent stuff I’ve been working on has a slightly different feel to it. I love disco music, so that’s definitely been a big influence on song making for the past 3 months. I don’t think the aesthetic of a good time summer vibe will change too much, but there will be some variation in the sound and feel for sure.

IA: How do you differentiate your sound to the likes of Toro y Moi and Washed Out?

I think Washed Out really emphasizes keeping the sound very vintage, which is really cool. Most of his songs sound like they were recorded on a cassette machine underwater. He has a really steady sound he conveys and I think it works well. Production wise, I don’t really stick to having one song dynamically sound like the other. I like to experiment and jump between genres a bit.

Toro Y Moi really knows structure well. I’m so envious on his song writing skill. Listening to his songs, you can just tell that he’s so musically talented and has these really awesome chord progressions and melodies. I think my songs are a bit simpler in structure.

IA: Can you explain the process behind making your music (does it possibly involve Peyote / Mescaline?)

Unfortunately, no it does not. I use a bunch of different software to make the rhythms and synths and such. I’ll generally come up with a beat first and build upon that. I’ll get a general melody going and then figure out what I want the song to be about. A lot of times I’ll just have it on loop just singing freestyle until I get something good. Then I’ll actually write REAL lyrics. I’ll mix it all in using Logic Pro.

IA: Who / what has influenced you to create your music?

My dad taught me how to play guitar and got me into music at a young age, so he’s the primary person to thank. My girlfriend has been so awesome and supportive of all of this. She’s always giving me good advice in working with the music business. David Byrne and The Talking Heads have been a big influence on me, as well as Brian Eno. There are countless bands that I love listening to that have been such a huge influence on my music and the way it sounds.

IA: Who / what’s really exciting you musically at the moment?

I’m really loving Baths right now. Also, David Byrne has been working with Fatboy Slim on this new concept album about a former Queen of the Philippines. They’ve been working with so many great artists on collaborations. I’m definitely excited for Washed Out to release an LP.

It’s hard to describe. And it also depends on where you are in Ohio. In Toledo, it’s not so hot. It’s mainly metal and classic rock cover bands. In Athens, there’s some cool stuff happening. I’ve played a few shows with some really awesome bands heavy in experimental. I think Athens has the most diverse music scene in Ohio. Columbus also has a great scene.

IA: What’s next for Brothertiger?

I’m definitely aiming for a full album soon. Possibly a small tour wherever I can fit it in. I’ve got a good amount of new songs that I’m really excited about!